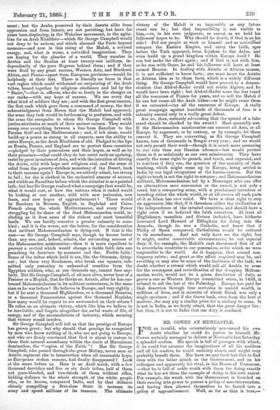 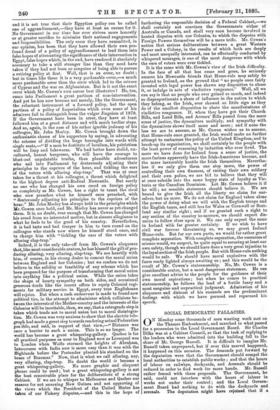 FOR an invalid, who ostentatiously announced his own doubt whether he could do justice to himself, Mr. Cowen certainly managed to deliver at Newcastle last Saturday a splendid oration. His speech is full of passages with which, if he could but saturate the imaginations of all his auditors and all his readers, he would certainly charm and might very probably benefit them. Nor have we any fault but this to find even with the bitter attack on the Government, and on his colleague and apparently his rival, in the House of Commons, —that he is full of noble wrath with them for doing exactly what he has set them the example of doing in his own career. For example, his wrath with the Government is founded on their coming into power to pursue a policy of non-intervention, and having then allowed themselves to be forced into a policy of aggrandisement. Well, so far as that is true,--

and it is not true that their Egpytian policy can be called one of aggrandisement,—they have at least an excuse for it.

No Government in our time has ever striven more honestly or at greater sacrifice to minimise their national engagements and responsibilities. The only error they have committed, in our opinion, has been that they have allowed their own pro found dread of a policy of aggrandisement to lead them into false hopes of attenuating the significance of their intervention in Egypt, false hopes which, in the end, have rendered it absolutely necessary to take a still stronger line than they need have taken if they had not been so sanguine of being able to pursue a retiring policy at first. Well, that is an error, no doubt ; but in times like these it is a very pardonable error,—a much more pardonable error than the error which led to the seizure of Cyprus and the war on Afghanistan. But is it not the exact error which Mr. Cowen's own career best illustrates ? He, too, came into Parliament a great partisan of non-intervention.

And yet he has now become not merely, like the Government, the reluctant instrument of a forward policy, but the open partisan of a policy of Imperialism which even some of his admirers fail to distinguish from the vulgar Jingoism of 1878.

If the Government have been in error, they have at least followed him at a great distance and with much tardier steps.

And so, again, in the case of his rather ignoble jealousy of his colleague, Mr. John Morley. Mr. Cowen brought down the enthusiastic cheers of his supporters by saying, in advocating

the scheme of dividing the large boroughs into wards with single seats,—" If a man be destitute of localism, his patriotism will be limp and lukewarm. We bad better have stolid, uncultured, honest burgesses, who will have the courage to blurt-out unpalatable truths, than plausible adventurers who sail into Parliament by dexterously adjusting their principles to the caprices of the hour, and tickling the ears of the voters with alluring clap-trap." That was at once taken for a thrust at his colleague, a thrust which delighted to the highest degree anti-Radical Newcastle. But surely no one who has changed his own creed on foreign policy so completely as Mr. Cowen, has a right to taunt the rival who now preaches what he himself once preached, with " dexterously adjusting his principles to the caprices of the hour." Mr. John Morley has always held to the principles which Mr. Cowen once held, and Mr. Morley has never as yet changed them. It is, no doubt, true enough that Mr. Cowen has changed his creed from no interested motive, but in sincere allegiance to what he feels to be the good of his country. Nevertheless, it is bad taste and bad temper in him to turn round on the oolleague who stands now where he himself stood once, and to charge him with "tickling the ears of the voters with alluring clap-trap."

Indeed, it is the only take-off from Mr. Cowen's eloquence that, like most considerable orators,he has himself the gift of producing alluring, very alluring, clap-trap. We are heartily with him, of course, in his strong desire to cement the moral union between England and her Colonies ; but we confess we do not believe in the solidity or feasibility of any scheme which has been proposed for the purpose of transforming that moral union into anything like a political union. While the union takes the shape of hearty sympathy on both sides, and occasional generous deeds like the recent offers to equip Colonial regiments for military service in Egypt, every true Englishman will rejoice. But when a rash endeavour is made to found new political ties, in the attempt to administer which collisions between the interests of the Mother-country and the interests of the Colonies will be inevitable, then, we say, that a retrograde step is taken which tends not to moral union but to moral disintegration. Mr. Cowen was very anxious to show that the electric telegraph had made a great step towards rendering actual Federation pos,ible, and said, in support of that view,—" Distance was once a barrier to such a union. This is so no longer. The world has become a great whispering-gallery. Quebec is for all practical purposes as near to England now as Liverpool was to London when Wolfe stormed the heights of Abraham. Intercourse with India now is more easy than it was with the Highlands before the Pretender planted his standard on the braes of Braemar." Now, that is what we call alluring, nay, very alluring, clap-trap. No doubt the world is become a great whispering-gallery. No more graphic and eloquent phrase could be used ; but a great whispering-gallery is not the best conceivable place for the deliberations of a strong Cabinet. If we are to whisper to Melbourne and Quebec our reasons for not annexing New Guinea and not approving of the views which the President of the United States has taken of our Fishery disputes,—and this in the hope of

furthering the responsible decision of a Federal Cabinet,—we shall certainly not convince the Governments either of Australia or Canada, and shall very soon become involved in heated disputes with our Colonies, to which the disputes with Foreign Powers themselves will be a mere trifle. Mr. Cowen's notion that serious deliberations between a great Western Power and a Colony, in the results of which both are deeply and most unequally interested, can be effectually conducted by whispered messages, is one of the most dangerous with which the ears of voters were ever tickled.

It is the same with Mr. Cowen's view of the Irish difficulty. In the face of all that has come and gone, he seriously assures his Newcastle friends that Home-rule may safely be granted to Ireland, on the ground that " no people once fairly invested with legal power has shown any disposition to abuse it, or indulge in acts of vindictive vengeance." Well, all we can say is that no people who ever gained so much, and indeed so disproportionate a share of influence in the nation to which they belong, as the Irish, ever showed so little sign as they do of the smallest disposition to abate the manifestations of vindictive vengeance. If, when they have got their Church Bills, and Land Bills, and Arrears' Bills passed from the mere sense of justice, the dynamiters multiply, and sympathy with the dynamiters shows itself more and more ; and if none the less we are to assume, as Mr. Cowen wishes us to assume, that Home-rule once granted, the Irish would make no further attempt to embarrass the policy of the United Kingdom, and to break-up its organisation, we shall certainly be the people with the least power of reasoning by induction who ever lived. The more we have done for Ireland from a sense of justice, the more furious apparently have the Irish-Americans become, and the more inexorably hostile the Irish themselves. Nevertheless if we only give them one step more, the power of controlling their own finances, of raising their own soldiery and their own police, we are bid to believe that they will at once subside into the same happy state of loyalty as Victoria or the Canadian Dominion. Let Mr. Cowen believe it if he will ; no sensible statesman should believe it. We are bound to give the Irish all the liberty we claim for our selves, but no more. We do not claim for England taken alone the power of doing what we will with the English troops and the English taxes, and still less for Wales or Cornwall or Scotland any similar right ; and if we granted such a right to any section of the country to-morrow, we should expect dis union to follow close upon it. We can only expect the same in Ireland with far greater certainty. If we wish to have civil war forever threatening us, we may grant Ireland Home-rule. But for our own parts, we would far rather grant complete separation. With complete separation, the resources of science would, we suspect, be quite equal to securing at least our own safety, though we should have done a very great injustice to the loyal section of the Irish people. Bat with Home-rule nothing would be safe. We should have moral explosives with the fuzes ready lighted always awaiting us ; and this would be the result of Mr. Cowen's statesmanship. No, Mr. Cowen is a considerable orator, but a most dangerous statesman. He can give excellent advice to the people for the guidance of their own moral aspirations ; but when he comes to practical

statesmanship, he follows the lead of a fertile fancy and a most sanguine and uxpractical judgment. Admiration of his eloquence and distrust of his counsels are the predominant feelings with which we have perused and reperused his speech.