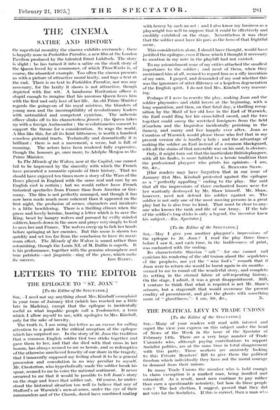 OE superficial morality the cinema exhibits overmuch : there is happily none in Forbidden Paradise, a new film at the London

Pavilion produced by the talented Ernst Lubitsch. The story is slight : he has turned it into a satire on the stock story of the Queen loved by a commoner, of which Three Weeks is, of course, the absurdest example. Too often the cinema presents us with a picture of attractive moral laxity, and tags a text at the end. There is no text to Forbidden Paradise, nor was any necessary, for the laxity it shows is not attractive, though

depicted with fine wit. A handsome Ruritanian officer is stupid enough to imagine that his amorous Queen loves him with the first and only love of her life. An old Prime Minister regards the goings-on of his royal mistress, the blunders of young men and the incorruptibility of revolutionary leaders with untroubled and competent cynicism. The unheroic officer slinks off to his characterless fiancée ; the Queen takes up with a foreign Ambassador ; the revolutionaries consent to support the throne for a consideration. So wags the world. A film like this, for all its faint bitterness, is worth a hundred senseless pictorial tracts. Technically and dramatically it is brilliant : there is not a movement, a scene, but is full of meaning. The actors have been rendered fully expressive, though the honours go, once more, to Adolphe Menjou as the Prime Minister.

In The Miracle of the Wolves, now at the Capitol, one cannot fail to be impressed by the sincerity with which the French have presented a romantic episode of their history. That we should have enjoyed ten times more a story of the Wars of the Roses played in England with the same zeal and care by an English cast is certain ; but we would rather have French historical spectacles from France than from America or Ger- many. The film is not perfectly managed, and though it has now been made much more coherent than it appeared on the 'first night, the profusion of scenes, characters and incidents is a little bewildering. There is a thrilling climax when the grave and lovely heroine, bearing a letter which is to save the King, beset by hungry wolves and pursued by evilly minded soldiers, kneels down in the snow and prays very simply to God to save her and France. The wolves creep up to lick her hands before springing at her enemies. But this scene is shown too quickly and set too far from the conclusion to have its maxi- mum effect. The Miracle of the Wolves is sound rather than astonishing, though the Louis XL of M. Dullin is superb. It is his performance, together with the genuine atmosphere and