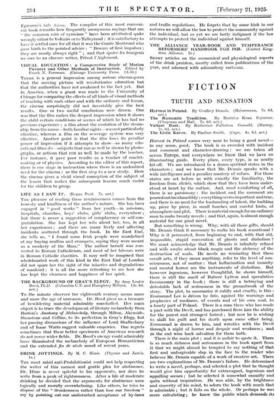 VISUAL EDUCATION : a Comparative Study of Motion Pictures and

Other Methods of Instruction. Edited by Frank N. Freeman. (Chicago University Press. t3.50.) THERE is a general impression among serious cinema-goers that the moving picture will revolutionize education but

that the authorities have not awakened to the fact yet. But in America, when a grant was made to the University of Chicago for comparing the effects of all kinds of visual methods of teaching with each other and with the ordinary oral lesson, the cinema surprisingly did not invariably give the best results. One or two useful conclusions were drawn. One was that the film makes the deepest impression when it shows the child certain conditions or scenes of which he has had no previous experience ; a film about the evolution of the steam-

ship from the canoe—both familiar sights—was not particularly effective, whereas a film on the sewerage system was very effective. Another point is that the film loses its peculiar power of impression if it attempts to show—as many edu- cational films do—subjects that can as well be shown by photo- graphs, or actions that can as well be made by the teacher.

For instance, it gave poor results as a teacher of omelet- making or of physics. According to the editor of this report, there is one stage in instruction where there is an undoubted need for the cinema : as the first step to a new study. Here the cinema gives a vivid visual conception of the subject of the lesson that makes the subsequent lessons much easier for the children to grasp.