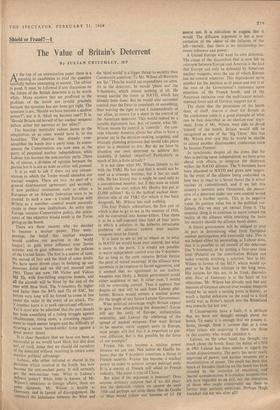 The Value of Britain's Deterrent

Athe top of an examination paper there is a warning to candidates to read the question carefully before attempting to answer. The advice is good. It must be followed if any discussion on the future of the British deterrent is to be worth while. Many answers that are proffered to the problem of the bomb are invalid precisely because the question has not been got right. The question is not, 'Should we have become a nuclear power?', nor is it, 'Shall we become one?' It is, `Should Britain rid herself of her nuclear weapons before either her enemies or her allies?'

The hustings inevitably reduce issues to the simplicities, or as some would have it, to the banalities. The election has already over- simplified the bomb into a party issue. In conse- quence the Conservatives are now seen as the party of perpetual nuclear independence, while Labour bas become the non-nuclear party. There is, of course, a division of opinion between the .Parties but it is not as wide as either will pretend.

It is as well to ask if there are any circum- stances in which the Tories would abandon our nuclear weapon. There are two. As part of a general disarmament agreement; and secondly, if new political institutions such as either a European or an Atlantic federation were to be created. In such a case—a United Europe with Britain as a member—control would naturally reside in these new institutions. As entry into Europe remains Conservative policy, the attain- ment of this objective would result in the Tories giving up the bomb.

There are three reasons why we decided to become a nuclear power. They were: prestige, the belief that nuclear weapons would confirm our position in the 'world league'; to gain some influence over Soviet actions; and to gain influence over the policies of the United States. The first is a matter of taste, the second of fact and the third of some doubt. We have spent eleven years in building up our deterrent force and we did not succeed until 1961. There are now 180 Victor and Vulcan Mk Us, with free-falling megaton bombs, and all the aircraft will be fitted by the end of the Year with Blue Steel. The V-bombers fly higher and faster than the B47s and 52s of SAC, but before very long will be forced to come in low under the radar in the event of an attack. The

Yet force is at peak operational efficiency. Yet it must also be admitted that the past decade has been something of a losing struggle against obsolescence, rising costs, a mounting require- ment to reach enemy targets and the difficulty of securing a secure 'second-strike' force against a great power threat.

It is clear therefore that we have not been as successful as we would have liked, but this does not, of itself, mean that we should rid ourselves of the deterrent without receiving in return some massive political advantage. Labour, who either initiated or shared in the decisions which resulted in the bomb, has now become the anti-nuclear party. It will certainly get the non-nuclear vote. What is Labour's defence policy? While little is known of Mr. Wilson's intentions in foreign affairs, there are some signposts. Mr. Wilson is hostile to Germany, and in favour of disengagement. He considers the imbalance between the West and the 'third world' is a bigger threat to security than Communist ambition. To Mr. Wilson all Russians are 'fat.' Thus he would cut expenditure on arms. As to the deterrent, he would 'phase out' the V-bombers, which means nothing at all. He would ascribe the force to NATO, which has already been done. But he would also surrender control over the force to somebody or something, thus waiving the right to use it independently of our allies, in return for a share in the 'control of the American deterrent.• This would indeed be a notable diplomatic feat. But, of course, what Mr. Wilson means by control is `controle': the con- cept whereby America allows her allies to have a greater say in the decision-making, targeting, and strategic planning processes that would take place prior to a decision to fire. But do we have to abandon our own deterrent to achieve this laudable, if limited, objective? Particularly as much of this is done already?

It is not clear what Mr. Wilson intends to do with the TSR2. He has said that it would not be used as a strategic bomber, but it has no such role. He has hinted that it might be used only as a conventional bomber, but if this were so could he justify the cost, which Mr. Healey has put at £1,000 million? As to the tactical nuclear inter- diction role of the TSR2 (for which it has been designed), Mr. Wilson has said nothing.

The four Polaris submarines, the first one of which is due to go to sea in the summer of 1968, will be converted into hunter-killers. Thus there is to be a self-imposed time limit of four years in which a solution to the hitherto intractable problems of alliance control over nuclear weapons must be found.

It is hard to see as yet to whom or to what in NATO we would hand over control, but what is more to the point, it is simply not possible to waive independent control over the V-bombers for as long as the crew remains British (hence the point of mixed manning). If the alliance were uncertain in its response to Soviet aggression, and it seemed that no agreement to use nuclear weapons was likely, a British government could either acquiesce or not. It either case, it would still be exercising, control. Thus it appears that despite al! that will be said from Labour plat- forms, Britain would remain a nuclear power for the length of any future Labour Government.

What political advantage might Britain expect to gain from abandoning the deterrent? Tories will say the unity of Europe; unilateralists neutrality; and Labour the inhibiting of the spread of nuclear weapons. Few want Britain to be neutral, more support unity in Europe, most people will feel that it is important to pre- vent diffusion. But is this possible by the force of our example?

But what if the argument is reversed? Does anyone seriously suppose that if we did aban- don the deterrent (which we cannot do until 1968 and perhaps not even then), that de Gaulle or Mao would follow suit because of it? Of course not. It is ridiculous to suggest that it would. The diffusion argument is but a rein- carnation of the oldest of the fallacies of the left—namely, that there is no relationship be- tween influence and power.

A United Europe will want its own deterrent. The cause of the discomfort that is now felt in relations between Europe and America is the fact that Europe can only be defended by American nuclear weapons, over the use of which, Europe has no control whatever. This dependence upon another for the decision as to peace and war is at the root of the Government's insistence upon retention, of the French bomb, and of the American initiative over the multilateral mixed- manned force and of German support for it.

The claim that the possession of the bomb does, of itself, reserve a chair for Britain at the conference table is a good example of what can be best described as an election-year argu- ment. Even if Mr. Wilson were able to divest himself of the bomb, Britain would still be recognised as one of the 'Big Three.' Nor has Mr. Wilson ever said that he would be unable to attend another disarmament conference once he became Premier.

In conclusion, despite all the stress that Sir Alec is putting upon independence, we have gone ahead with efforts to integrate the deterrent within the NATO alliance. The V-bombers have been allocated to NATO and given new targets. In the event of the alliance being undecided on how best to react to a Soviet threat (be it either nuclear or conventional), and if we felt this country's interests were threatened, the posses- sion of a deterrent under our own control would give us a further option. This is its negative value. Its positive value lies in the political use- fulness that we may yet extract from it. The essential thing is to continue to move toward the reality of the alliance while retaining the basis for security should the alliance break down.

A future government will be obliged to play its part in determining what form European nuclear participation will eventually take. This is not helped either by pretending, as Labour does, that it is possible to rid oneself of the deterrent (the V-bombers), or by putting a four-year time limit (Polaris) on the contribution Britain can make towards reaching a solution. Nor is Mr. Wilson in favour of the MLF, which would ap- pear ,to be the best solution in the long term. His reasons for this are, to be frank, discredit- able. Fear of Germany is at the 'heart of his objections. Mr. Wilson has already said that any measure of German control over nuclear weapons would be 'as much a turning point in history, as much a fateful milestone on the road to a third world war, as Hitler's march into the Rhineland was towards the last war.'

If Conservatives have a fault, it is perhaps that we have not thought enough about the bomb. To many it is enough that we possess it. Some, though, think it curious that at a time when others are acquiring it there are those in this country who would abandon it.

Labour, on the other hand, has thought tdo much about the bomb. Since the defeat of CND in 1961 Labour has been unable to regard the bomb dispassionately. The party has never really approved of power, and nuclear weapons are a manifestation of power. The result has been that much of Socialist thinking on the bomb has been clouded by the inclusion of emotional and 'moral' considerations. It is nuclear weapons that are now regarded as an evil, not the intentions of those who might conceivably use them to further their political ambitions. Perhaps Hugh Gaitskell did not win after all?