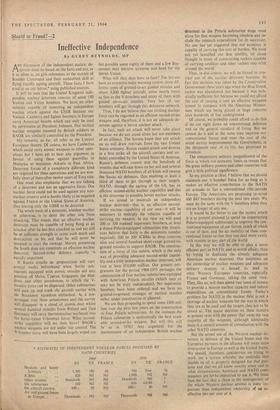 ANY discussion of the 'independent nuclear de- in terrent must be based on the facts and not, as it so often is, on glib references to the morale of Bomber Command and their undoubted_ skill at flying rapidly ageing aircraft. These facts I have tried to set out below,* using published sources.

It will be seen that the United Kingdom inde- pendent nuclear deterrent consists of some 180 Vulcan and Victor bombers. We have no other vehicles capable of mounting an independent nuclear attack against the USSR because our Valiant, Canberra and fighter bombers in Europe carry American bombs which can only be used by permission of President Johnson. Our tactical nuclear weapons manned by British soldiers in BAOR are siinilarly controlled by the President.

My remarks. so far, all refer to the Central European theatre. Of course, we have Canberras which could carry atomic weapons in other oper- ations but I have yet to hear any argument in favour of using them against guerrillas in Malaysia or mutinous Askaris in East Africa. Deterrent forces of a completely different kind are required for these operations and we are woe- fully short of them after twelve years of Tory rule.

One must also emphasise that we are talking of a deterrent and not an aggressive force. Our nuclear force could not be used against any non- nuclear country and is hardly likely to be required against France or the United States of America, thus leaving, only the USSR to be deterred.

The whole basis of a deterrent, whether nuclear or otherwise, is to deter the other side from attacking. This means that an effective nuclear deterrent must be capable of being flung at an attacker after he has first attacked us and yet still be of sufficient strength to cause such death and destruction on his soil that he will never be tempted to start the carnage. Merely possessing the bomb does not constitute an effective nuclear deterrent. Second-strike delivery capacity is equally important.

If Russia attacks us preparations will start several weeks beforehand when Soviet sub- marines equipped with atomic missiles sail into position off Malta, Cyprus, Singapore, the Mal- dives and other aerodromes to which the V- bomber force can be dispersed. Other submarines will pick up and track the aircraft carrier with the Buccaneer squadron embarked. At a pre- arranged time these aerodromes and the carrier Will disappear in a cloud of atomic dust whilst several hundred missiles from Poland and East Germany will carry thermonuclear warheads into the home-based V-bomber force. What second- strike capability will we then have? BAOR's nuclear weapons are not under our control. The V-bomber force will have been largely wiped out

but possibly some eighty of them and a few Buc- caneers may become airborne and head for the Soviet Union.

What will they then have to face? The Soviets have an extensive radar warning system, three dif- ferent types of ground-to-air guided missiles and about 8,000 fighter aircraft, some nearly twice as fast as the V-bombers and many of them with guided air-to-air missiles. Very few of our bombers will get through this defensive network.

Thus, I do not believe that our existing nuclear force can be regarded as an efficient second-strike weapon and, therefore, it is not an adequate de- terrent against a Soviet nuclear attack. • In fact, such an attack will never take place because we do not stand alone but are members of an alliance. The Soviets know that any attack on us will draw reprisals from the vast United States armoury. Russia cannot attack and destroy in a first strike all the aircraft carriers and air- fields controlled by the United States of America. Russia's defences cannot stop the hundreds of missiles that will rain down on her soil and several thousand NATO bombers of all kinds will swamp the Soviet air defences, thus enabling at least a third of them to get through to their targets. NATO, through the agency of the US, has an efficient second-strike nuclear capability and this is the deterrent to possible Soviet nuclear attacks.

If we intend to maintain an independent nuclear deterrent—that is, an effective second- strike nuclear capability of our own—it will be necessary to, multiply the vehicles capable of carrying the weapon. In my view we will need 200 or 300 manned supersonic bombers, at least a dozen Polaris-equipped submarines (the Ameri- cans believe that forty is the minimum number required), ,200 to 300 ICBMs in deep concrete silos and several hundred short-range ground-to- ground missiles to support BAOR. The construc- tion of a force of this nature, which is the only way of providing adequate second-strike capabi- lity and a truly independent nuclear deterrent, will cost at least £10.000 million. Our present pro- gramme for the period 1968-1975 envisages the construction of four nuclear submarines equipped with American Polaris missiles (which may or may not be truly independent). No supersonic bombers have been ordered and we have no ground-to-ground strategic or tactical missiles either under construction or planned.

We are thus proposing to spend some £400 mil- lion over the next few years on the construction of four Polaris 'submarines. At the moment the Polaris submarine is undoubtedly the best avail- able second-strike weapon. But will this still be so in 1970? Any argument for the maintenance of an independent British nuclear

deterrent to the Polaris submarine stage must allow for that weapon becoming obsolete and in- clude the research expenditure for its successor. No one has yet suggested that our economy is capable of carrying this sort of burden. We have not yet launched our first satellite, let alone thought in terms of constructing rockets capable of carrying satellites and other rockets into orbit around the world: Thus, in due course, we will be forced to con- tract out of the nuclear deterrent business. In fact this decision was taken by the Conservative Government three years ago when the Blue Streak rocket was abandoned. not because it was tech- nically inefficient but because we could not afford the cost of turning it into an effective weapons system to compare with the American Minute- men which are being placed in huge concrete silos hundreds of feet underground

Of course, we probably could afford to do this if we cut right down on conventional defences and on the general standard of living. But we cannot do it and at the same time improve our conventional forces and meet the cost of the social service improvements the Government, in the thirteenth year of its life, has promised to introduce.

The comparative military insignificance of the force to which our economy limits us means that the great military powers and other countries will give it little political significance.

So my position is clear. I believe that we should maintain our V-bomber force for as long as it makes an effective contribution to the NATO air armada or has a conventional role outside Europe. The Americans are proposing to scrap 600 B47 bombers during the next two years. We must do the same with the V-bombers when they are no longer of any use.

It would be far better to use the money which it is at present planned to spend on constructing Polaris-equipped submarines to improve the con- ventional equipment of our forces, much of which is out of date, and the air mobility of these con- ventional forces so that they can deal more easily with trouble in any part of the world.

In this way we will be able to play a more efficient part in NATO, and in world affairs, than by trying to duplicate the already adequate American nuclear deterrent. Our insistence on the ownership of nuclear weapons and adequate delivery systems is bound to lead to other Western European countries, especially France and Germany, taking the same view. They, like us, will then spend vast sums of money to provide a minute nuclear capacity and reduce expenditure on conventional forces. Today's problem for NATO in the nuclear field is not a shortage of nuclear weapons but the way in which they are to be used and the targets they are to be aimed at. The major decision on these matters at present rests with the power that owns the vast majority of the weapons, although admittedly there is a certain amount of consultation with the other NATO countries.

But the actual use of the Western nuclear de- terrent in defence of the United States and the European partners in the alliance will mean mass destruction in Europe as well as the United States. We should, therefore, concentrate on trying to work out a system whereby the umbrella that shields us all is properly designed for that pur- pose and that we all know exactly when and in what circumstances American and NATO com- manders are tothe instructed to use it. We must face the fact that a share in the management of the whole Western nuclear arsenal is more im- portant than independent ownership of au in- effective two per cent of it.