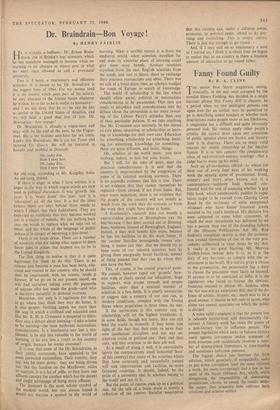 His already a buffoon: Dr. Ernest Brain- drain, one of Britain's lop' scientists, which he has somehow managed to become while re- maining in an obscure or minor post in what we were once allowed to call a provincial university.

This is, I hope, a reactionary and offensive sentence. It is meant to be. Dr. Braindrain is the biggeSt bore of 1964. For my money (and it is my money which pays part of his salary), he may abscond to the United States whenever he 'wishes. In so far as he is useful to humanity— and I do not deny that he is—he can be just as useful in the United States of America, and we will hear a good deal less of him. Dr. Bra nd rain—bon voyage!

Dr Braindrain is already a vogue-man and may well, by the end of the year, be the Vogue- man. He is the likeliest anti-hero for ten years. Lucky Jim Braindrain. He is cut for Town and tailored • for Queen. He will be featured in Insight, and profiled in Daylight.

If there is anger in what I have written, it is anger at the way in which vogue-words are now used in political discussion. It was 'growth last year; it is 'brain drain' this year; and it is 'education' all, all the time. It is not the ideas (where there are any) behind these words to which I object, but their faddishness. They are exploited so ruthlessly that they become worked out in a matter of months. We put nothing back into the words to replace what we take out of them; and the whole of the language of public debate is in danger of becoming a dust-bowl.

There is no brain drain. There are a number of scientists who are taking what appear to them better jobs in places that happen not to he in the United Kingdom.

The first thing to realise is that it is quite legitimate for them to do this. There is no reason, just because a man has been born, edu- cated and trained in this country, why he should' then be imprisoned, with his talents, inside it forever. If we go on in our present mood, we will find ourselves taking away the passports of anyone who has made the grade—and who is therefore naturally in demand overseas.

Moreover, not only is it legitimate for them to go where they think they may do better, it is also proper. Nothing appals me more than the way in which a civilised and educated man like Mr. R. H. S. Crossman is prepared to intro- duce into a debate about learning—I take science to be learning—the most irrelevant nationalistic considerations. Is a biochemist any less a bio- chemist, is he any less valuable to the world of learning, is he any less a credit to his country of origin, because he works overseas?

It is true that some of the Dr. Braindrains, in their public statements, have appealed to the same perverted nationalism. Their country, they say, has let them' down; they are being driven out, like the families on the Mayflower, exiles or martyrs. It is a lot of piffle, as they leave one affluent country for another which has the decent and single advantage of being more affluent.

The passport is the most odious symbol of the modern world; but one always hoped it would not become a symbol in the world of

learning. What a terrible retreat it is from the mediteval world, when scientists travelled far and wide to whatever place of learning could give them most benefit. Arabian scientists travelled from the east, English scientists from the north, and met in Spain, there to exchange their precious manuscripts and ideas. There was no talk of a brain drain then, as•scholars trudged the roads of Europe in search of knowledge.

Oh. scholars of the world unite: you have nothing, indeed, to lose but your brains.

A biochemist's research does not benefit a cancer-ridden patient in Birmingham any the less because it has been carried out in Birming- ham, Alabama. instead of Birmingham, England. Indeed, it may well benefit him more, because he has the facilities to do his work better. If the current Socialist propaganda means any- thing, it means just this: that we should try to keep some of our talented scientists here by giving them marginally better facilities, instead of being pleased that they can go where they can have the best.

This, of course, is the crucial practical point. We cannot, however rapid our 'growth, how- ever wide or thinly spread our 'education,' hope to support, with proper rewards and proper facilities, more than a minimal number of scientists in a few fields. It is utterly unscientific to suggest that a country of our size can, in modern conditions, compete with the United States whose population is three times the size.

If the universities in this country can, in scholarship, still set the highest standards; if, in some fields, though not many, they can still lead the world in research; if they never lose sight of the fact that they exist to serve their own intellectual discipline, and not any ex- traneous social or political one: then, and then only, will they continue to do their job well.

As a result of doing it well, it is unavoidable (given the comparatively small industrial 'base' of this country) that many of the scientists whom they have virtuously and successfully trained will seek opportunities and facilities in more favoured countries. It should, indeed, be the pride of a university that its scholars belong to the world and not to it.

But the point, of course, ends up as a political one. All the talk of a brain drain is merely a reflection of the current Socialist assumption that this country can, under a different social, economic, or political order, afford to do any- thing and everything. This is simply untrue. There is just not enough to go round. -

And, if I may end on as reactionary a note as I started on, I think it is about time we began to realise that in no country is there a limitless amount of education to go round either.