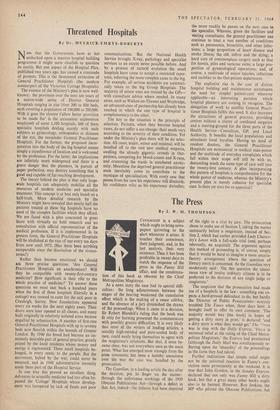 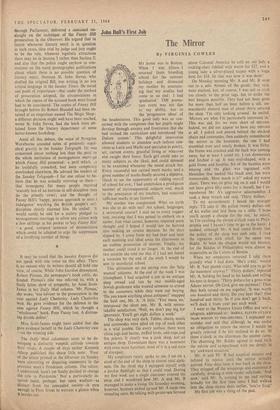 As a news story the case had its special diffi- culties: the long adjournments between the stages of the hearing weakened the cumulative effect which is the making of a cause célebre, and the absence of a jury diminished the drama of the proceedings. When it came to a decision, Sir Robert Blundell's ruling that the book was fit only for burning presented the commentators with possibly greater difficulties. It is very likely that most of the writers of leading articles, a notably high-minded and pure-souled body of men, could easily bring themselves to agree with the magistrate's strictures. But that, it soon be- came clear, was not everywhere seen as the main point. What has emerged most strongly from the press comments has been a healthy uneasiness over the way the case was handled .by the prosecution.

The Guardian, in a leading article the day after the decision, put its finger on the matter: through the unforeseen workings of the 1959 Obscene Publications Act—through a defect in that Act, indeed—the defence had been deprived

of the right to a trial by jury. The prosecution chose to make use of Section 3, taking the matter summarily before a magistrate, instead of Sec- tion 2, which had earlier provided Lady Chatter- ley's Lover with a full-scale trial (and, perhaps relevantly, an acquittal). The argument against this method of proceeding is, of course, simply that it would be hard to imagine a more unsatis- factory arrangement where the question of literary merit is concerned. As the Guardian very moderately said : 'On this question the unani- mous view of twelve ordinary citizens is to be preferred to the decision of any single judge or magistrate.'

The suspicion that the prosecution had made use of a loophole in the law—something one ex- pects a hard-pressed defendant to do, but hardly the Director of Public Prosecutions—scarcely troubled The Times when, three days later, it brought itself to offer its own comment. The majority would buy [the book] in hopes of getting a dirty story in print,' it declared, 'and a dirty story is what they would get.' The ivies was in step with the Daily Express. 'There is universal relief at the ruling of the Chief Metro- politan Magistrate,' the Express had proclaimed (although the Daily Mail was simultaneously re- flecting upon the 'absurdity' of the proceedings in the form they had taken).

Further indications that simple relief might not be the universal reaction to Fanny's con- viction came prominently at the weekend. It is true that John Gordon, in the Sunday Express, declared that not only was Fanny Hill a dirty book, but that a great many other books ought also to be banned. However, Roy Jenkins, the MP who piloted the Obscene Publications Act through Parliament, delivered a sustained on- slaught on the technique of the Fanny Hill prosecution in the Observer. He argued that in future whenever literary merit is in question in such cases, then trial by judge and jury ought to be the rule, whatever legalistic attractions there may be in Section 3 rather than Section 2; and also that the police ought anyhow to con- centrate on the many pornographic publications about which there is no possible question of literary merit. Norman St. John Stevas, who drafted the original Bill, was writing in no less critical language in the Sunday Times. He noted one point of importance—that under the method of prosecution adopted, the circumstances in which the copies of the accused book were found had to be considered. The copies of Fanny Hill brought before Sir Robert Blundell had been ob- tained at an emporium named The Magic Shop: a different decision might well have been reached, wrote St.- John Stevas, had the book been ob- tained from the literary department of some better-known bookshop.

Amid all this debate, the voice of Peregrine Worsthorne sounded notes of positively sepul- chral gravity in the Sunday Telegraph. He was concerned about nothing less than the peril to the whole institution of monogamous marri lee which Fanny Hill presented: a peril which. .s he truthfully remarked, had been completely overlooked elsewhere. He advised the readers of the Sunday Telegraph—I for one refuse to be- lieve that he was actually referring to them— that monogamy for many people required 'scarcely less of an exercise in self-discipline than do the priestly vows'; and the thought of Fanny Hill's 'happy, joyous approach to sexu indulgence' wrecking the British people's self- discipline clearly alarmed him. He ended: 'It would surely be odd for a society pledged to monogamous marriage to allow any citizen with a .few shillings in his pocket to'buy Fanny Hill' —a good, compact sentence of denunciation which could be adapted to urge the suppression of a terrifying number of things.

It may be noted that the .sunday Express did not speak with one voice on this affair. There is no reason why its writers should all hold one view, of course. While John Gordon denounced, Robert Pitman, the newspaper's book critic, de- fended. Pitman's role was referred to, with a finely feline show of sympathy, by Anne Scott- James in her Daily Mail column. `Mr. Pitman,' she wrote, `was adviser to the prosecution in the case against Lady Chatterley. Lady Chatterley won. He gave evidence for the defence in the case against Fanny Hill, which he thought a "wholesome" book. Poor Fanny lost. A distress- ing double defeat.'

Miss Scott-James might have added that she gave evidence herself in the Lady Chatterley case —on the winning side.

The Daily Mail columnists seem to be de- veloping a distinctly waspish attitude towards their rivals. A couple of days earlier Kenneth Allsop published this sharp little note: `Four of the- letters printed in the Observer on Sunday were correcting or disputing statements in the previous week's Pendennis column. The editor, I understand, hasn't yet finally decided to change the title to Pandennis.' Not a particularly in- spired taunt, perhaps; but open warfare—as distinct from the concealed variety—is rare enough in Fleet Street to warrant a glance when it breaks out.