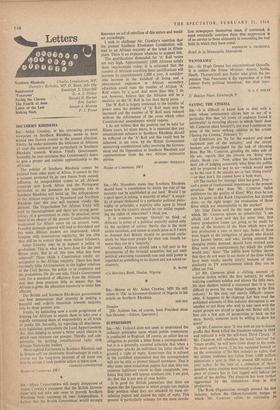 SIR,– Many Conservatives will deeply disapprove of Aidan Crawley's statement

I wish to challenge Mr. Crawley's assertion that the present Southern Rhodesian Constitution will lead to an African majority at the latest in fifteen years. There is no evidence whatever to support this.

The qualifications demanded for 'A' Roll voters are very high. Approximately 3,000 Africans satisfy these requirements today. It is estimated that the number of Africans acquiring these qualifications will increase by approximately 1,000 a year. A consider- able increase in the standard of living and a phenomenal expansion in African secondary education could raise the number of African 'A' Roll voters by a good deal more than this. I do not, however, believe that the Africans will be a majority on the 'A' Roll in less than thirty years.

The 'B' Roll is largely irrelevant to the transfer of power since the number of 'A' Roll seats may be increased and the number of 'W Roll seats reduced without the referendum of the races which other Constitutional amendments would require.

I do not believe that the position can be held for fifteen years, let alone thirty. It is essential that any constitutional advance in Southern Rhodesia should be reflected on the 'A' Roll and this could best be achieved, in my view, by the British Government sponsoring constitutional talks involving the Govern- ment and the Opposition in Southern Rhodesia and representatives from the two African nationalist parties, House of Commons, SWI