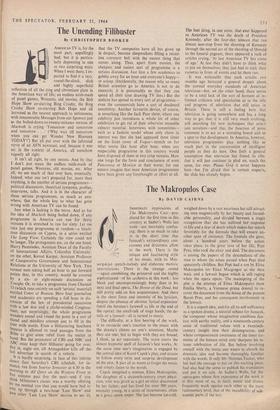 It was noticeable that such articles two months ago betrayed a general despair about. the normal everyday standards of American television—but, on the other hand, there seems to be a total lack of the sort of ferment of in- formed criticism and speculation as to the role and progress of television that still exists in Britain. There is still a feeling here that television is going somewhere and has a long way to go; that it is still very much evolving, still searching for new techniques that aren't just novelties—and that the function of press comment is to act as a sounding board and as a spur to that development. In America, however, television programmes play nothing like as much part in the conversation of intelligent people as they .do here. One feels a general assumption that television has found its role, that it will just continue to plod on, much the same, for ever. Please God it never happens here—but I'm afraid that in certain respects, the slide has already begun.