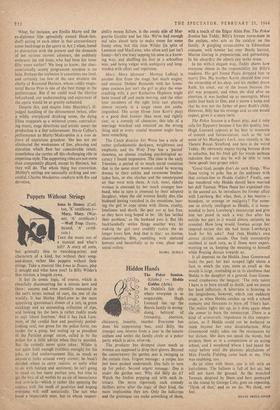 0'0 (Globe.) — Hedda IN Dublin's fair city 0 where everyone is so C), respectable, Hugh Leonard ties up the Beavis family in wrong- doing, betrayal of

friendship, abortion, chicanery, insanity, murder. Everyone has done his suppressing best, until Billy, the younger son, returns from a year in the lunatic asylum and unites the family circle at a poker party which is alive, alive-oh.

The producer has dropped clues much as women are supposed to drop their gloves. Beyond the conservatory the garden seat is swinging as the curtain rises. Urgent message: a corpse has just been pushed underneath. Des fails to turn up for poker. Second urgent message: Des is under the garden seat. Why did Billy do it? Watch the birdies popping out with such in- tricacy. The more rigorously such comedy thrillers strive after the logic of their kind, the more implausible they are. Only the ludicrous and the grotesque can make something of them,

with a touch of the Edgar Allen Poe. The Poker Session has Teddy, Billy's former room-mate in the asylum, who acts as the catalyst on the family. A gangling circus-clown in Edwardian costume, with bowler hat over Beatle haircut, Marius Goring is preposterous and galvanising. In his absurdity the others can make sense.

In his with-it elegant way, Teddy shows how everyone shares in the responsibility for Billy's madness. His girl friend Paula dropped him to marry Des. His brother Kevin cheated him over the ownership of his shop, and his mother drove Ruth, his sister, out of the house because the girl was pregnant, and when she died after an abortion, it was hushed up as meningitis. Many paths lead back to Des, and it seems a loose end that he was not the father of poor Ruth's child. However, Billy has his revenge and, as one would expect, gives it a nasty twist.

The Poker Session is a fluent play, and it only calls for flippancy because it has this quality, too. Hugh Leonard appears at his best in moments of conceit and fantastication. such as the last scene of his Madtgan's Lock, seen recently at the Theatre Royal, Stratford, and here in the weird Teddy. He obviously enjoys laying banana skins in suburbia, but his Irish gift for words perhaps indicates that one day he will be able to turn these spoofs into proper jokes.

'Good God, people don't do such things.' Was Ibsen trying to poke fun at the audience with that curtain-line to Hedda Gabler? Firstly, one has wondered why Hedda should have married her dull Tesman. When Ibsen has explained this in the second act, he introduces the former affair with Loevborg. But what, then, is her motiye- boredom, or revenge or malignity? For some- one so strictly intelligent as Hedda, it is loose- minded to burn Loevborg's manuscript and give him her pistol in such a way that after his suicide her part in it would almost certainly be revealed. How long would Tesman accept her inspired excuse that she had burnt Loevborg's book for his sake? And then Hedda's own almost skittish suicide. One feels consistently snubbed at each turn, as if Ibsen were experi- menting on us, keeping the meaning to himself while floating decoys towards us.

It all depends on the Hedda. Joan Greenwood looks the part, her hair scraped tight above a face in which the eyes seem as small as the mouth is large, reminding us in its aloofness that Hedda is the daughter of a general. Joan Green- wood emphasises the languor. The only talent I have is to bore myself to death,' and we notice her hard inflection. A bitterness is festering in the languidness, however, which can suddenly erupt, as when Hedda catches up with a school memory and threatens to burn of Thea's hair. The malice lights her up, as it does again when she comes to burn the manuscript. There is a kind of aristocratic impudence in this interpre- tation, as if Hedda could not be bothered to think beyond her own dissatisfaction. Miss Greenwood oddly takes out the resonances by her diction. She does not speak the words, but projects them as in a competition at an acting school, and I wondered where I had heard the voice before until the plummy playfulness of Miss Fenella Fielding came back to me. This was snubbing, too.

As so often with Ibsen, one is left with an anti-climax. The balloon is full- of hot air, but will not leave the ground. As the wretched Tesman, despised by Ibsen and here portrayed in the round by George Cole, goes on repeating, 'Think of that,' and so we do. We think, not feel.