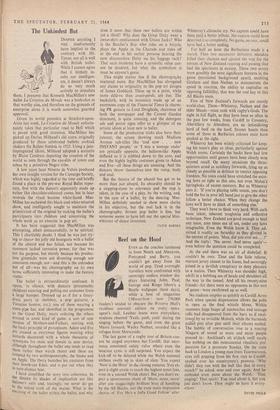 Beef on the Hoof

EVEN as the coaches lumbered in from Neath and Aberavon, Pontypool and Barry, you couldn't get away from the world of pop. Tired overnight travellers were confronted with seemingly endless window dis- plays featuring John, Paul, George and Ringo (there's a Beatle wallpaper these days), while a host of magazines

('Merseybeat : now 250,000 readers') tended to obscure the Western Mail's excellent souvenir edition on every news- agent's stall. Leather boots were everywhere, students chanted 'Yeah, yeah, yeah' during the singing before the game, and even the great Maori forward, Wacka Nathan, sounded like a refugee from Merseyside.

The last game of a rugby tour of Britain can- not be staged anywhere but Cardiff, that enor- mous emotional safety valve where even the weariest cynic is still surprised. You expect the kick-off to be delayed while the Welsh national anthem swells up to skies of slate. You expect 'Now is the Hour' in the closing minutes. You ex- pect a slight strain to reach the highest notes (yes, even in a massed Welsh choir). But you don't ex- pect a spontaneous chant of 'More, more, more' after one staggeringly ,brilliant bout of handling by the All Blacks, nor the even more impressive chorus of 'For He's a Jolly Good Fellow' after Whineray's climactic try. No captain could have been paid a better tribute. No captain could have deserved it so completely. No game, no tour, could have had a better ending.

For half an hour the Barbarians made it a match. Then two successive defensive mistakes killed their chances and opened the way for the torrent of New Zealand running and passing that had the spectators in ecstasy. Those two errors were possibly the most significant features in the game (emotional background apart), enabling Graham and then Nathan to demonstrate the

speed in reaction, the ability to capitalise on opposing fallibility, that was the real key to this All Blacks team.

Five of New Zealand's forwards are merely world-class. Three—Whineray, Nathan and the elder Meads—must rank with rugby's Gods. The eight in full flight, as they have been so often in the past few weeks, from Cardiff to Coventry, Abertillery to Aberdeen, are an intimidating herd of beef on the hoof. Stouter hearts than some of those in Barbarian colours must have quaked at the sight.

Whineray has been widely criticised for keep- ing his team's play so close, particularly against Welsh teams. Certainly the backs have had few opportunities until games have been clearly won beyond recall. On many occasions the three- quarters acted as auxiliary forwards, lying up as closely as possible in defence to restrict opposing freedom. No team could have stretched the exist- ing laws as tight as this one, not even Malan's Springboks of recent memory. But as Whineray puts it: 'If you're playing table tennis, you don't hold the bat in your left hand just to give the other fellow a better chance. When they change the laws we'll have to think of something else.'

They won't have to think very hard. With such basic talent, inherent toughness and collective technique, New Zealand are good enough to beat any team, nine times out of ten, under any laws imaginable. Even the Welsh know it. They ad- mitted it readily on Saturday as they gloried in the torrent of points. 'Man, did you ever see ...?' And the reply: 'No, never. And never again'— even before the question could be completed.

At the end there was an air of disbelief. It couldn't be over. Time and the little referee, maroon jersey almost to his knees, had seemingly joined in a devilish conspiracy to deny pleasure to a nation. Then Whineray was shoulder high, adrift in a bobbing sea of heads and shoulders all the way to the tunnel. And all his twenty-nine friends—for there were no opponents in this sort of game—were swallowed up as well.

No stadium empties as quickly as Cardiff Arms Park when special dispensation allows the pubs to open as the final whistle blows. Within moments huge heaps of sandwiches and sausage rolls had disappeared from the bars, as if swal- lowed by an invisible Moloch, while the barmaids pulled pint after pint until their elbows melted. The babble of conversation rose to a roaring Niagara of sound as more and more people pressed in : Auckland's six o'clock swill surely has nothing on this monumental ritualistic pre- paration for a prostrate Sunday. On the train back to London a young man from Taurmarunui, eyes still popping from his first visit to Cardiff, exulted over his countrymen's prowess. 'Why didn't they run with the ball like that in every, match?' he asked, over and over again. And he enthuged even more about the Welsh: 'That singing! That spirit! You read about it, but you just don't know. They ought to have it every- where.'