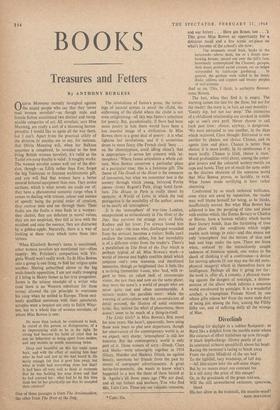 0 LIVIA MANNING recently inveighed against the stupid people who say that they 'never read women novelists'—as though male and female fiction constituted two distinct and recog- nisable categories of art. All novelists, says Miss Manning, are really a sort of a blooming herma- phrodite. I would like to agree all the way there, but I can't. Apart from the practical utility of the division (it enables me to say, for instance, that Olivia Manning will, when her Balkans sequence is completed, be revealed as the best living British woman novelist), it's valid as the Taoist yin-yang duality is valid: it roughly works. The woman novelist comes well out of the divi- sion, though—as Lilith rather than Eve; forget the big Tolstoyan or Joycean architectonic gift, and you will find that women have a better natural fictional equipment than men. They notice surfaces, which is what novels are made out of; they have a phenomenal semantic range when it comes to dealing with texture, colour and nuance of speech; being the primal order of creation, they enclose men and see through them. Their faults are the faults a man finds in a woman: they chatter, they are deficient in moral values, they are too empirical, they fall in love with the accident and miss the essence, they are distracted by a golden apple. Naturally, there is a way of looking at these vices which turns them into virtues.

When Elizabeth Bowen's name is mentioned, other women novelists are mentioned too—often ineptly: Mr. Pritchett's comparison with Vir- ginia Woolf won't really work. To fit Miss Bowen into a group is one thing, to find her origins quite another. Having subscribed above to the big male-female opposition, I am not really reneging if I bring in Henry James as her true progenitor. James is the unique example of a writer who (and there is no Western substitute for these terms) allowed the yin principle to overcome his yang when he settled in Europe. Those end- lessly qualified sentences with their spinsterish scruples were a bequest not only to Edith Whar- ton, but to a whole line of woman novelists, of whom Miss Bowen is one:

He more than looked, he continued to look, he stared at this person, so disingenuous, of a so impassioning wish to be in the right- So strong had become his habit of mind that he saw no behaviour as being apart from motive, and any motive as worth examining twice.

Deep and beautiful on this her smile came back, and with the effect of making him hear what he had said just as she had heard it. He easily enough felt that it gave him away, but what in truth had everything done but that? It had been all very well to think at moments that he was holding her nose down and that he had coerced her: what had he by this time done but let her practically see that he accepted their relation?

One of these passages is from The Ambassadors, the other from The Heat of the Day. The involutions of James's prose, the tortur- ings of natural syntax to avoid the cliché, the enthroning of the cliché where the cliché is not even enlightening—all this was James's substitute for poetry. But, paradoxically, if there had been more poetry in him there would have been a less massive image of a civilisation. In Miss Bowen there is a great deal of poetry: it is what lightens her involutions, and if it sometimes drops to mere fancy (the French clock 'busy . on the chimneypiece, amid idling china'), that is appropriate—it serves her concern with 'at- mosphere.' Where James articulates a whole cul- ture, Miss Bowen conserves a particular place at a particular time; this is a feminine gift. The theme of The Death of the Heart is the massacre of innocence, but what we remember best is the scenery through which young, betrayed Portia passes—frosty Regent's Park, dingy hotel furni- ture. The House in Paris is really about its eponym; A World of Love, in which the real protagonist is the sensibility of the author, seems to be nearly all 'atmosphere.'

It is the 'atmosphere' of war-time London, encapsulated so miraculously in The Heat of the Day, that survives the strange story of Stella Rodney and her lover. I've always found him hard to take—the man who, discharged wounded from the services, becomes a traitor; Stella can't swallow the treason either, but her incredulity is of a different order from the reader's. There's a parallelism in The Heat of the Day which is perhaps typical of all Miss Bowen's work—a world of intense and highly credible detail which conjures one's own sensuous and emotional memories, though so heightened that it feels like a re-living (remember Louie, who 'had, with re- gard to time, an infant lack of stereoscopic vision; she saw then and now on the same plane; they were the same'); a world of people who are never quite real and often unmemorable. A miracle makes the parallels meet: while the weaving of atmosphere and the accumulation of detail proceed, the illusion of solid existence holds. But, behind the whirl of phenomena, there doesn't seem to be much of a thing-in-itself.

The Little Girls* is Miss Bowen's first novel for nine years. She hasn't, apparently, been using those nine years to plot new departures, though her observation of the contemporary world is, as we expect, very sharp: 'atmosphere' is still her business. But the contemporary world is only part of it. Three women of sixty—Dinah, Clare and Sheila—were schoolgirls together in 1914 (Dicey, Mumbo and Sheikie). Dinah, an ageless beauty, summons her friends from the past by means of newspaper advertisements. A great burier-for-posterity, she wants to know what's happened to a box the three of them buried at St. Agatha's all those years ago ('We are dead, and all our fathers and mothers. You who find this, Take Care. These arc our valuable treasures, • Cape, 21s.

and our fetters . . . Here are Bones, too ...'). This gives Miss Bowen an opportunity for a delicious recall and a fine scenic set-piece on what's become of the school's site now: . . . The revenants stood back, backs to the balustrade—above them, ten or a dozen nice- looking houses, spaced out over the hill's face, harmlessly contemplated the Channel; garages, their doors painted pastel colours, sat on ledges surrounded by landscape gardening. . . . In general, the gardens were veiled in the thinly dusky yellows and coppers and bronzy purples of mid-autumn. . .

And so on. This, I think, is authentic flavour- some Bowen.

The box, when they find it, is empty. The warning comes too late for the three, but not for the reader; the story is, in fact, an easy morality: 'Gently dip, but not too deep.' The intensities of a childhood relationship are invoked in middle age at one's own peril. Never choose to call back past time: choice, anyway, is dangerous. 'We were entrusted to one another, in the days which mattered, Clare thought. Entrusted to one another by chance, not choice. Chance, and its agents time and place. Chance is better than choice; it is more lordly. In its carelessness it is more lordly. Chance is God, choice is man.' Moral profundities swirl about, among the auber- gine jerseys and the coloured scenery-motifs on cups and bowls. They are of much the same order as the discrete elements of the sensuous world that Miss Bowen proves, so lavishly, to exist. What James made terrifying is here rather charming.

Confronted by so much technical brilliance, even when not awed by reputation, the reader may well blame himself for being, as he thinks, insufficiently moved. But what Miss Bowen has achieved is less the peopling of time and place with entities which, like Emma Bovary or Charlus or Bloom, have a human validity which bursts their literary bonds, than the furnishing of time and place with the conditions which might enable such beings to exist—and this means not only 'atmosphere' but the texture of skin and hair and bags under the eyes. There are times when, seduced by the miraculously caught cadences of feminine speech, one wakes to the shock of thinking it all a contrivance—a device for moving spheres (if one may use the old meta- physical imagery) which in themselves have no intelligence. Perhaps all this is going too far: the book is, after all, a comedy, a pleasant warn- ing against the dangers of nostalgia, a demon- stration of the allure which informs a sensuous world uncoloured by nostalgia. It is a wonderful artefact, a triumphant Female Novel by one whose gifts release her from the more male duty of being just among the Just, among the Filthy filthy too, and of suffering dully all the wrongs of Man.