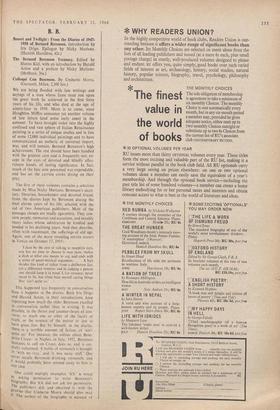 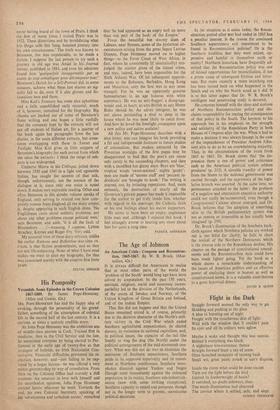 Sunset and Twilight : From the Diaries of 1947- 1958 of Bernard Berenson. Introduction by Iris Origo. Epilogue by Nicky Mariano. .(Hamish Hamilton, 42s.) The Bernard Berenson Treasury. Edited by Hanna Kiel, with an introduction by Harold Acton and a preface by Nicky Mariano. (Methuen, 36s.) Colloqui Con Berenson. By Umberto Morra. (Garzanti, Milan, 2,300 lire.) WE are being flooded with late writings and sayings of a man whose fame must rest upon the great work he achieved in the first forty years of his life, and who died at the age of ninety-four in 1959. More is to come, since Houghton Mifflin announce yet another volume of late letters (and some early ones) in the summer. To have brought order into the highly confused and vast sphere of Italian Renaissance painting in a series of unique studies and in lists of some 12,000 individual paintings and to have communicated an msthetic of universal import, was, and will remain, Bernard Berenson's high achievement. The rest should have been handled with the greatest care and is frequently not, ex- cept in the eyes of devoted and blindly affec- tionate hands, of lasting significance. In fact, much of the fare now presented was expendable, and has set the carrion crows diving on their prey.

The first of these volumes contains a selection made by Miss Nicky Mariano, Berenson's secre- tary, librarian, housekeeper and devoted friend, from the diaries kept by Berenson during the final eleven years of his life, selected with the aid of two American publishers. Most of the - passages chosen are madly egocentric. They con- cern people, memories and occasions, and notably many ladies whose admiration he kindled and needed in his declining years. And they describe, often with resentment, the sufferings of old age. Again, one of the more revealing entries occurs in Venice on October 17, 1955: Taken by the zest of talking to receptive ears, one has no time to choose le mot Piste, makes a dash at what one means to say, and ends with a series of quasi-musical sequences.. . . A hair divides this kind of talker from a deliberate liar, yet a difference remains and in judging a person one should keep it in mind. I. for instance, never mean to lie, but often hear myself saying things

that 'ain't quite so.' t This happened less frequently in conversation than it happens in the diaries. Both Iris Origo and Harold Acton, in their introductions, keep repeating how much the older Berenson excelled in conversation rather than in writing. It

Possible, in the thrust and counter-thrust of con- verse, to reach one or other of the facets of truth, or the essence of the matter or just to have great fun. But by• himself, in the diaries. there is a terrible amount of fiction. of 'ain't quite so.' For instance, the entries about Bene- detto. Croce: in Naples, in July, 1952, Berenson hesitates to call on Croce, does so, and is cor- dially welcomed. A bottle of vermouth is brought in 'with no tray,' and 'it was nasty stuff.' One never recalls Berenson drinking vermouth, and It would probably have seemed nasty to him in any case.

One could multiply examples. `S.S.' is noted as asking permission. to • write Berenson's biography. But S.S. did not ask for permission. The publishers did, and obtained it, with the proviso that Umberto Morra should also read

The author of the biography is accused of never having heard of the town of Prato. I think the first of many times I visited Prato was in 1922. These distortions end by invalidating what Iris Origo calls this 'long, haunted journey into his own consciousness.' The truth was known to Berenson, but was unpalatable, so he made a fiction. I suppose the last person to try such a journey in old age was Amiel in his Journal !Mime, published in 1884, and even his admirers found him `quelquefois insupportable par sa manie de tout compliquer pour decomposer tout.' Berenson's Sketch for a Self-Portrait did, in some measure, achieve what these last diaries so sig- nally fail to do, even if it also glosses and fic- tionalises here and there.

Miss Kiel's Treasury has some nice aphorisms and a little unpublished early material, much of it, however, consulted for the biography. Big chunks are hacked out of some of Berenson's finest writing and one hopes a little ruefully that the company kept by the extracts will not put off students of Italian art, for a quarter of the book again has paragraphs from the late diaries, in the main different extracts, but some- times overlapping with those in Sunset and 7'H'ilight. Miss Kiel gives us little snippets of Berenson's biography for each period from which she takes the extracts: I think the range of sub- jects is too widespread.

Umberto Morra in his Colloqui, jotted down between 1930 and 1941 in a light and agreeable Italian, has caught the accents of that talk, though, unfortunately, not the essence of the dialogue in it, since only one voice is noted down. It makes very enjoyable reading. Often and often Berenson in this slender volume speaks of England, only serving to remind one how com- pletely remote from England all the diary output is, despite appearing in such English dress. 'No Englishman cares about .esthetic problems, nor about any other problems except political ones,' says Berenson, and adds, 'it is all the fault of Bloomsbury . . .'—meaning, I suppose, Lytton Strachey, Keynes and Roger Fry. Very odd.

My personal view of these diary extracts, unlike the earlier Rumour and Reflection war-time ex- tracts, is that fiction predominates, and so they are not life-enhancing. None of what I have read makes me want to alter my biography, for that was concerned mainly with the creative first forty years.