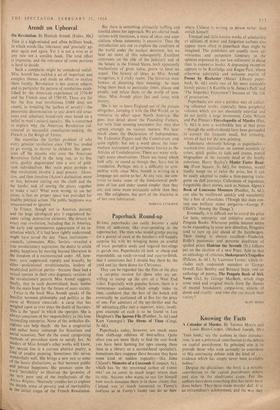 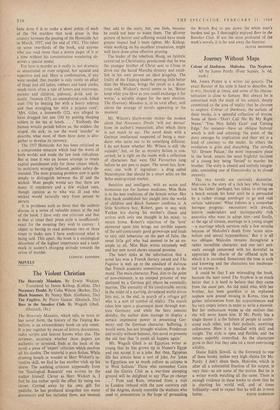 A Calendar of Murder. By Terence Morris and Louis Blom-Cooper. (Michael Joseph, 30s.) 'Tots book,' say the authors in their introduc- tion, 'is not a polemical contribution to the debate on capital punishment. Its principal aim is to provide those who wish seriously to contribute to this continuing debate with the kind of . . . evidence which has simply never been available before.'

Despite the disclaimer, the book is a notable contribution to the capital punishment debate and also to the abolitionist cause. For the authors have done something that has never been done before. They have made murder dull. It is an extraordinary achievement, and the way they have done it is to make a short precis of each of the 764 murders that took place in this country between the passing of the Homicide Act in March, 1957, and the end of 1962. This takes up some two-thirds of the book, and anyone who* can read more than a dozen pages of it at a time without his concentration wandering de- serves a special medal.

For here is murder as it really is, not dramatic or sensational or even original, but squalid and repetitive and sad. Here is confirmation, if any were needed, that murder is only rarely an affair of thugs and old ladies, robbers and bank clerks, much more often a tale of lovers and mistresses, parents and children, jealousy, drink and in- sanity. 'Jennion (23), an unemployed cook, killed aunt (54) by beating her with a heavy ashtray and then strangling her with a pyjama cord'; 'Mrs. Giles, a housewife (52), was alleged to have drugged her son (16) by putting sleeping tablets in his tea at lunch. . . .' Endlessly the human wrecks parade before us, the sodden, the stupid, the sick; to use the word 'murder' to describe what most of them have done is alto- gether to devalue its currency.

• The 1957 Homicide Act has been criticised as a compromise measure which had the worst of both worlds and made the law look ridiculous. But at least it was an honest attempt to retain capital punishment only for those crimes which, its architects wrongly believed, public safety de- manded. The most pressing problem now is quite simply to distinguish between the ill and the wicked. Most people would say that there are many ill murderers and a few wicked ones, though opinion as to who was ill and who wicked would naturally vary from person to person.

It is problems such as these that the authors discuss in a series of valuable essays at the end of the book. I have only one criticism and that is that at times their prose style is insufficiently exact for the meaning they wish to convey: I object to having to read sentences two or three times to make sure I have understood what is being said. This apart, the book is a sociological document of the highest importance and a land- mark in society's changing attitude towards the crime of murder.