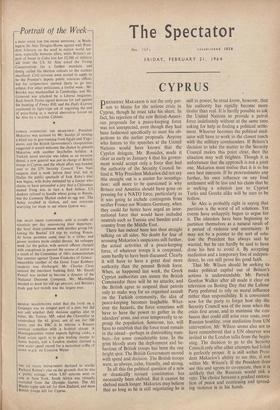 A BUSY WEEK FOR THE PRIME MINISTER: in Wash- ington Sir Alec Douglas-Home agreed with Presi- dent Johnson on the need to reduce world ten- sion, especially between allies, while Britain's ex- port of buses to Cuba lost her £2,500 of military aid from the US. Sir Alec asked the Young Conservatives for a further mandate, and firmly nailed his election colours to the nuclear masthead. Civil servants were invited to apply to be the Premier's deputy public relations officer, but his scriptwriters seemed likely to go into eclipse. For other politicians, a fretful week : Mr. Brooke was manhandled in Cambridge, and Mr. Grimond was attacked by a Liberal magazine. Back-bench Tories signed motions for and against the banning of Fanny Hill, and the Daily Express continued its tight-rope aot of regarding the end of price-fixing as a mental aberration forced on Sir Alec by a reckless Cabinet.

CYPRUS DOMINATED THE HEADLINES: President Makarios was accused by Mr. Sandys of turning a blind eye to gun-running from Egypt and Yugo- slavia, and the British Government's exasperation suggested it would welcome the chance to present Makarios with another Seychelles holiday. A Turkish naval exercise was taken as an invasion threat, a new general was put in charge of British troops in Cyprus, and the whole affair was handed over to the UN Security Council. Two Nazi suspects died a week before their trial, but in Dallas the public spectacle of Jack Ruby's trial was begun, with Ruby defended by a lawyer who claims to have persuaded a jury that a Chinaman named Fong was in fact a Red Indian. US dockers refused to handle wheat going to Russia, but the Common Market ended its egg war. The Army revolted in Gabon, and sent everyone scurrying for maps to see where Gabon was.

THE BRAIN DRAIN CONTINUED, With a couple of scientists per day announcing their departure: the 'beat' drain continues with another group fol- lowing the Beatles' US trip by visiting Russia. At home postmen came near to a strike, and power workers made similar threats. An unhappy week for the police, with several officers charged with conspiracy to pervert the course of justice as a result of the Committee of 100's demonstration last summer against Queen Frederika of Greece: meanwhile another of the Great Train Robbery suspects was discharged. Mr. Charles Clore entered the merchant banking field, Mr. Enoch Powell was invited to become a director of the National Discount Company, Mr. Macmillan decided to draw his old age pension, and Britain's trade gap last month was the largest ever.

BRISTOL MAGISTRATES ruled that the froth on a Guinness was an integral part of a pint, but did not add whether their decision applies also to bitter. Mr. Turton, MP, asked the Chancellor to reintroduce the 4d. groat, out of use for 300 years, and the BBC is to televise a Russian satirical comedian with a Scottish stooge. A Huntingdonshire rector exports fighting cocks, a Kent estate agent is to give trading stamps to house buyers, and a London student claimed a new water speed record for a motorised coffin of seven m.p.h. on Coniston Water.

THE US STATE DEPARTMENT declined to revoke Richard Burton's visa on the grounds that he was a 'public outrage,' while `LBJ' stetsons went on sale in New York. South Africa was virtually excluded from the Olympic Games. The All Blacks rugby side left for New Zealand, and more British troops left for Cyprus.