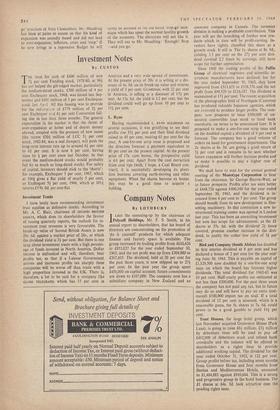 THE issue for cash of £400 million of new 54 per cent Funding stock, 1978-80, at 96f has not helped the gilt-edged market, particularly the medium-dated stocks; £500 million of 4 per cent Exchequer stock, 1968, was issued last Sep- tember and £400 million of 5 per cent Exchequer stock last April. All this fussing was to provide for the redemption of £779 million of 24 per cent Exchequer and 41 per cent Conversion fall- ing due in less than three months. The general expectation in the market is that the threat of over-expansion at home and of dearer money abroad, coupled with the pressure of new issues (the recent £304 million of LCC 51 per cent stock, 1982-84, was a real damper), will push the long-term interest rate up to around 61 per cent to 64 per cent. It is now 6 per cent, having risen by 4 per cent since last October. In that event the medium-dated stocks would probably fall by as much as long-dated stocks. For safety of capital, investors should stick to the 'shorts': for example, Exchequer 5 per cent, 1967, which at 1004 gives a flat yield of nearly 5 per cent, or Exchequer 54 per cent, 1966, which at 101f returns £5 9s. Od. per cent flat.

I have lately been recommending investment trust equities as defensive stocks. According to Mr. A. C. Blair, chairman of SECOND BRITISH AssErs, which does its shareholders the favour of issuing quarterly reports, the outlook for in- vestment trust revenues is very favourable. The break-up value of Second British Assets is now 29s. 6d. against a market price of 26s., at which the dividend yield is 31 per cent. But there is one snag about investment trusts with a high percent- age of funds invested in North America. Dollar income is unfranked and will, therefore, bear profits tax, so that if a Labour Government arrives and increases profits tax sharply these companies will be worse off than trusts with a high proportion invested in the UK. There is, therefore, a lot to be said for a company like GLOBE TELEGRAPH, which has 15 per cent in America and a very wide spread of investments. At the present price of 20s it is selling at a dis- count of 4s. 9d. on its break-up value and returns a yield of 3 per cent. GUARDIAN, with 22 per cent in America, is selling at a discount of 171 per cent. At 15s. 6d. the yield is 3.2 per cent, but the dividend could well go up from 10 per cent to 111 per cent.

Having recommended L. RYAN HOLDINGS on several occasions, it was gratifying to see their profits rise 331 per cent and their final dividend raised to 45 per cent, making 65 per cent for the year. A one-for-one scrip issue is proposed and the directors forecast a payment equivalent to 80 per cent on the present capital. At the present price of 17s. cum bonus, the prospective yield is 4.6 per cent. Apart from the coal extraction from coal tips (with, I hope, a Coal Board con- tract), it is successfully developing its plant- hire business covering earth-moving and other equipment. When the shares become ex bonus, this may be a good time to acquire a holding.