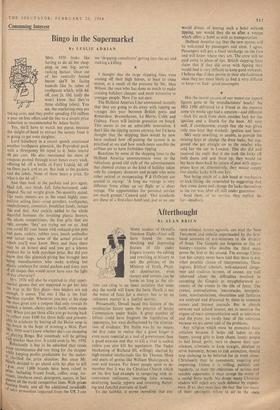 Bingo in the Supermarket

By LESLIE ADRIAN Mits. 1970 looks like having to do all her shop- ping in one big, nerve- racking bazaar. Once out of her centrally heated haven she'll be facing hazards like 3s. tubes of toothpaste which, with 4d.

off, cost 2s. 10d. (only she won't know that they're three shilling tubes). You see, the marketing men are taking over, and they prefer spending £16 million a year on free offers and the like to a simple price reduction as recommended by Adam Smith.

Yes, she'll have to watch her purse, because the sleight-of-hand to extract the money from it is going to get even sleighter.

Lord Sainsbury in a recent speech mentioned another toothpaste gimmick, the Pepsodent pack with a threepenny bit taped to it. Sales soared 40 per cent. He also mentioned the mass of coupons pushed through letter boxes every week, offering 6d. of a bottle of Fairy Liquid, 4d. off at Omo pack and so on. But look at the packets and the labels. None of them bears a price. So what is the 44. oil ?

And then look at the packets and jars, again. Half full, two thirds full, false-bottomed, odd- shaped. No net weight given. No quantity stated. The main sinners are in the usual highly com- petitive selling lines—soap powders, toothpastes, confectionery, cosmetics. breakfast foods, instant this and that. And cockily .added to the whole deceitful business the insulting plastic flowers, the idiotic competitions, the free gifts that are only samples 'they' are trying out on us. And You could fill your house with reduced-price pots and pans, cutlery, rubber toys, beach umbrellas and tartan rugs, none of the actual prices of Which you'll ever know. Here and there there may be an honest deal and you get a known Product for its bulk purchase price. But did you kaow that this gimmick-giving has brought into being manufacturers who make nothing but Plastic cowboys for cereal packets and tinny toys of all shapes that would never have seen the light of day otherwise?

Mrs. 1970 will also be expected to play super- market games that are supposed to get her into the trap in the first place—loss leaders are not enough, it seems. The one I like is the fruit Machine transfer. Whenever you buy at his shop the man gives you a coupon that only reveals its sYmbol, a lemon, cherry and so forth, when made wet- When you got three alike you go haring back to collect your £100 for three bells and presum- ably to celebrate by buying all the Heinz soup in the .house in the hope of winning a Mini. Poor wit's. 1970 won't know whether she's out shopping °51Playing Bingo. But somebody will be getting riv_11 quicker than ever. It could even be Mr. 1970.

Reluctantly it has to be admitted that resale 1‘)ri ce maintenance did one thing for the shopper ,‘hile keeping profits predictable for the maker. “it clarified the price situation. But since Mr. fleath decided to go ahead with his plan to kill 1.Pm. over 1,000 brands have been raised in Price, including frozen foods, coffee, soap, ice- cream, luncheon meat, detergents, sauces, in fact almost all the usual competitive lines. With prices 110_ating freely, and all the additional taradiddle of sales promotion imported from the US, I can

see 'shopping consultants' getting into the act and making a killing.

I thought that the large shipping lines were coming off their high horses, at least to some extent, as a result of the pressure by Mr. Max Wilson, the man who has done so much to make cruising holidays cheaper and more attractive to younger people. Now I'm not sure.

The Holland America Line announced recently that they are going to do away with tipping on voyages this year between British ports and Rotterdam, Bremerhaven, Le Havre, Cobh and Galway. Fares will include gratuities on board. This seems to me an admirable innovation. I don't like the tipping system anyway, but I'd have thought that the shipping lines would by now have realised how off-putting the system is as practised at sea and how much more sensible the airlines are to have forbidden tipping.

Reactions by some of the shipping lines to the Holland America announcement were in the ridiculous, grand old style of the advertisementS that showed cruises as the kind of holiday taken only by company directors and people who were either retired or recuperating. P & 0-Orient are quoted as saying: 'A long sea voyage is very different from either an air flight or a short voyage. The opportunities for personal service are much greater.' Cunard said: 'Our standards are those of a first-class hotel and, just as no one

would dream of leaving such a hotel without tipping, nor would they do so after a voyage which offers a hotel as. well as transportation.'

Holland America say that the new system NS ill he welcomed by passengers and crew. I agree. Passengers will pay a fixed surcharge on the fare and will know where they are. The crew will bo paid extra in place of tips. British shipping lines claim that if they did away with tipping they would find it very difficult to keep good stewards. I believe that if they persist in their old-fashioned ideas they are more likely to find it very difficult to keep—or find--good passengers.

Has the recent success of our motor-car export figures gone to the manufacturers' heads? An MG 1100 delivered to .a friend in the country, some six weeks ago had a separate—and different —lock for each front door, another lock for the ignition and a fourth for the boot. All very well, if cumbersome, except that she was given only two keys that worked: ignition and boot.

MG were unwilling, or unable, to provide the missing keys or change the door locks, but sug- gested she got straight on to the retailer who sold her the car in London. This she did and received the reply that if she took the locks off both doors and sent them up, they would let her have them back by return of post with appro- priate keys or, alternatively, they would supply two similar locks with one key.

Not being much of a dab hand at mechanics or lock-lifting, she responded by suggesting that they come down and change the locks themselves as the car was, after all, still under guarantee.

Send them, or no service, they replied. So far--deadlock.