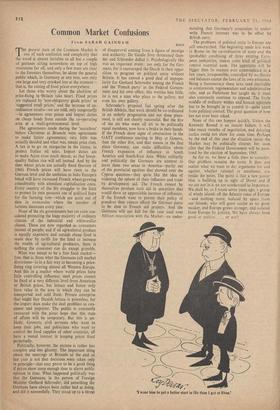 THE present state of the Common Market is one of such confusion and complexity that the wood is almost invisible to all but a couple of geniuses sitting somewhere on top of high mountains far off, and only a few trees are clear to the foresters themselves; let alone the general public which, in Germany at any rate, sees only one large and very crooked tree at the moment— that is, the raising of food prices everywhere.

Let those who worry about the abolition of price-fixing in 'Britain take heart. Fixed prices are replaced by 'non-obligatory guide prices' or 'suggested retail prices,' and the increase of co- ordination results—we are told, only temporarily —in agreements over prices and import duties on cheap foods from outside the co-operating area at a multi-governmental level.

The agreements made during the 'marathon' before Christmas at Brussels were agreements to make future agreements; very little was actually decided and what was, meant price rises. A tax is to go on margarine in the future, to protect Italian oil sales. Import duties are to make Asian rices much dearer, so that lower- quality Italian rice will sell instead. And by the time wheat prices are actually fixed (harvest of 1966) French prices will have risen to the German level and the ambition to bake Europe's bread will have increased French wheat-growing considerably with attendant capitalisation costs. Every country of the Six struggles to the limit to protect its own peasants out of political fears for the farming vote—which are quite out of date in economies where the number of farmers decreases every year.

None of the six governments has yet even con- sidered protecting the huge majority of ordinary citizens of the industrial and white-collar classes. These are now regarded as consumers instead of people; and if all agricultural produce is equally expensive and outside cheap food is made dear by tariffs for the fund to increase the wealth of agricultural producers, there is nothing the consumer can do except grumble.

What was meant to be a free food market— free, that is, from what the Germans call market distortions—is in a fair way to becoming a price- fixing ring covering almost all Western Europe. And this in a market where world prices have little controlling influence; steel prices cannot be fixed at a very different level from American or British prices, but lettuce and butter only have value in the area in which they can be transported and sold fresh. Private enterprise that might buy Danish lettuce is powerless, for the import dues make the deal profitless to con- sumer and importer. The public is constantly reassured with the pious hope that this, state of affairs will be temporary. But this is un- likely. Growers, civil servants who want to keep their jobs, and politicians who want to control the food supplies of other countries, all have a vested interest in keeping prices fixed perpetually.

Politically, however, the picture is rather less complex and less gloomy. The important thing about the meetings at Brussels at the end of last year is not that decisions were taken only in principle—that may prove to be a good thing if prices show steep enough rises to alarm public opinion in time. What happened politically was that the Germans, in the person of Foreign Minister Gerhard Schroeder, did something the Germans have always been rather bad at doing, and did it successfully. They stood up to a threat of disapproval coming from a figure of prestige and authority. De Gaulle Jove threatened thun- der and Schroeder defied it. Psychologically this was an important event: not onlyjor the Ger- mans, for it encouraged the Dutch in their oppo- sition to progress on political unity without Britain. It has caused a good deal of unpopu- larity for Gerhard Schroeder among the French and the 'French party' in the Federal Govern- ment and his own office; this worries him little, he is not a man who plays to the gallery, not even his own gallery.

Schroeder's proposal last spring after the British debacle, that work should be co-ordinated in an orderly progression and not done piece- meal, is still not clearly successful. But the five of the six who want all six to be politically equal members, now have a brake in their hands. If the French show signs of obstruction in the GATT conference starting in May at Geneva, then the other five, and that means in the first place Germany, can make difficulties about French expansion of influence in South America and South-East Asia. While militarily and politically the Germans are content to leave these two areas to America—partly out of the provincial egotism that showed over the Cyprus question—they quite like the idea of widening the sphere of their influence and trade by development aid. The French cannot by themselves produce such aid in quantities that would show an appreciable increase of influence. If the French want to pursue their policy of grandeur they cannot afford the German purse to be shut to French aid projects. And the Germans will not fall for the ruse used over African association with the Market—an under-

standing that Germany's concession to under- write French interests was to be offset by, British entry.

The problems of political unity in Europe are stilt unscratched. The beginning made last week in Rome on the co-ordination of taxes and the (probable) combining of three existing Euro- pean authorities, makes some kind of political control essential soon. The apparatus will be bigger than its masters ever contemplated in a few years, irresponsible, controlled by no checks and balances except the laws of its own existence. Being a bureaucracy these laws tend inevitably to conformism, regimentation and administrative rule; and as Parkinson has taught us, it must also constantly continue to expand. The lively muddle of ordinary wishes and human opinions has to be brought in to control it—quite apart from political control. The great question of how, has not even been asked.

None of this can happen quickly. Unless the Kennedy Round is an instant failure, it will take many months of negotiation, and delaying tactics could not show for some time. Perhaps by the end of this year the situation inside the Market may be politically clearer; but soon after that the Federal Government will be para- lysed by the election of September, 1965.

As for us, we have a little time to consider. Our problem remains the same. It does not matter what we want to do; arguments for and against, whether rational or emotional, are beside the point. The point is that a new power bloc is building up in sight of Dover and if we are not in it we are condemned to impotence. We shall be, as I. wrote some years ago, a group of windy islands off the Atlantic coast of Europe —and nothing more; isolated by space from our friends, who will grow cooler as we grow weaker, and Europe grows stronger, and isolated from Europe by politics. We h4ve always been good at politics . . . or not?

'I want him to get a better start in life than I got at Eton.'