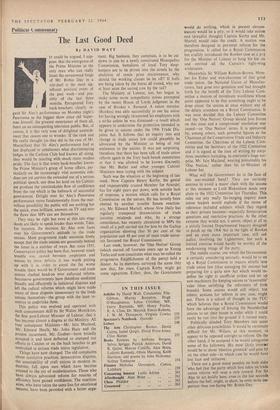 IT could be argued, I sup-

pose, that the emergence of the Prime Minister as the only man who can really blunt the envenomed fangs of Mr. Robin Day in a tele-duel is the most sig- nificant political event of the past week—and pos- sibly of the last three months. Enraptured Tory

back-benchers clearly re- gard Sir Alec's performance on Monday night's Panorama as the biggest show since old Super- mac himself, the greatest entertainer of them all, burst on an unsuspecting television public. But, of course, it is this very tone of delighted astonish- ment that causes one to wonder. If the rank and file really thought (as they did in the case of Mr. Macmillan) that Sir Alec's performance had at last displayed to unbelievers what discriminating judges in the Carlton Club had known all along. they would be reacting with much more modest pride. The fact is that every back-bencher knows the Prime Minister's grasp of home affairs, par. ticularly on the increasingly vital economic side. does not yet survive the extended test of a serious political speech, nor does his hold on his Cabinet yet produce the unmistakable flow of confidence from the top which is the hallmark of successful government. Delight over Sir Alec's Panorama performance sterns fundamentally from the mar- vellous possibility the public will see nothing but the quick, even brilliant, answers on TV and miss the flaws that MPs can see themselves.

They may be right but even at this late stage deeds are likely to speak louder than words. Take, for instance, the decision Sir Alec now faces over his Government's attitude to the trade unions. Most progressive trade unionists freely accept that the trade unions are genuinely behind the times in a number of ways. But since 1951, Conservative policy has been that, however much trouble was caused between employers and unions by these defects, it was worth putting up with it in order to avoid the far worse trouble there would be if Government and trade unions clashed head-on over enforced reform. Successive governments have therefore mediated blandly and effectively in industrial disputes and left the radical reforms which might have made many of these disputes unnecessary to the trade unions themselves—the group with the least in- centive to undertake them.

This policy was evolved and operated with such consummate skill by Sir Walter Monckton, the first post-Labour Minister of Labour, that it has become almost a dogma at the Ministry. All four subsequent Ministers—Mr. lain Macleod, Mr. Edward Heath, Mr. John Hare and the present incumbent, Mr. Godber—have broadly accepted it and have deflected or stamped out efforts in Cabinet or on the back benches to get embroiled in serious trade union legislation.

Things have now changed. The old complaints about restrictive practices, demarcation disputes, the unsuitability of craft unions in modern in- dustries, fall upon ears which have become attuned to the cry of modernisation..Those who have always advocated reform for reasons of efficiency have gained 'confidence. The reaction- aries, who have taken the same line for emotional reasons, have been provided with a better argu-

ment. Big business, they complain, is to be cut down to size by a newly constituted Monopolies Commission, battalions of loyal Tory shop- keepers are to be driven into the streets by the abolition of resale price maintenance; why should the working classes be let off? If bulls are being taken by the horns all round, why not at least seize the sacred cow by the tail?

The Ministry of Labour, too, has begun to make some more sympathetic noises prompted by the recent House of Lords judgment in the case of Rookes v. Barnard. A union member (Rookes) was able successfully to sue his union for having wrongly threatened his employers with a strike unless he was dismissed—a result which appears to undermine the protection intended to be given to unions under the 1906 Trade Dis- putes Act. It follows that an inquiry into and change in trade union law could plausibly be advocated by the Minister as being of real assistance to the unions. It was not surprising, therefore, that there has been talk of trade union reform again in the Tory back-bench committees or that it was allowed to be known discreetly that Mr. Butler and other younger Cabinet Ministers were toying with the subject.

Such was the situation at the beginning of last week. Now Captain Henry Kerby, the genial and impenetrably crusted Member for Arundel, has for eight years put down, with notable lack of response, a motion which calls for a Royal Commission on the unions. He has latterly been abetted by another notable Sussex reaction- ary, Mr. Edward Martell, whose New Daily has regularly trumpeted denunciation of trade unionist misdeeds and who, by a strange coincidence, has recently circulated to MPs the result of a poll carried but for him by the Gallup organisation showing that 50 per cent of the population and 48 per cent of male trade union- ists favoured the Royal Commission.

Last week, however, the 'One Nation' Group (which started off fourteen years ago as Young Turks and now constitutes what may be called the progressive, Establishment of the party) held a dinner. As its members surveyed the scene they saw that, for once, Captain Kerby might get some signatures. Either, then, the Government

would do nothing, which in present circum- stances would be a pity; or it would take action and (dreadful thought) Captain Kerby and Mr. Martell would take the credit. A motion was therefore designed to pre-empt reform for the progressives. It called for a Royal Commission but craftily introduced the Rookes case as a pcg for the Minister of Labour to hang his hat on and omitted .all the Captain's right-wing a rahesq ues.

Meanwhile Sir William Robson-Brown, Mem- ber for Esher and vice-chairman of that great trade union, the National Union of Manufac- turers, had gone into gestation and had brought forth for the benefit of the Tory Labour Com- mittee a motion of inordinate woolliness whose point appeared to be that something ought to be done about the unions at once without any of the delays attendant on a Royal Commission. It was soon decided that the Labour Committee and the 'One Nation' Group should join forces on this issue and a compromise' resolution was issued—on One Nation' terms. It is sponsored by, among others, such powerful figures as the Chairman of the Conservative Trade and Industry Committee, the Chairman of the Labour Com- mittee and the Secretary of the 1922 Committee and it is signed at the time of writing by sixty- three members including, to everyone's huge sur- prise, Mr. lain Macleod, wearing presumably his 'One Nation,' rather than his ex-Minister of Labour hat.

What will the Government do in the face of this star-studded band? They are certainly anxious•to avoid a major clash with the unions at this moment as Lord Blakenham made very plain to the 1922 Committee last Thursday. This rules out any really far-ranging inquiry since union leaders would explode if the terms of reference included subjects which they regard as their private business—especially demarcation questions and restrictive practices. At the other extreme they would not, it seems, object at all to a strictly limited Departmental Inquiry designed to patch up the 1906 Act in the light of Rookes and an even more important case, still sub judice, involving the Lightermen; but such a limited exercise would hardly be worthy of the modernising image of the party.

' The middle course, one which the Government is certainly considering seriously, would be to set up a Royal Commission to inquire strictly into trade union law (thus assuaging the unions) but preparing for a quite new Act which would re- define the right to unofficial strikes and set up new machinery for keeping unions to 'reasonable' rules (thus satisfying the reformers of both brands). Some unions would still object, but others, anxious for reform in any case, might not. There is a school of thought in the TUC which believes that a Royal Commission would have the advantage of forcing the Neanderthal unions to set their house in order while it could easily be run into the ground if it turned nasty.

Politically minded Tory Members can scent other delicious possibilities. It would be extremely difficult for Mr. Wilson, at this moment, to appear to be opposed outright to reform. On the other hand, if he accepted it he would antagonise some of his followers. His most likely counter would be to shout 'election gimmick' and pass by on the other side—in which case he would have lost face and initiative.

There are a good many pundits on both sides 'Who feel that the party which first takes on trade union reform will reap a rich reward. For Sir Alec to act boldly here, even in the last seconds before the bell, might, in short, be even more im- portant than out-facing Mr. Robin Day.