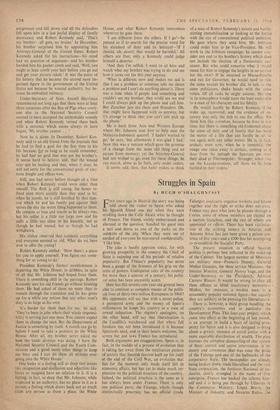 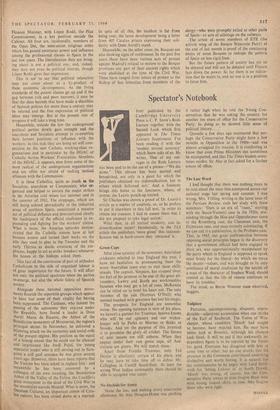 IVE years ago in Madrid the story was being r told about the visitor to Spain who asked his Spanish friend one day when they were strolling down the Calle Alcala what he thought of Franco. The friend, visibly embarrassed and alarmed at the question, bundled his guest into a taxi and drove to one of the parks on the outskirts of the city. When they were out of earshot of everyone he murmured confidentially, '1 like him.'

The joke is hardly apposite today, for with growing prosperity in the country the Chief of State is enjoying one of his periods of relative popularity. But Franco's popularity has never been a gauge of the firmness of his grip on the reins of powers. Undisputed ruler of the country for more than a quarter of a century, his politi- cal sense has been uncannily acute.

How has this seventy-one-year-old general been able to continue as complete master of the politi- cal lives of thirty-two million Europeans in 1964? His opponents will say that with a secret police, a pampered army and the money of Spain's millionaires he keeps his country in a state of cowed subjection. The regime's apologists, on the other hand, will say that liberalisation is the Caudillo's watchword and that where full freedom has not been introduced it is because Spaniards need, and in their hearts welcome, the severe but just laws Franco has introduced.

Both arguments are exaggerations. Spain is, in fact, in the middle of a process of evolution that is taking her away from the totalitarian pattern of society that Spanish fascism built up for itself at the end of the Civil War, an evolution that has for the moment only made itself felt in economic affairs, but has yet to make much im- pression on the political structure of the country. Indeed, the political structure is the same as it has always been under Franco. There is only one political party, the Falange, which, though intellectually prostrate, has no official rivals.

Falangist sindicatos organise workers and bosses together and the right to strike does not exist. Franco may pass what laws he pleases through a Cortes, sonic of whose members are elected on a narrow franchise, and the rest of whom are appointed ex officio. There has been victimisa, tion of the striking miners in Asturias and Antonio Amat has just been given a prison sen- tence of five years and a £300 fine for attempting to re-establish the Socialist Party.

The present situation in official Spanish politics is perhaps best reflected in the make-up of the Cabinet. The largest number of Ministers are military men—Franco's Deputy, General Muiloz Grandes, the three service Ministers, the Interior Minister, General Alonso Vega, and the Under-Secretary to the friesidency, Admiral Carrero Blanco. It would be wrong to class all these officers as blind reactionary monsters— Munoz, for 'instance, a modest man. is a reasonably popular national figure—but equally they are unlikely to be pressing for liberalisation.

There is, however, a third group handling the country's economics and in particular the Development Plan. This four-year project, which came into effect at the beginning of last month, is an attempt to build a basis of lasting' pros- perity for Spain and it is also designed to bring about a greater measure of social justice with a more equitable distribution of wealth. The plan foresees the complete dismantling of that system of State control and active intervention in in- dustry and commerce that was once the pride of the Falange-and one of the hallmarks of the corporative State. The monopolies are already being broken down, trade liberalised and the vast State corporation, the Institute Nacional de In- dustria, slowly strangled in the name of free enterprise. Franco has backed the scheme him- self and it is being put through by Ullastres in the Commerce Ministry, Lopez Bravo, the Minister of industry, and Navarro Rubio. the Finance Minister, with Lopez Rod6, the Plan Commissioner, in a key position outside the Cabinet. All four are, incidentally, members of the Opus Dei, the semi-secret religious order which has gained enormous power and influence among the professional classes in Spain in the last few years. The liberalisation they are bring- ing about is not a political one, and, indeed, they may not even be political liberals, though Lopez Rod6 gives that impression.

This is not to say that political relaxation may not come about as a by-product of these economic developments. As the living standards of the poorer classes go up and if the gap between rich and poor narrows, it may be that the class hatreds that have made a shambles of Spanish politics for more than a century may be relaxed and the free expression of political ideas may emerge. But at the present rate of progress it will take a long time.

Meanwhile, outside the law the underground political parties slowly gain strength and the anarchists and Socialists attempt to re-establish their former positions of influence with the . workers. In this task they are being set stiff com- petition by the new Catholic working-class or- ganisations and in particular by the HOAC or Catholic Action Workers' Fraternities. Members of the HOAC, it appears, now form some of the most radical of the underground organisations and are often not afraid of making tactical alliances with the Communists.

It is these Catholics, quite as much as the Socialists, anarchists or Communists, who or- ganised and helped to sustain the major strikes in the Asturian coal mines last summer and in the summer of 1962. The stoppages, which are still being echoed sporadically in the, industrial areas of northern Spain, constituted a massive act of political defiance and demonstrated clearly the inadequacy of the official sindicatos in ex- pounding and fighting for the workers' claims. What is more, the Asturian episodes demon- strated that the Catholic unions have at last become honest and turned their backs on the r8le they used to play in 'the Twenties and the early Thirties as docile creatures of the em- ployers, happy to act as strike breakers whenever the bosses or the bishops asked them.

This fact of the conversion of part of orthodox Catholicism to the side of organised labour is of great importance for the future. It will affect not only the political spectrum when the parties re-emerge, but also 'the whole fabric of Spanish society.

Alongside these national opposition move- ments flourish the separatist groups which appear to have lost none of their vitality for having been suppressed. The Catalans, who lament the passing of the autonomy they enjoyed under the Republic, have found a leader in Dom Aureli Maria de Escarre, the Abbot of the Benedictine monastery of Montserrat, the region's principal shrine. In November, he delivered a blistering attack on the economic and social evils of the present regime. His position as the equal of a bishop meant that he could not be silenced and imprisoned like Jordi Pujol, the young separatist leader who is still serving out in Sara- gossa a stiff gaol sentence he was given several years ago. However, there have been reports that the Vatican has been asked to replace him: and meanwhile he has been answered by a colleague of his own standing, the Benedictine Abbot of the Valley, of the Fallen, the Caudillo's great monument to the dead of the Civil War in the mountains outside Madrid. What is more, the Omnium Cultural, an important centre of Cata- lan culture, has been closed down as a reprisal. In spite of all this, the incident is far from being over, the latest development being a letter from 407 Catalan priests expressing their soli- darity with Dom Aureli's stand.

Meanwhile, on the other coast the Basques are also showing signs of restlessness. In the past five years there have been various acts of protest against Madrid's refusal to restore to the Basque provinces any part of their ancient rights which were abolished at the time of the, Civil War. These have ranged from letters of protest to the Bishop of San Sebastian from members of the clergy—who were promptly exiled to other parts of Spain—to acts of sabotage on the railways.

The arrest of seven members of ETE (the activist wing of the Basque Separatist Party) at the end of last month is proof of the continuing desire of some Basques to reshape the pattern of Spain on less rigid lines.

But the future pattern of society has yet to be debated and will not be debated until Franco lays down the power. So far there is no indica- tion that he wants to, and no one is in a position to force him.