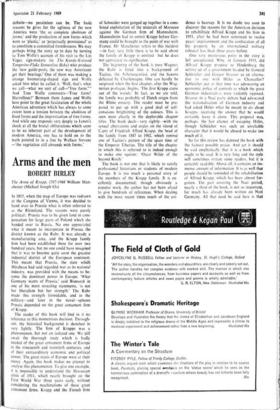 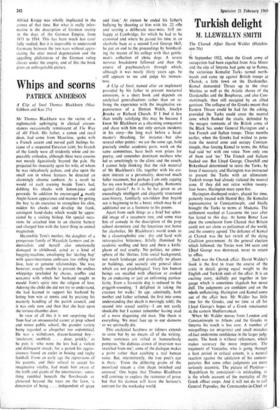 In 1815, when the map of Europe was redrawn at the Congress of Vienna, it was decided to hand over to Prussia what is often referred to as the Rhineland. The reasons were purely political: Prussia was to be given land in com- pensation for large parts of Poland which she handed over to Russia. No one appreciafed what it meant to incorporate in Prussia the district known as the Ruhr. It was already a manufacturing area, and the Krupp family firm had been established there for over two hundred years, but no one could have imagined that it was to become quite soon the greatest industrial district of the European continent. This meant that Prussia, the state what Mirabeau had said regarded war as its national industry, was provided with the means to be- come the dominant power in Europe. 'What Germany wants of Prussia,' said Bismarck in one of his most revealing statements, 'is not her liberalism but her strength.' The Ruhr made this strength formidable, and in the military—and later in the naval—spheres Prussia depended on the great armament firm of Krupp.

The reader of this book will find in it no reference to this momentous decision. Through- out, the historical background is sketched in very lightly. The firm of Krupps was a phenomenon, but not an isolated one. We still await the thorough study which is badly needed of the great armament firms of Europe in the nineteenth and twentieth centuries, and of their extraordinary economic and political power. The great states of Europe were at their mercy. Again, this book makes no attempt to analyse this phenomenon. To give one example, it is impossible to understand the Moroccan crisis of 1911, which nearly brought on the First World War three years early, without considering the machinations of these great armament firms. Krupp and the French firm of Schneider were ganged up together in a com- bined exploitation of the minerals of Morocco against the German firm of Mannesheim. Mannesheim had to outwit Krupp before Ger- many could be brought to the point of war with France. Mr Manchester refers to this incident —in fact, very little there is to be said about the family of Krupp is omitted—but he does not appreciate its significance.

The beginning of the book is pure Wagner; the Ruhr is fitted into a background of Tacitus. the Nibehingenlied, and the Saxons defeated by Charlemagne. One can hardly be surprised when the first chapter, after the Wag- nerian prologue. begins, 'The first Krupp came out of the woods.' In fact, as we are told, the family was probably of Dutch origin from the Rhine estuary. The reader must be pre- pared to put up with a good deal of self- conscious brightening of the colours. This is seen most clearly in the deplorable chapter titles. The book deals—very rightly—with the sexual aberrations and orgies on the island of Capri of Friedrich Alfred Krupp, the head of the family from 1887 to 1902, which remind one of Tacitus's picture of the spare time of the Emperor Tiberius. The title of the chapter in which this is referred to is indeed enough to make one squirm: 'Oscar Wilde of the Second Reich.'

The book is not one that is likely to satisfy professional historians or students of modern Europe. It is too much a personal story of the members of the Krupp family. It is ex- cellently documented; though obviously a popular work, the author has not been afraid to give hundreds of references. When dealing with the most recent times much of the evi- dence is hearsay. It is no doubt too soon to discover the reasons for the American decision

to rehabilitate Alfried Krupp and his firm in 1951, after he had been sentenced to twelve years' imprisonment and the confiscation of all his property by an international military tribunal less than three years before.

One very mysterious point in the story is left unexplained. Why, in January 1933, did Alfried Krupp propose to Hindenburg the setting up of a government headed by General Schleicher and Gregor Strasser as an alterna- tive to one with Hitler as Chancellor? Schleicher just at that time was advocating an economic policy of controls to which the great German industrialists were violently opposed. Strasser in a Nazi party debate had advocated the nationalisation of German industry and had asked Hitler what he meant to do about Krupps, receiving the answer that he would certainly leave it alone. This proposal was, perhaps, the last chance of escaping Hitler, though Schleicher was such an unreliable character that it would be absurd to make too much of it.

So far this review has damned the book with the faintest possible praise. And yet it should be said emphatically that it is a book which ought to be read. It is very long and the style will sometimes irritate some readers, but it is certainly readable. Above all, it contains an Im- mense amount of information It is as well that people should be reminded of the rehabilitation of Alfried Krupp, which has been almost for- gotten. The part covering the Nazi period, nearly a third of the book, is not so important, for much has already been written on Nazi Germarty. All that need be said here is that

Alfried Krupp was wholly implicated in the crimes of that time. But what is really infor- mative is the description of German society in the days of the German Empire, from 1871 to 1914. This has been much less care! fully studied. But ills impossible to understand Germany between the two wars without appre- ciating the utter moral degeneration and the appalling philistinism of the German ruling classes under the empire, and of this the book gives an unforgettable picture.