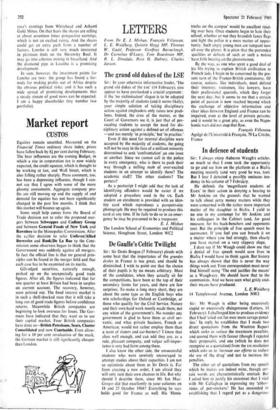 Sir; Sir Denis Brogan (7 February) pleads with some heat that the importance of the grandes ecoles in France is too great, and should be diminished. I wish to point out that the choice of their pupils is by no means arbitrary. Most

of the candidates, when they actually sit for the competitions, have been at the top of their

secondary forms for years, and there are few surprises. To make a long story short, they are about the same type as the English boys who win scholarships for Oxford or Cambridge, or those who qualify for the Civil Service. Nature and their own hard work mostly made them, not any whim of the government's. No wonder any government is glad to have them as civil ser- vants; and what private business, French or

American, would not rather employ them than a team of rioters and car-burners? I know that class well enough, and can add they are, as a

rule, pleasant company, and vulgar self-impor- tance is very bad form among them.

I also know the other side, the unsuccessful students who were unwisely encouraged to attempt studies above their capacities. I am not

so optimistic about them as Sir Denis is. Far from creating a new order, I am afraid they will only ruin their own chances in life. But why should I describe them, since Mr Ian Mac- Gregor did that excellently in your columns on 18 and 25 October 1968? Everything he says holds good for France as well. His `Home truths on the campus' would be excellent raid- ing over here. Once students begin to hate their School, whether or not they brandish fancy flags and fight the police is a mere matter of oppor- tunity. Such angry young men are rampant now all over the planet. It is plain that the pretended qualities or defects of such or such a nation "-have little bearing on the phenomenon.

By the way, as one who spent a good deal of his life trying to explain British civilisation to 'French' lads, I begin to be concerned by the pre- sent turn of the Franco-British controversy. Of course, nations, like individuals, must defend their interests; statesmen, like lawyers, have their professional quarrels, which they forget the next day; but it seems to me that a certain point of passion is now reached beyond which the exchange of objective information and clear ideas between England and France can be impaired, even at the level of private persons; and it would be a great pity, as even the Napo- Iconic wars did not stop that flow.