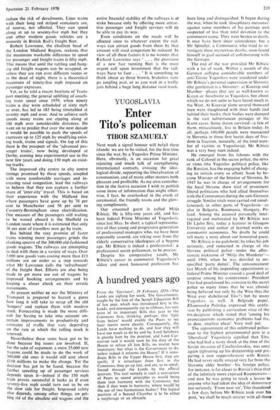 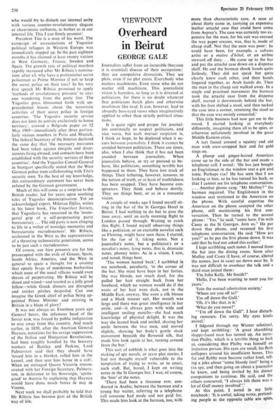 Next week a signal honour will befall these islands: we are to be visited, for the first time since the war, by a Yugoslav Prime Minister. Here, obviously, is an occasion for great rejoicing and much talk of strengthening international contacts, crossing the ideo- logical divide, supporting the liberalisation of communism, and of many other matters both pleasant and profitable. As my own contribu- tion to the festive occasion I wish to publish some items of information that might other- wise, I fear, be overlooked in the crush of ceremonial, the friendly toasts and the glow- ing compliments.

Our esteemed guest is called Mitja Ribicic. He is fifty-one years old, and has been federal Prime Minister of Yugoslavia since last May. In short, a typical representa- tive of that young and progressive generation of professional managers who, we have been repeatedly assured, are taking over from the elderly conservative ideologues of a bygone age. Mr Ribicic is indeed a professional: a professional secret policeman, to be precise.

Despite his comparative youth, Mr Ribicic's career in communist Yugoslavia's oldest and most honoured profession has been long and distinguished. It began during the war, when he took 'disciplinary measures'

against some members of his partisan unit suspected of less than total devotion to the communist cause. They were beaten to death. It may have been sheer coincidence, but a Mr Spindler, a Communist who tried to in- vestigate these mysterious deaths, soon found himself in gaol accused of collaborating with the Gestapo.

The end of the war provided Mr Ribicic with a lot of work. Within a month of the German collapse considerable numbers of anti-Titoite Yugoslays were murdered under Mr Ribicic's personal supervision in Slovenia (the gentleman is a Slovene): at Kocevje and Maribor—places that are as well-known as Katyn or Auschwitz to Yugoslays, but about which we do not seem to have heard much in the West. At Kocevje alone several thousand men were slaughtered with their hands tied behind their backs; their bodies were dumped in the vast subterranean passages of the Karst caves. Some dozen survived—a few of them, miraculously, live in Britain today. In all, perhaps 100.000 people were massacred in Slovenia in those first hectic days of free- dom (a fraction, naturally, of the total num- ber of victims in Yugoslavia). Mr Ribicic was a very busy man indeed.

He emerged from his labours with the rank of Colonel in the secret police, the OZNA or VDBA (the Yugoslav political police, like the Russian, has the engaging habit of chang- ing its initials every so often). Soon he be- came Minister of the Interior of Slovenia. In 1947 he was in charge of arrangements for the local Slovene show trial of prominent liberal politicians who had allied themselves with the Communists during the anti-German struggle. Similar trials were carried out simul- taneously in other parts of Yugoslavia—as also in Bulgaria, Roumania, Hungary, Po- land. Among the accused personally inter- rogated and maltreated by Mr Ribicic was Dr Ljubo Sirc, today a lecturer in Glasgow University and author of learned works on communist economics. No doubt he could tell many a story about our honoured guest.

Mr Ribicic is no gadabout; he takes his job seriously, and remained in charge of the Slovene political police—under the affec- tionate nickname of 'Mitja the Murderer'— until 1960, when he was detailed to un- specified 'party duties'. The announcement last March of his impending appointment as federal Prime Minister caused a good deal of surprise among his countrymen : President Tito had proclaimed his aversion to the secret police so many times that he was already being believed not only by the West (has the West ever disbelieved Tito?) but by many Yugoslays as well. A Belgrade paper, Ekonomska Politika, expressed this confu- sion by publishing a curriculum vitae of the Pm-designate which stated that 'among his preoccupations economic problems had the, to date, smallest place'. Very well put.

The appointment of this celebrated police- man to the highest governmental post in a 'liberalised' Yugoslavia signified that Tito, who had had a nasty shock at the time of the Soviet invasion of Czechoslovakia, was once again tightening up his dictatorship and pre- paring a new rapprochement with Russia. He had never really strayed very far from the Slavonic elder brother—his foreign policy, for instance, is far closer to Russia's than that of the infinitely more exposed Roumanians—

and now he was going to teach a lesson to anyone who had taken the idea of democracy too seriously. 'From now on', Tito thundered

a few days before Mr Ribicic took over hie post, 'we shall be much stricter with all those

who would try to disturb our internal unity with various counter-revolutionary slogans or chauvinistic outbursts, to bother us in our internal life. This I can firmly promise'.

President Tito is a man of his word. The campaign of assassinations of Yugoslav political refugees in Western Europe was immediately stepped up. In the past eighteen months it has claimed at least twenty victims in West Germany, France, Sweden and Spain. The growth rate of political murders rapidly increased after Mr Ribicic's nomina- tion: after all, why have a professional secret policeman as Prime Minister if not to keep the secret police on their toes? In his very first speech Mr Ribicic promised to apply `methods of revolutionary pressure' to any- one wandering from the party line. The Yugoslav press blossomed forth with un- precedented boasts about the terroristic activities of their secret police in _ foreign countries. 'The Yugoslav security service does not limit its activity exclusively to home territory', crowed a Belgrade paper on 12 May 1969—immediately after three particu- larly vicious murders in Paris and Munich. The federal Secretary of the Interior declared the same day that 'the necessary measures had been taken against émigrés and diver- sionists living abroad, and contacts have been established with the security services of these countries'. And the Yugoslav Consul-General in Stuttgart specifically stated that the West German police were collaborating with Tito's security men. To the best of my knowledge, this extraordinary statement has never been refuted by the German government.

Much of this will come as a surprise to the British reader, fed for years upon soothing tales of Yugoslav democratisation. Yet an acknowledged expert, Milovan Djilas, writes in his latest book, The Unperfect Society, that Yugoslavia has remained in the 'mana- gerial grip of a self-perpetuating party bureaucracy ... The old party is now clinging to life in a welter of nostalgic memories and bureaucratic recrudescences'. Mr Ribicic, acclaimed in the West as the representative of a thrusting technocratic generation, seems to be just such a recrudescence.

Of course, our bien pensants are far too preoccupied with the evils of Greece, Spain, South Africa, America, and the West in general to spare a thought for a country that openly brags of murderous barbarities which none of the usual villains would even dream of perpetrating. Mr Ribicic will be dined and wined—and toasted as a jolly good fellow—while Greek dinners are disrupted and cricket pitches despoiled. Can one imagine the Greek chief of police being ap- pointed Prime Minister and arriving in Britain in a blaze of glory?

It was not always so. Fourteen years ago General Serov, the infamous head of the Soviet KGB, was forced by public indignation to stay away from this country. And much earlier, in 1850, after the Austrian General Haynau, notorious for his savage suppression of the Italian and Hungarian Revolutions, had been roughly handled by the brewery workers of Barclay and Perkins, Lord Palmerston said that they should have `tossed him in a blanket, rolled him in the kennel, and then sent him home in a cab'. When an outraged Queen Victoria remon- strated with her Foreign Secretary, Palmers- ton, in deference to his Sovereign, 'apolo- gised' to Austria by explaining th4t Haynau would have done much better fo stay in Vienna.

Next week we shall probably be told that Mr Ribicic has become part of the British way of life.