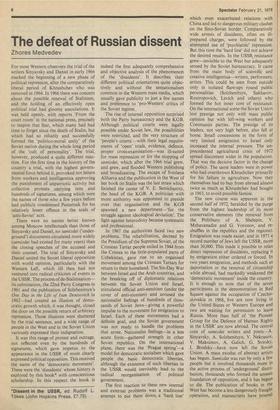 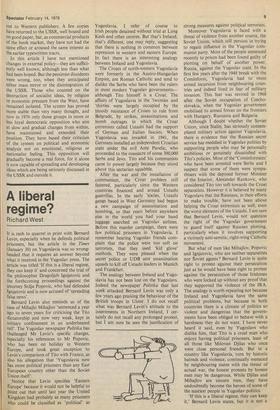 The defeat of Russian dissent

For most Western observers the trial of the writers Sinyavsky and Daniel in early 1966 marked the beginning of a new phase of political repression, after the comparatively liberal period of Khrushchev who was removed in 1964. In 1966 there was concern about the possible renewal of Stalinism, and the holding of an effectively open political trial had gloomy associations. It was held openly, with reports 'From the court room' in the national press, precisely to inspire that fear, which many had had time to forget since the death of Stalin, but which had so reliably and successfully formed the 'politico-moral unity' of the Soviet nation during the whole long period of the 'cult of personality'. The trial, however, produced a quite different reaction. For the first time in the history of the country a trial, with the highest governmental force behind it, provoked not letters from workers and intelligentsia approving the punishment of unpatriotic activity but collective protests carrying tens and hundreds of signatures, among which were the names of those who a few years before had publicly condemned Pasternak for his relatively lesser offence in the scale of 'anti-Soviet' acts.

There were no names better known among Moscow intellectuals than those of Sinyavsky and Daniel, no samizdat ('underground') documents circulated more widely (samizdat had existed for many years) than the closing speeches of the accused and their counsel. The trial of Sinyavsky and Daniel united the Soviet liberal opposition with world opinion, particularly with the Western Left, which till then had not ventured into radical criticism of events in the USSR. The process of de-Stalinisationits culmination, the 22nd Party Congress in 1961 and the publication of Solzhenitsyn's One Day in the Life of Ivan Denisovich in 1962—had created an illusion of democratic growth which, it was thought, closed the door on the possible return of arbitrary repression. Those illusions were shattered by the trial sentence, and a wide range of people in the West and in the Soviet Union variously expressed their indignation.

It was this range of protest and outrage, not reflected even by the hundreds of signatures, which gave impetus to the appearance in the USSR of more clearly expressed political opposition. This received the name of the 'democratic movement'. These were the `dissidents' whose history is explored by this book* with conscientious scholarship. In this respect the book is indeed the first adequately comprehensive and objective analysis of the phenomenon of the 'dissidents'. It describes their different political orientations quite objectively and without the sensationalism common in the Western mass media, which usually gave publicity to just a few names and preference to 'pro-Western' critics of the Soviet regime.

The rise of internal opposition surprised both the Party bureaucracy and the KGB. Although political courts were legally possible under Soviet law, the possibilities were restricted, and the very structure of 'people's courts'—with their legal requirements of 'open' trials, evidence, defence, proper cross-examination—was ill-suited for mass repression or for the stopping of samizdat, which after the 1966 trial grew, and grew, and flooded Western publishing and broadcasting. The escape of Svetlana Alilueva and the publication in the West of her book on Stalin was the last straw which finished the career of V. E. Semichastny, the head of the KGB. A politician with more authority was appointed to preside over that organisation and the KGB spawned a new department—Tor the struggle against ideological deviation'. The fight against heterodoxy became systematic and professional.

In 1967 the authorities faced two new problems. The rehabilitation, decreed by the Presidium of the Supreme Soviet, of the Crimean Tartar people exiled in 1944 from the Crimea to the little-populated parts of Uzbekistan, gave rise to an organised movement among the Crimean Tartars for return to their homeland. The Six-Day War between Israel and the Arab countries, and the breaking off of diplomatic relations between the Soviet Union and Israel, stimulated official anti-semitism (under the cover of anti-zionism) and aroused the nationalist feelings of hundreds of thousands of Soviet Jews—giving a powerful impulse to the movement for emigration to Israel. Each of these movements had a definite goal, and the Soviet government was not ready to handle the problems that arose. Nationalist feelings—in a less acute form—gathered strength in other Soviet republics. On the international plane, there was the 'Prague spring'—a model for democratic socialism which gave people the basic democratic liberties, although the existence of such liberties in the USSR would inevitably lead to the radical reorganisation of political government.

The first reaction to these new internal and external problems was a traditional attempt to put them down, a 'hard line' which even exacerbated relations with China and led to dangerous military clashes on the Sino-Soviet border. Comparatively wide arrests of dissidents, often on illprepared charges, were followed by the attempted use of 'psychiatric' repression. But this time the 'hard line' did not achieve the desired results. In the USSR, resistance grew—invisible to the West but adequately sensed by the Soviet bureaucracy. It came from the main body of scientific and creative intelligentsia—writers, performers, artists. This could be seen from outside only in isolated flare-ups round public personalities (Solzhenitsyn, Sakharov, Rostropovich, Levich and others) who formed the hot inner core of resistance. On the international scene the Soviet Union lost prestige not only with mass public opinion but with left-wing workers and Communist parties. The prestige of its leaders, not very high before, also fell at home. Small concessions in the form of very limited emigration to Israel only increased the internal pressure. The unprecedented agricultural crisis of 1972 spread discontent wider in the population. That was the decisive factor in the change of policy. The same leaders were in power who had overthrown Khrushchev primarily for his failure in agriculture. Now they themselves had to buy from abroad almost twice as much as Khrushchev had bought in 1963, to avoid possible famine.

The new course was apparent in the second half of 1972, heralded by the purge from the highest leadership of its most conservative elements (the removal from the Politburo of A. Shelepin, V. Mzhavanadze and G. Voronov, and reshuffles in the republics and the regions). Emigration was made easier, and in 1973 a record number of Jews left the USSR, more than 30,000. This made it possible to relax direct repression of dissidents, replacing it by emigration either ordered or forced. In two years emigration, and methods such as deportation or the removal of citizenship while abroad, had markedly weakened the 'democratic movement' inside the country. It is enough to note that of the seven participants in the demonstration in Red Square against the occupation of Czechoslovakia in 1968, five are now living in the United States or Western Europe and two are waiting for permission to leave Russia. More than half of 'the Pioneer Group for the Defence of Human Rights in the USSR' are now abroad. The central core of samizdat writers and poets—A. Sinyavsky, A. Solzhenitsyn, V. Nekrasov, V. Maksimov, A. Galich, G. SvirskY, I. Brodsky—have now left the Soviet Union. A mass exodus of abstract artists has begun. Samizdat was run by only a few people but it involved thousands more in the active process of 'underground' distribution, thousands who formed the unseen foundation of opposition, and it has begun to die. The publication of books in the West has become a less dangerously fraught operation, and manuscripts have poured out to Western publishers. A few copies have returned to the USSR, well bound and on good paper, but, as commercial products of the book market, they have not had the same effect or aroused the same interest as the earlier typewritten tracts.

In this article I have not mentioned changes in external policy—they are sufficiently well known, although less than what had been hoped. But the pessimist dissidents were wrong, too, when they anticipated either mass terror or the disintegration of the USSR. Those who counted on the destruction of socialist ideas, by religion or economic pressure from the West, have remained isolated. The system has proved more stable than very many thought, and now in 1976 only those groups in more or less loyal democratic opposition who aim at slow and gradual changes from within, have maintained and extended their Position. They have based their criticism of the system on political and economic analysis not on emotional, religious or nationalist feeling. This opposition will gradually become a real force, for it alone is now capable of spreading and developing ideas which are being seriously discussed in the USSR and outside it.