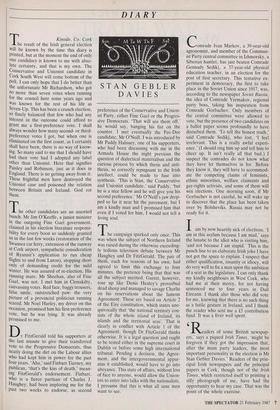 TKinsale, Co. Cork . he result of the Irish general election will be known by the time this diary is printed, but at the moment the end of only one candidacy is known to me with abso- lute certainty, and that is my own. The Conservative and Unionist candidate in Cork South West will come bottom of the poll. I can only hope that I do better than the unfortunate Mr Richardson, who got no more than seven votes when running for the council here some years ago and was known for the rest of his life as Seven-Up. This has been a crunch election, so finely balanced that few who had any interest in the outcome could afford to grant me a first-preference vote. I shall always wonder how many second- or third- preference votes I got, but when one is eliminated on the first count, as I certainly shall have been, there is no way of know- ing. So many said to me that I should have had their vote had I adopted any label other than Unionist. Here that signifies Paisley and Robinson, just as it does in England. There is no getting away from it. These frightful men have destroyed the Unionist case and poisoned the relation between Britain and Ireland. God rot them.

The other candidates are an assorted bunch. Mr Jim O'Keeffe, a junior minister in the outgoing Fine Gael government, claimed in his election literature responsi- bility for every boon so suddenly granted us in the last few weeks (restoration of the Swansea car ferry, extension of the runway at Cork airport, sympathetic consideration of Ryanair's application to run cheap flights to and from Luton), stopping short only of demanding credit for the mild winter. He was assured of re-election. His running mate, Mr Sheehan, also of Fine Gael, was not. I met him in Clonakilty, canvassing votes. Red face, baggy trousers, false smile, outstretched paw: the very picture of a provincial politician running scared. Mr Noel Hurley, my driver on this occasion, promised him his first-preference vote, but he was lying. It was already promised to me.

Dr FitzGerald told his supporters at the last minute to give their transferred vote to the Progressive Democrats, thus neatly doing the dirt on the Labour allies who had kept him in power for the past four years. `Aha,' said Finbarr Tierney, my publican, 'that's the kiss of death,' mean- ing FitzGerald's endorsement. Finbarr, who is a fierce partisan of Charles J. Haughey, had been imploring me for the past two weeks to endorse, as second preference of the Conservative and Union- ist Party, either Fine Gael or the Progres- sive Democrats. 'That will see them off,' he would say, banging his fist on the counter. I met eventually the Pee-Dee candidate, Mr O'Neill. I was introduced by Mr Paddy Halissey, one of his supporters, who had been discussing with me in the Armada House the night previous the question of dialectical materialism and the curious process by which thesis and anti- thesis, so correctly repugnant to the Irish intellect, could be made to fuse into synthesis. 'This is Stan, the Conservative and Unionist candidate,' said Paddy, tut he is a nice fellow and he will give you his second preference.' Mr O'Neill's jaw drop- ped so far it near hit the pavement, but I am a kindly man and I promised him that even if I voted for him, I would not tell a living soul.

The campaign sparked only once. This was when the subject of Northern Ireland was raised during the otherwise exceeding- ly tedious television debate between Mr Haughey and Dr FitzGerald. The pair of them, each for reasons of his own, had agreed to limit this exchange to four minutes, the pretence being that that was all the subject merited. Garret, however, rose up like Denis Healey's proverbial dead sheep and managed to savage Charlie on his reservations about the famous Agreement. These are based on Article 2 of the Eire constitution, which states une- quivocally that 'the national territory con- sists of the whole island of Ireland, its islands and the territorial seas'. That is clearly in conflict with Article 1 of the Agreement, though Dr FitzGerald thinks otherwise. It is a legal question and ought to be tested either in the supreme court in Dublin or before some high international tribunal. Pending a decision, the Agree- ment, and the intergovernmental appar- atus it established, would have to go into abeyance. This state of affairs, without loss of face to anyone, would allow the Union- ists to enter into talks with the nationalists. I presume that this is what all sane men want to see. Comrade Ivan Markov, a 39-year-old agronomist, and member of the Commun- ist Party central committee in Izhmorsky, a Siberian hamlet, has just beaten Comrade Gennady Sedikj, a 37-year-old physical education teacher, in an election for the post of first secretary. This tentative ex- periment in democracy, the first to take place in the Soviet Union since 1917, was, according to the newspaper Soviet Russia, the idea of Comrade Yermakov, regional party boss, taking his inspiration from Comrade Gorbachev. Only members of the central committee were allowed to vote, but the presence of two candidates on a ballot paper seems profoundly to have disturbed them. 'To tell the honest truth,' said Comrade Sedikj, who lost, 'I feel irrelevant. This is a really awful experi- ence.' (I should ring him up and tell him to cheer up. It isn't really all that bad.) I suspect the comrades do not know what they have let themselves in for. Before they know it, they will have to accommod- ate the competing claims of feminists, ethnic minorities, welfare claimants and gay-rights activists, and some of them will win elections. One morning soon, if Mr Gorbachev is not careful, he will wake up to discover that the place has been taken over by Bolsheviks. Russia may not be ready for it.

Iam by now heartily sick of elections. 'I am in this asylum because I am mad,' says the lunatic to the idiot who is visiting him, `and not because I am stupid.' This is the punch line to an elaborate Irish joke I have not got the space to explain. I suspect that either qualification, insanity or idiocy, will do very well to fix a man upon the ambition of a seat in the legislature. I can only thank my kindly neighbours in West Cork, who had me at their mercy, for not having sentenced me to four years in Dail Eireann. I thank also those who did vote for me, knowing that there is no such thing as a futile gesture in Ireland, and I thank the reader who sent me a £5 contribution fund. It was a fiver well spent.

Readers of some British newspap- ers,' says a piqued Irish Times, 'might be forgiven if they got the impression that, after the main party leaders, the most important personality in the election is Mr Stan Gebler Davies.' Readers of the prin- cipal Irish newspapers and the principal papers in Cork, though not of the Irish Times, which restricted itself to printing a silly photograph of me, have had the opportunity to hear my case. That was the point of the whole exercise.