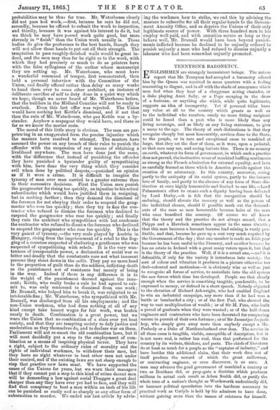 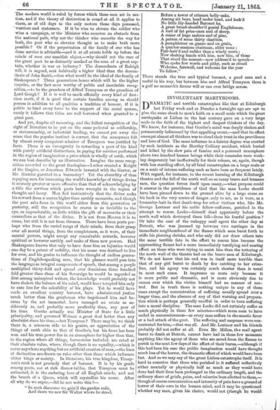 that Mr. Tennyson had accepted a baronetcy offered him by the Queen was received in some quarters with a feeling amounting to disgust, and in all with the shade of annoyance which men feel when they bear of a clergyman acting charades, or a duke playing Aunt Sally, or a Pope escaping in the dress of a footman, or anything else which, while quite legitimate, suggests an idea of incongruity. Yet if personal titles have any value at all to the country which grants as well as to the individual who receives, surely no more fitting recipient could be found than a poet who is more likely than any living sovereign, and as likely as any living statesman, to give a name to the age. The theory of such distinctions is that they recognize cheaply but most honourably, services done to the State, to the people, or in rare and exceptional cases to mankind at large, that they set the doer of them, as it were, upon a pedestal, so that men may see, and seeing imitate him. There is no country on earth, whatever its form of government, in which such a practice does not prevail, the instinctive sense of mankind baffling sentiments as strong as the French admiration for external equality, and laws as carefully framed as those which in America provide against the creation of an aristocracy. In this country, moreover, owing partly to the antiquity of its social system, partly to the intense love of family, and partly to the absence of any form of State dis- tinction at once highly honourable and limited to one life,—Lord Palmerston's effort to create such a dignity having been defeated by Lord Derby,—it is felt that the recognition should be enduring, should elevate the memory as well as the person of the individual chosen, should if possible mark out the descend- ants of the man as men honourable because heirs of the man who once benefited the country. Of course we all know that the theory and the practice do not always accord, that a Phipps and a Havelock sometimes appear in the same Gazette; that this man becomes a baronet because lead mining is vastly pro- fitable, and that, because he gave up a seat very much required by the Government of the day ; that one member is made an Irish peer because he has been useful to the Treasury, and another because he has an estate in Ireland with a great many voters upon it, but that is the theory of the practice. Well, if it is a sound one,—and it is defensible, if only for the variety it introduces into society, the sort of colour and vibration it produces in a picture otherwise too drab-coloured and motionless—it is obviously wise as well as just to recognize all forms of service, to assimilate into the old system the new forces which time has developed. People see that clearly enough when the service is something tangible, ponderable, to be expressed in money, or defined in a short speech. Nobody objected to the elevation of Richard Arkwright, who had enabled England to win an industrial campaign, any more than if he had won a battle or bombarded a city ; or of the first Peel, who showed the way to vast multiplication of wealth ; or of Sir M. Peto, who built a parcel of gunboats when they were wanted ; or of the half-dozen engineers and contractors who have been decorated for conquering nature in pursuit of their own fortunes ; or of Sir Jatnsetjee Jeejeeb- hoy, who simply gave away more than anybody except a Mr. Peabody or a Duke of Northumberland ever does. The service in all these casts is tangible, visible, susceptible of description, but it is not more real, is rather less real, than that performed for the country by its writers, thinkers, and poets. The chiefs of literature

do at least as much for a people as the "captains of industry," and have besides this additional claim, that their work does not of itself produce the reward of which the great millowner, or contracting engineer, or even discoverer, is so sure. A man may advance the good government of mankind a century or two as Bentham did, or prop.igate a doctrine which produces millions in actual cash result as Adam Smith did, or purify the whole tone of a nation's thought as Wordsworth undoubtedly did, or hammer political speculation into the hardness necessary to practical work as Carlyle is held by his admirers to have done, without gaining more than the means of existence for himself. The modern, world is ruled by forces which these men set in mo- tion, and if the theory of distinction is sound at all it applies to them, as of old days to the only motors those days possessed, 'warriors and statesmen. If it be wise to elevate the soldier who wins a campaign, or the Minister who removes an obstacle from the national path, why not the thinker who smooths the way for both, the poet who so elevates thought as to make both more possible ? Or if the perpetuation of the family of one who has done service is advisable—and it at all events holds up before the minds of men one unselfish object—why should not the race of the great poet be as distinctly marked as the sons of a great cap- tain, whether in war or industry ? The descendants of Raleigh will, it is argued, seek habitually a higher ideal than the descen- dants of John Smith,—but what would be the ideal of the family of Shakespeare? Three generations hence which will be the higher impulse, or the fact most worthy of public and inevitable recog- nition,—to be the grandson of Alfred Tennyson or the grandson of Lord Gough? If it is well to mark officially every kind of first- class merit, if it is good that certain families among us should possess in addition to all qualities a tradition of honour, if it is politic to bind every force to the support of the social system, surely it follows that titles are well bestowed when granted to a great poet.

And yet, despite all reasoning, and the fullest recognition of the right of literature to be put on the same pedestal as soldiership, or statesmanship, or industrial leading, we cannot put away the sense that the popular instinct is correct, that the annoyance felt by almost every competent admirer of Tennyson was justified by facts. There is an incongruity in rewarding a poet of his kind with purely artificial distinctions, in paying for services performed in the region of imagination a price which is wholly of earth, which we can best describe by an illustration. Imagine the same recog- nition accorded to the great theologian—Luther created a Knight of the Empire, or Jonathan Edwards invested with the Garter, or Mr. Maurice gazetted to a baronetcy ! Yet the absurdity of thus repaying men for increasing the world's knowledge of things divine is scarcely greater or more offensive than that of acknowledging by a title the services which poets have wrought in the region of thought and fancy. Men feel instinctively that the divine seeks his reward from a source higher than earthly monarchs, and though the poet asks fame in this world either from this generation or posterity, still the recognition he craves is as invisible to the eye, as imponderable, as little within the gift of monarchs or their counsellors as that of the divine. It is not from Heaven it is to come, but still it is not from thrones. There have been poets per- haps who from the varied range of their minds, from their grasp over all mortal things, from the completeness, as it were, of their mental powers, might accept any conceivable rewards, however spiritual or however earthly, and make of them new powers. Had Shakespeare known that only to have done him an injustice would • one day be a patent of nobility, that his name was destined to live for ever, and his genius to influence the thought of endless genera- tions of English-speaking men, that his phrases would pass into the language as integral components of speech, that among a people multiplied thirty-fold and spread over dominions three hundred fold greater than those of his Sovereign he would be regarded as first among uninspired writers, the knowledge would probably not have shaken the balance of his mind, would have tempted him only to care less for the saleability of his plays. Yet he would have made an excellent country baronet, have administered justice much better than the gentleman who imprisoned him and be- came by the act immortal, have managed an estate as as- siduously as, and probably more profitably than, any peer of his time. Goethe actually was Minister of State for a little principality, and governed Weimar a great deal better than any absolutist since his time,—but Tennyson? There may be, we think there is, a sensuous side to his genius, an appreciation of the things of earth akin to that of Goethe's, but his fame has been won and his true power lies in an atmosphere far higher than that, in the region where all things, baronetcies included, are rated at their absolute value, where, though there is no equality,—which is never anywhere anything but an artificial creation of man ,—the lines of distinction are drawn on rules other than those which influence either kings or society. In literature, his true kingdom, Tenny- son's rank is not precisely that of baronet. It is by his grade among poets, not at rich dinner.tables, that Tennyson must be estimated, it is the enduring love of all English minds, and not the breath of a Queen, which will crystallize his name. After all why do we argue,—did he not write this ?— " In such discourse we gain'd the garden rails, And there we saw Sir Walter where he stood, Before a tower of crimson holly-oaks, Among six boys, head under head, and look'd No lade lily-handed Baronet he, A great broad-shoulder'd genial Englishman, A lord Of fat prize-oxen and of sheep, A raiser of huge melons and of pine, A patron of some thirty charities, A pamphleteer on guano and on grain, A quarter-sessions chairman, abler none ; Fair-hair'd and redder than a windy morn ; Now shaking hands with him, now him, of those

Who spoke few words and pithy, such as closed Welcome, farewell, and welcome for the year To follow."

There stands the true and typical baronet, a good man and a useful in his way, but between him and Alfred Tennyson there is a gulf no monarch's favour will or can ever bridge across.