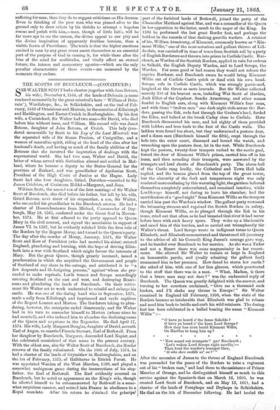 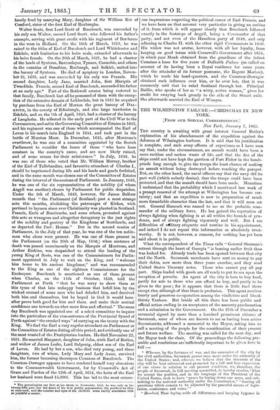 SIR WALTER SCOTT had a charter (together with Jane Betoun, his wife), December 4, 1544, of the lands of Delorain (a name rendered memorable by the great minstrel's hero "William of Delo- rain"), Wardishope, &c., in Selkirkshire, and on the 2nd of Feb- ruary, 1549 of Ormistoun and Murrois, in the counties of Edinburgh and Haddington, and Easter-Cruick in Roxburghshire. By his first wife, a Carmichael, Sir Walter had two sons—Sir David, who died before him without issue, and William. His second wife was Janet Betoun, daughter of John Betoun, of Creich. This lady (ren- dered memorable by Scott in his Lay of the Last Minstrel) was the separated wife of Sir Simon Preston, of Craiguillar, and a woman of masculine spirit, riding at the head of the clan after her husband's death, and having so much of the family abilities of the Betouns that she incurred the imputation of dealings with the supernatural world. She had two sons, Walter and David, the latter of whom served with distinction abroad and settled in Hol- land, where he became a deputy to the States-General for the province of Zealand, and was grandfather of Apolonius Scott, President of the High Court of Justice at the Hague. Lady Scott had also four daughters, Grizel, Dorothea—married to Sir James Crichton, of Craistoun Riddel—Margaret, and Jean.

• "'Now sound out trumpets!' quo' Buccleuch; Let's waken Lord Scrope right merle,'— Then loud the warder's trumpet blew, 0 wha dare meddle wi' me?'" After the accession of James to the throne of England Buccleuch was persuaded for the peace of the Borders to raise a regiment out of his " broken men," and lead them to the assistance of Prince Maurice of Orange, and he distinguished himself so much in this service against the Spaniards that on March 16, 1606, he was created Lord Scott of Buccleuch, and on May 13, 1611, had a charter of the lands of Fernyhope and Dryhope in Selkirkshire. He died on the 5th of December following. He had healed the

family feud by marrying Mary, daughter of Sir William Ker of Cessford, sister of the first Earl of Roxburghe.

Walter Scott, first Lord Scott of Buccleuch, was succeeded by his only son Walter, second Lord Scott, who followed his father's example, serving with great credit with his regiment of Borderers in the wars in Holland. On the 16th of March, 1619, he was raised to the titles of Earl of Buccleuch and Lord Whitchester and Bekaale, with limitation to his heirs male, extended afterwards to his heirs female. On the 20th of March, 1621, he had a charter of the lands of Syntoun, BaxtonlaysA Tynnes, Cannobie, and others in the counties of Dumfries, Roxburgh, and Selkirk, united into the barony of Syntoun. He died of apoplexy in London, Novem- ber 21, 1633, and was succeeded by his only son Francis. His second daughter, Lady Jane, married John, first Marquis of Tweeddale. Francis, second Earl of Buccleuch, succeeded his father at an early age.* Part of the Bothwell estates being restored to that family, Buccleuch lost all he possessed of them with the excep- tion of the extensive domain of Liddesdale, but in 1642 he acquired by purchase from the Earl of Morton the great barony of DAL- KEITH, in the county of Edinburgh, and also large territories in Eskdale, and on the 7th of April, 1643, had a charter of the barony of Langholm. He adhered in the early part of the Civil War to the Covenanters, and satin the Governing Committee of Estates in 1643, and his regiment was one of those which accompanied the Earl of Leven in his march into England in 1614, and took part in the battle of Marston Moor. In December, 1645, after Montrose's overthrow, he was one of a committee appointed by the Scotch Parliament to consider the losses of those "who have been constant in the country's cause, and are now likely ruined, and of some means for their subsistence." In July, 1646, he was one of those who voted that Mr. William Murray, brother of the Earl of Tullebardine, and favourite attendant of Charles I., should be imprisoned during life and his lands and goods forfeited, and in the same month was chosen one of the Committee of Estates daring the interval of the sessions of Parliament. In January, 1649, he was one of the six representatives of the nobility (of whom Argyll was another) chosen by Parliament for public despatches. Under the 9th of March, 1649, however, Sir James Balfour records that "the Parliament (of Scotland) past a most strange acte this monthe, abolishing the patronages of Kirkes, wich pertined to laymen since ever Christianity was planted in Scotland. Francis, Earle of Buccleuche, and some others, protested against this acte as wrangous and altogether derogatory to the just rights of the nobility and gentrey of the Kingdome of Scottlande, and so departed the Parl : Housse." But in the second session of Parliament, in the July of that year, he was one of the ten noble- men who alone were present. He was one of those present in the Parliament (on the 20th of May, 1650,) when sentence of death was passed unanimously on the Marquis of Montrose, and Arthur Erskine, was despatched to attend the landing of the young King of Scots, was one of the Commissioners for Parlia- ment appointed in July to wait on the King, and "welcome him home to his ancient kingdome," and was recommended to the King as one of the eighteen Commissioners for the Exchequer. Buccleuch is mentioned as one of those present when Charles, on the 11th of October, 1650, told the Parliament at Perth " that he was sorry to show them at this tyme of that late unhappy business that befell him by the wicked counsel of some men who had deluded him, and deceived both him and themselves, but he hoped in God it would here- after prove both good for him and them, and make their mutual confidence one towards another more firm and effectual." The same day Buccleuch was appointed one of a select committee to inquire into the particulars of the remonstrance of the Provincial Synod of Perth against "the crooked ways" of carrying on the treaty with the King. We find the Earl a very regular attendant on Parliament or the Committee of Estates duiing all this period, and evidently one of the most trusted of the Presbyterian leaders. He died November 22, 1651. He married Margaret, daughter of John, sixth Earl of Rothes, and widow of James Leslie, Lord Balgenig, eldest son of the Earl of Leven. He had by her a son, who died very young, and three daughters, two of whom, Lady Mary and Lady Anne, survived him, the former becoming thereupon Countess of Buccleuch. The Countess-Dowager appears to have rendered herself very obnoxious to the Commonwealth Government, for by Cromwell's Act of Grace and Pardon of the 12th of April, 1654, the heirs of the Earl her husband were fined 15,000/. This has led to the most errone-

* The genealogists say that at his death Ili November, 1651, he was only in his twenty.fifth year, but the dates of his that public appearances, the position he then at once took, and the number and ages of his children some hardly consistent with so youthful a career. ous impressions respecting the political career of Earl Francis, and we have been on that account very particular in giving an outline of it, from which it will appear clearly that Buccleuch followed exactly in the footsteps of Argyll, being a Covenanter of that party, and not even of the Hamilton party of 1648, and only adhering to Charles II. with the other rigid Covenanters in 1650. His widow was not averse, however, with all her loyalty, from keeping on good terms with Cromwell's Government after 1654, in which year Monk obtained from the guardians of the infant Countess a lease for five years of Dalkeith Palace (so called on account of its having been a Royal residence for some years after the attainder of its former possessor, the Regent Morton), which he made his head-quarters, and the Countess-Dowager obtained such influence over him, or he over her, that it was commonly said that he ruled Scotland through her. Principal Baillie, who speaks of her as "a witty, active woman," gives her credit for swaying back greatly to the side of the Stuart exile. She afterwards married the Earl of Wemyss.