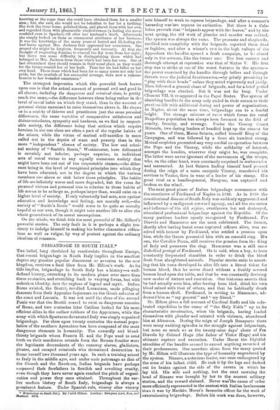 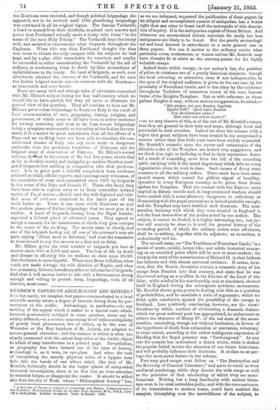 BRIGANDAGE IN SOUTH ITALY.* THE belief, long cherished by reactionists

throughout Europe, that recent brigandage in South Italy implies in the smallest degree any genuine popular discontent or aversion to the new kingdom, receives a final blow from Mr. Hilton's work. As its title implies, brigaudage in South Italy has a history—a well- defined history, extending in its modern phase over more than three centuries, and stretching back in varying forms, but with unbroken identity, into the regions of legend and myth. Before Rome existed, the Bruttii, revolted Lucanians, made pillaging descents from their Appenine fastnesses on the Greek colonies of the coast and amnia. It was not until the close of the second Punic war that the Bruttii ceased to exist as dangerous enemies of Rome, and two centuries later Catiline looked for his most efficient allies in the outlaw robbers of the Appeniues, while the army with which Spartacus devastated Italy was simply organized brigandage. For close upon twenty centuries the normal popu- lation of the southern Apenuines has been composed of the most dangerous elements in humanity. The cowardly and blood- thirsty brigands whom Francis IL and the Pope used to send forth on their murderous errands from the Roman frontier were the legitimate descendants of the runaway slaves, gladiators, pirates, and escaped criminals who threatened destruction to Rome herself two thousand years ago. In such a training school as Italy in the middle ages, and under such patronage as that of the Church and the Bourbons, Italian brigands have perhaps surpassed their forefathers in fiendish and revolting cruelty, even though they have never again reached the pitch of organi- zation and power they once attained. Throughout the ear- lier modern history of South Italy, brigandage is always a prominent feature. Under Spanish rule, viceroy after viceroy

• J3riganciage in South Itiey. By Parisi Hilton. London: Sampson Low, Son, aud Menton. 1804. sets himself to work to repress brigandage, and after a summer's harassing warfare reports its extinction. But there is a Cala- brian proverb that" brigands appear with the leaves," and by the next spring, the old work of plunder and murder was revived. The system was always the same. The peasants and shepherds, terrified into complicity with the brigands, reported them dead or fugitive, and after a winter's rest in the high valleys of the Appenines the bandits opened a fresh campaign, to b3 closed only in the autumn, like the former one. The first earnest and thorough attempt at repression was that of Sixtus V. His first step was to strike at one of the worst features in the system— the power exercised by the bandits through bribes and through threats over the judicial functionaries,—by grimly promising to "play with their heads" unless they acted vigorously and justly. Then followed a general chase of brigands, and for a brief period brigandage was checked. But it was not for long. Under Clement VII. it re-appeared in the Papal States. The system of absorbing bandits in the army only ended in their return to their previous life with additional daring and power of organization. In Naples, about the same time, brigandage ran to a fearful height. The strange mixture of races which forms the rural Neapolitan population has always been foremost in the field of cruelty, ferocity, and revenge. Under the Viceroy Count Miranda, two daring leaders of banditti kept up the contest for years. One of them, Marco Sciarra, called himself King of the Campagna, and was followed by a force six hundred strong. Mutual suspicion prevented any very cordial co-operation between the Pope and the Viceroy, while the solidarity of interest, amongst the bandits, wherever they might be, was complete. The latter were never ignorant of the movements oLi the troops, who, on the other hand, were constantly surprised in ambuscades and massacred. At last Sciarra finding himself hard pressed during the reign of a more energetic Viceroy, transferred his services to Venice, then in want of a leader of his stamp. His great rival as a bandit-general, Mangone, was captured and broken on the wheel.

The next great phase of Italian brigandage commences with the overthrow of Ferdinand of Naples in 1798. As in 1359 the constitutional disease of South Italy was suddenly aggravated and influenced by a malignant outward agency, and all the res3urces and influence of the old regime,. overthrown but not destroyed, stimulated professional brigandage against the Republic. Of the many partisan leaders openly recognized by Ferdinand, Frft Diavolo and Mammone are the most celebrated. The former, shortly after having burnt some captured officers alive, was re- ceived with honour by Ferdinand, who settled a pension upon him, while the Queen presented him with an emerald ring. His son, the Cavalier Pezza, still receives the pension from the King of Italy and possesses the ring. Marrenone was a still more diabolical protege of Ferdinand. He is said, when a boy, to have constantly frequented shambles in order to drink the blood fresh from slaughtered animals. Popular stories unite in assert- ing that his taste developed in after life into a literal thirst for human blood, that he never dined without a freshly severed human head upon the table, and that he was constantly devising new modes of torture and execution. One historian asserts that he had actually seen him, after having been bled, drink his own blood mixed with that of others, and that be habitually drank from a human skull. Ferdinand, in writing to Mammone, ad- dressed him as "my general" and " my friend."

Mr. Hilton gives a full account of Cardinal Ruffo and his cele- brated expedition in the cause of "the Holy Faith" up to its characteristic termination, when his brigands, having loaded themselves with plunder and satiated with violence, abandoned him at Altamura. During the reign of Joseph Bonaparte there were many exciting episodes in the struggle against brigandage, but none so much so as the twenty-nine days' chase of Fra Diavolo by Colonel Hugo (the father of Victor Hugo) and his ultimate capture and execution. Under Murat the frightful atrocities of the bandits seemed to exceed anything recorded of their predecessors. One anecdote alone from the many quoted by Mr. Hilton will illustrate the type of humanity engendered by the system. Bizzaro, a notorious leader, was once endangered by the cries of his infant child. He took it by the legs and dashed out its brains against the side of the cavern in which he lay bid. His wife said nothing, but the next morning the head of Bizzaro was brought by her to the nearest military "station, and the reward claimed.. Never was.the cause of 'order more efficiently represented in the contest with Italian lawlessness than it was by Manhas, Murat's favourite officer for tbe work of exterminating brigandage. Before his work was done, however,

the Bourbons were restored, and though political brigandage dis- appeared, not to be revived until 1800, plundering brigandage was continued in all its original vigour. The famous Vardarelli, a band so named from their chieftain, acquired such renown and power that Ferdinand actually made a treaty with them "in the name of the most Holy Trinity." The Vardarelli kept the treaty well, and assisted to exterminate other brigands throughout the Capitana. When this was done Ferdinand thought the time was come to violate the only compact with his subjects he had kept, and by a plan alike remarkable for treachery and cruelty he succeeded in either assassinating the Vardarelli by the aid of ruffians, or condemning them to death by false accusations of unfaithfulness to the treaty. No band of brigands, as such, ever afterwards attained the renown of the Vardarelli, and for once the Italian brigand stands out—in contrast with the Bourbon— as honourable and even heroic.

There are many wild and strange tales of adventure connected with Mr. Hilton's subject during the last half-century which we should like to have quoted, but they all serve to illustrate the general view of the question. They all combine to bear out Mr. Hilton's point—that brigandage in Southern Italy is the result of local characteristics of race, geography, history, religion, and government, of which some or all have been in active existence for twenty centuries, and that so far from recent brigandage being a symptom unfavourable to the safety of the Italian Govern- ment, it is a matter for great satisfaction that all the efforts of a Pope and an ex-King have not been able to stimulate the con- stitutional disease of Italy into any more acute or dangerous outbreaks than the predatory incursions of Chiavone and the brigand army of observation of nistany. Mr. Hilton's second volume, dedtted to the events of the last five years, shows that as far as fiendish cruelty and malignity go modern Bourbon-insti- gated brigands lose nothing in comparison with their predeces-

sors. It is in great part a faithful compilation from evidence

adduced at trials, official reports, and contemporary witnesses, of the enormities of every kind committed since 1860 by brigands iU the name of the Pope and Francis II. Those who fancy they have been able to explain away or to flatly contradict isolated stories of Papal warfare, should read the well-digested and veri-

fied mass of evidence contained in the latter part of the work before us. There is one story which illustrates so well

the modern phase of Italian brigandage that we must give it in outline. A band of brigands, issuing from the Papal frontier, captured a Liberal priest of advanced years. They agreed to accept a ransom, for the instalments of which they gave receipts in the name of the ex-King. The money came in slowly, and one of the brigands having cut off one of his prisoner's ears ate part, saying "Priest meat is delicious," and sent the remainder to those bound to pay the ransom as a hint not to delay.

Mr. Hilton gives the total number of brigands put hors de combat since 1860 at 7,000 and more. The loss of life by death and disease in effecting this he reckons at close upon 10,000. But the future is more hopeful. When once Rome is Italian, when roads are made through the wild districts of Naples, and when the peasantry, hitherto hereditary allies or tributaries of brigands, find that it will answer better to side with a Government strong enough and willing to protect them, brigandage, with all its horrors, must cease.