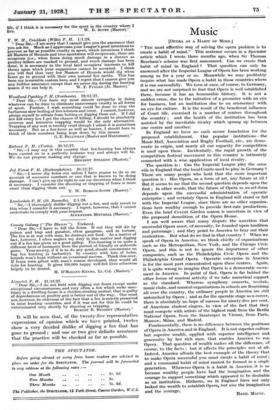 "THE most effective way of solving the opera problem is to create a habit of mind." This sentence occurs in a Spectator article which I wrote three months ago, when Sir Thomas Beecham's scheme was first announced. Can we create that habit of mind in England ? That question can only be answered after the Imperial League of Opera has been working among us for a year or so. Meanwhile we may profitably inquire -what has made Opera a habit in those countries where it is rim successfully. We turn at once, of course, to Germany, and we are not surprised to find that Opera is well established there, because it has an honourable history. It is not a sudden craze, due to the initiative of a promoter with an eye for business, but an institution due to an aristocracy with an eye for culture. It is the result of the beneficent influence of Court life, exercised in a number of centres throughout the country ; and the health of the institution has been assisted by the inevitable rivalry which sprang up between one centre and another.

In England we have no such secure foundation for the proposed establishment. Our popular institutions—the Music Hall, Association and Rugby Football, etc., are demo- cratic in origin, and nearly all our capacity for competition is used upon these. Incidentally, the rapid growth of the competition festival movement in this country is intimately connected with a wise application of local rivalry.

The question is : Can the Imperial League play the same role in England that the local Courts used to play in Germany? There are many people who hold that the more important question is : Has Opera, as a form of art, any future at all ? But it seems to me that the second question depends upon the first ; in other words, that the future of Opera as an art-form depends upon the successful administration of operatic enterprise ; and certainly Opera in England will stand or fall with the Imperial League, since there are no other organiza- tions here wealthy enough to provide first-rate productions. Even the brief Covent Garden season is uncertain in view of the proposed demolition of the Opera House.

I am well aware that many dispute the assertion that successful Opera must, of necessity, be founded upon tradition and patronage ; and they point to America to bear out their contention. But what do we find in that country ? When we speak of Opera in America, we think chiefly of organizations such as the Metropolitan, New York, and the Chicago Civic Opera, and this is not to ignore the importance of other companies, such as the Philadelphia Civic Opera and the Philadelphia Grand Opera. Operatic enterprise in America is for the most part concentrated upon these centres. Again, it is quite wrong to imagine that Opera is a democratic move- ment in America. In point of fact, Opera is far behind the other forms of musical activity if we take numerical support as the standard. Whereas symphony concerts, recitals, music clubs, and musical organizations in schools are flourishing all over the country, the ordinary people in America are still untouched by Opera ; and as for the operatic stage as a career, there is absolutely no hope of success for ninety-five per cent. of American student singers, in view of the fact that they must compete with artists of the highest rank from the Berlin National Opera, from the Staatsoper in Vienna, from Paris, Moscow, Milan, and Madrid.

Fundamentally, there is no difference between the positions of Opera in America and in England. It is not superior culture but superior wealth, applied with superior intelligence and generosity by her rich men, that enables America to run Opera. That question of wealth makes all the difference, of course, to the facts ; but it affects the principles not at all. Indeed, America affords the best example of the theory that to make Opera successful you must create a habit of mind ; and a communal habit of mind cannot be formed in a single generation. Wherever Opera is a habit in America, it is so because wealthy people have had the imagination and the courage to support something which appeared to be desirable as an institution. Hitherto, we in England have not only Jacked the wealth to establish Opera, but also the imagination and the courage.