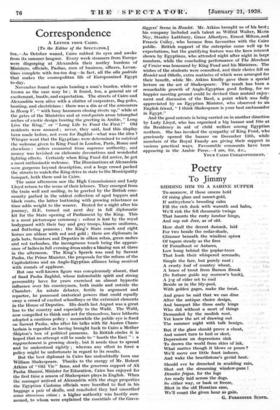 A LETTER FROM CAIRO.

[To the Editor of the SPECTATOR.], SIR,—As October waned, Cairo rubbed its eyes and awoke from its summer languor. Every week steamers from Europe were disgorging at Alexandria their motley burdens of Ministers, officials, Pashas, men of business, officers, Levan- tines :complete with tou-tou dog—in fact, all the olla podrida that makes the cosmopolitan life of Europeanized Egypt to-day.

November found us again bearing a man's burden, white or brown as the case may be ; it found, too, a general air of excitement, bustle, and expectation. The streets of Cairo and Alexandria were alive with a clutter of carpenters, flag-poles, bunting, and electricians : there was a din as of the armourers in Henry V. "with busy bummers closing rivets up," while at the gates of the Ministries and at rend-points arose triumphal arches of exotic design bearing the greeting in Arabic, " Long Live the king," or "Long Life to Fuad the First !" Old residents were amazed ; neer, they said, had this display been made before, not even for Zaghlul—what was the _idea ? Whisper went that the Egyptian 3 were determined to outrival the welcome given to King Fuad in London, Paris,.Rome.and elsewhere : orders emanated from supreme authority,, and money was lavished on elaborate decorations and wonderful lighting effects. Certainly when King Fuad did arrive, he got a most. enthusiastic welcome. The illuminations at Alexandria were gorgeous beyond description, and a huge crowd packed the Streets to watch the King drive in state to the Municipality

banquet, both there and in Cairo. ,

The same afternoon saw the High Commissioner and Lady Lloyd return to the scene of their labours. They emerged from the train well and smiling, to be greeted by the British com- munity garbed in the oddest collection. of aged toppers and black coati,' the 'latter buttoning with growing reluctance as time adds weight to the wearer. Rested for a night after his journey, H.E. turned out next day in full diplomatic kit for the State opening of Parliament by the King. This is 'a most picturesque ceremony colour is lent by the royal bodyguard with their bay and grey troops, bizarre uniforms, and fluttering pennons ; the King's State coach and eight horses are ablaze with red and gold ; there are diplomats in gala hats, Senators and Deputies in silken robes, green sashes and red tarbushes, the incongruous touch being the appear- ance of ladies in full evening dress under a blazing sun at three in the afternoon. The King's Speech was read by Sarwat Pasha, the Prime Minister, the proposals for the reform of the CaPitulatiOns and an Anglo-Egyptian affiance being received !With rounds of applause.

But one well-known figure was conspicuously absent, that of Saad Pasha Zaghlul, whose indomitable spirit and strong personality have for years exercised an almost hypnotic influence over his countrymen, both inside and outside the Chamber. An astute debater, fertile in argument and repartee, he possessed Oratorical pOivers that could equally sway a crowd of excited schoolboys or the extremist elements in the House of Deputies. His death last August was a great foss to the country and especially to the Wafd. The Wafd, now compelled to think and act for themselves, have hitherto adopted a cautious policy : meanwhile the public eye is fixed On "Sailiat Pasha, who after his talks with Sir Austen Cham- berlain is regarded as having brought back to Cairo a Mother Shipton's box of political panaceas. In British circles it is hoped that no attempt will be made to "hustle the East " : a rapprochement is growing slowly, but it needs time to spread and be understood rightly whereas any effort to force a policy might be unfortunate in regard to its results.

.. But the best diplomat in Cairo has undoubtedly been one William Shakespeare. Thanks to the energy Of Mr. Robert Atkins of "Old Vie" fame, and the generous support of All Pasha Shanisi, Minister for Education, Cairo has enjoyed for the first time a season of Shakespeare plays in English. When the manager arrived at Alexandria with the stage properties the Egyptian Customs Officials were -horrified to find in his baggage S -pair of skills, and concluded they litaa unearthed some atrocious crime; a higher authority was hastily sum- moned, to whom were explained the essentials of the Grave-

diggers' Scene in Hamlet. _ Mr. Atkins brought us of his best ; his company included such talent as Wilfrid Walter, Marie Ney, Stanley Lathbury, Grace Allardyee, Ernest Milton, and Francis Culley, who became firm favourites with the Cairo public. British support of the enterprise came well up to expectations, but the gratifying feature was the keen interest shown by Egyptians, who attended night after night in large numbers, while the concluding performance of The Merchant of Venice was honoured by King Fuad and his Ministers. The wishes of the students were consulted, and their choice fell on Hamlet and Othello, extra matinees of which were arranged for their benefit, while Mr. Atkins kindly gave them a special lecture on the art of Shakespeare. . The result has been a remarkable growth of Anglo-Egyptian good feeling, for no happier meeting ground could be devised than mutual enjoy- ment and discussion of the Bard, a point which was fully appreciated by an Egyptian Minister, who observed-to nn English friend, " I think Shakespeare is your best ambassador in Egypt."

! - And the good entente is being carried on in another direction by Lady. Lloyd; who has organized a big bazaar and fine at the Residency in aid of child- welfare among Egyptian mothers. She has invoked the sympathy of King Fuad, who graciously opened the bazaar on December 15th, while members of the Royal Family are giving their support in various practical .ways. Favourable comments 'have been appearing in the Arabic Press.—I am, Sir, &c.,