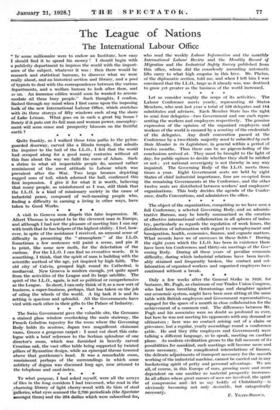 Let us consider roughly the scope of its activities. The

Labour Conference meets yearly, representing 43 States Members, who sent last year a total of 189 delegates and 184 substitutes and advisers. Each Member State has the right to send four delegates—two Government and one each repre- senting the workers and employers respectively. The genuine expression of the opinion of the organized employers and workers of the world is ensured by a scrutiny of the credentials of the delegates. Any draft convention passed at the Conference by a two-thirds majority must be submitted by each State Member to its Legislature, in general within a period of twelve months. Thus there can be no pigeon-holing of the conclusions arrived at. They must be brought to the light of day, for public opinon to decide whether they shall be ratified or not ; yet national sovereignty is not thereby in any way impaired. The Governing Body of the I.L.O. meets three times a year. Eight Government seats are held by eight States of chief industrial importance, four are co-opted from the remaining Governments at the Conference, and the other twelve seats are distributed between workers' and employers' organizations. This body decides the agenda of the Confer- ence, drafts Conventions, and administers the office.