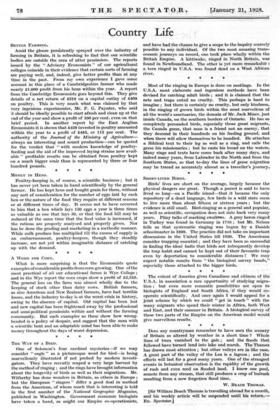 Page 14, 21 January 1928 — The extent of America gives Canadians and citizens of the
Close

The extent of America gives Canadians and citizens of the

U.S.A. in association a rare opportunity of studying migra- tion ; but even more romantic possibilities are open to biologists of England and South 'Africa, if they would co- operate scientifically. And once again I would appeal for a joint scheme by which we could get in touch" with the many migrants who spend their winter in Africa, both West and East, and their summer in Britain. A biological survey Of these two parts of the Empire on the American model would give marvellous results.