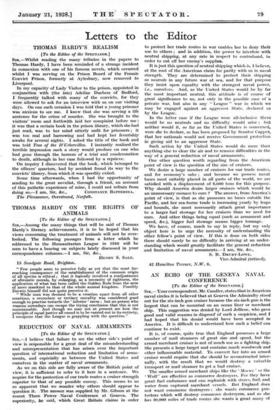 THOMAS HARDY ON THE RIGHTS OF ANIMALS [To the Editor

Sm,—Among the many things that will be said of Thomas Hardy's literary achievements, it is to be hoped that his views concerning the treatment of animals will not be over- looked. The following passages from a letter which he addressed to the Humanitarian League in 1910 will be seen to have a bearing on subjects lately discussed in your correspondence columns.—! am, Sir, &c.,

"Few people seem to perceive fully as yet that the most far- reaching consequence of the establishment of the common origin of all species is ethical ; that it logically involved a readjustment of altruistic morals, by enlarging, as a necessity of rightness, the application of what has been called the Golden Rule from the area of mere mankind to that of the whole animal kingdom. Possibly Darwin himself did not quite perceive it. " While man was deemed to be a creation apart from all other creations, a secondary or tertiary morality was considered good enough to practise towards the inferior ' races ; but no person who reasons nowadays can escape the trying conclusion that this is not maintainable. And though we may not at present see how the principle of equal justice all round is to be carried out in it entirety, I -recognize that the League is grappling with the question."