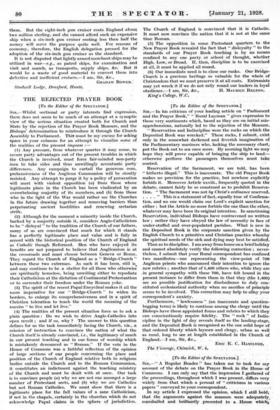 Sm,—In his criticism of your leading article on "Parliament and the Prayer Book," "Rural Layman " gives expression to those very sentiments which, based as they are on initial mis- apprehensions, naturally led to the rejection of the Measure.

"Reservation and Indiscipline were the rocks on which the Deposited Book was wrecked." These rocks, I submit, exist only in the somewhat darkened and feverish imagination of the Parliamentary mariners who, lacking the necessary chart; put the Book out to sea once more. By morning light we may hope they will prove capable of bringing the ship to land— otherwise perforce the passengers themselves must take control.

Reservation of the Sacrament, we are told, • has been "hitherto illegal." This is inaccurate. The old Prayer Book makes no provision for the practice, but nowhere explicitly forbids it. Moreover Article xxviii., frequently quoted in the debate, cannot fairly be so construed as to prohibit Reserva- tion. "The Sacrament was not by Christ's ordinance reserved. . . . . " This is a statement of fact, equally true of Confirma- tion, and no one would claim our Lord's explicit sanction for either ; but the Article no more forbids the one than the other, whatever may have been its original intention. In sanctioning Reservation, individual Bishops have contravened no written law ; rather they have obeyed the law of necessity in face of under-staffed and over-populated parishes. What is new in the Deposited Book is the corporate sanction given by the English Church to a primitive and Christian practice whereby the spiritual needs of the sick and dying may best be satisfied.

Then as to discipline. I am away from home on a brief holiday and cannot absolutely verify the following correction ; never- theless, I submit that your Rural correspondent has confused two manifestos—one representing the view-point of 700 Anglican priests who announced their intention to ignore the , new rubrics ; another that of 1,400 others who, while they are in general sympathy with these 700, have felt bound in the present instance to differ from them in that they, (the 1,400) see no possible justification for disobedience to duly con- stituted ecclesiastical authority when no sacrifice of principle seems to be involved. This correction may help to allay your

. Furthermore, " lawlessness " (an inaccurate and question- begging term) is likely to continue among the clergy until the Bishops have those appointed forms and rubrics to which they can conscientiously require fidelity. The " rock " of Indiri- cipline in the light of day reveals itself as the landing-stage, and the Deposited. Book is recognized as the one solid hope -of that ordered liberty which laymen and clergy, urban as well as rural, long to see at length established" in the Church of