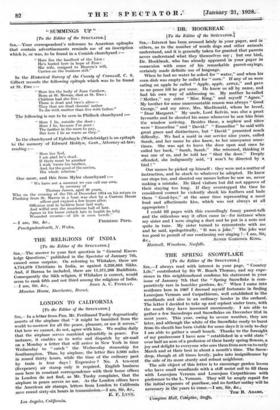 [To the Editor Of the SkitTArOn..]

Sra,—Interest has been aroused lately in your paper, and in others, as to the number of words dogs and other animals understand, and it is generally taken for granted that parrots never understand what they themselves say ; but our bird, Dr. Hookbeak, who has already appeared in your paper in connexion with _some. of his _remarkable parrot-sayings, certainly made definite use of language.

When he had no water he asked for "water," and when his corn dish was empty he called for "corn." If any of us were eating an apple he called "Apple, apple, APPLE," and gave us no peace till he got some.. He knew us all by name, and had his own way of addressing us. My mother he called Mother," my sister. "Miss King," and myself "Agnes." My brother for some unaccountable reason was always" Good George," and my niece, Mrs. MacDonald, whom he loved; , "Dear Margaret." My uncle, Lord Kelvin, was also a 'great favourite and he shouted his name whenever he saw hini.froin t'ie. window arriving. Besides these, a nephew and nitee: were " Emmeline." and ". David." "Emmeline" he said'with great grace and distinetriess, but " David " presented much difficulty. We had a maid in oar serVice nine years, called Sarah, and her name he also knew, to her annoyance. some-!' times. She was apt to leave the door open and once he called her back, "Sarah, Sarah." She returned, thinking it was One of us, and he told her "Shut the door." Deeply. offended, she indignantly said, "I won't be directed by a

bird ! " . . Our names he picked up himself : they were not a Matter Of instruction, and he stuck to whatever* adopted. He kite* our steps too, and shouted our names before he saw us, never making a mistake. He, liked visitors but did not approve of their staying too long.. If they overstepped, the time he considered correct he violently shook his feathers and bade them "Good-bye," at the same time representing a most' loud, and affectionate kiss, which was not always at all appropriate !

I could fill pages with this exceedingly fanny parrot-talk and the ridiculous way it often' came infini• iaktande when my sister and I were singing a dad and he put in a note Ian' quite in tune lily sister turned to remonstrate with me and he Said, apologetically, " It was a joke." The joke was too good to permit of our continuing our singing !..1 am, Sir; AGNES GARDNER KING. Hanna', Wroxhani, Norfolk.