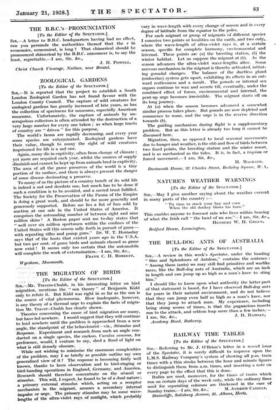 THE MIGRATION OF BIRDS - [To the Editor of the

SPECTATOR.] Siit,–;-/gr. Travers-Chubb, . in his interesting letter on bird migration, _mentions the "sun _theory ", of Benjamin Kidd only, to, refute it. But Kind was right in so far as the sun is the .source of vital phenomena. How inadequate, however, is any theory of a thermal urge to explain the facts of migra- tion Mr. Travers-Chubb has clearly shown.

Theories concerning the cause of bird migration are many, but have led nowhere. I would suggest that they will continue to lead nowhere until the problem is approached from a new angle, the standpoint of the behaviourist—viz., Stimulus and Response. Experiment and research from such an angle con- ducted on a single species, the cuckoo, Cucklus canorus, for preference, would, I venture to say, Shed a flood of light on what is still densely obscure.

While- not wishing to minimize the enormous complexities of the problem, may I as briefly as possible outline my own generalized view- of it ? The response is becoming fairly Well known, thanks to keen observation and to bird-ringing, or bird-banding operations in England, Germany, and America. Research should therefore concentrate on the stimuli or stimulus. This will, I expect, be found to be of a dual nature ; a primary external. stimulus which, acting on _a receptor mechanism in the migrant, arouses a secondary internal impulse or urge. The primary stimulus may be some wave- lengths of the ultra-violet rays. of smilight, which probably

vary in wave-length with every change of season and in every degree of latitude from the equator to the poles.

For each migrant or group of migrants of different species I conceive two points or localities on the earth, and two only,. where the wave-length of ultra-violet rays is, at a certain season, specific for complete harmony, environmental and internal. These points arc (a). the breeding station, (b) the winter habitat. Let us suppose the migrant at (b). As the season advances the ultra-violet wave-lengths alter. Some nervous mechanism in the migrant is thereby activated, initiat- ing gonadal changes. The balance of the ductless gland (endocrine) system gets upset, exhibiting its effects in an out- ward restlessness and a moult. The gonads or interns/ sex organs continue to wax and secrete till, eventually, under the combined effect of forces, environmental and internal, the pent-up urge becomes irresistible. The migrant starts off on its long journey.

At (a) when the season becomes advanced a somewhat similar process takes place. But gonads are now depleted and commence to wane, and the urge is in the reverse direction towards (b).

The guiding mechanism during flight is a supplementary problem. But as this letter is already too long it cannot be discussed here.

Migration, then, as opposed to local seasonal movements due to hunger and weather, is the ebb and flow of birds between two fixed points, the breeding station and the winter resort, and is as mechanical as the tides. It is, in fact, a tropism or forced movement. am, Sir, &c., H. MAGRATII.