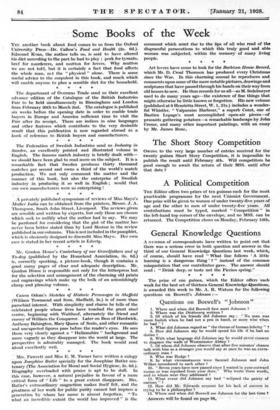 and Sons, Sheffield, 3s.) is of more than parochial-interest. With simplicity and charm he tells of the celebrated people whose lives have touched the great steel centre, beginning with Waltheof, alternately the friend and enemy of William the Conqueror. Later on Bess of Hardwick, Anthony Babington, Mary Queen of Scots, and other romantic and unexpected figures pass before the reader's eyes. He sees them very clearly against a " Hallarnshire " background and more vaguely as they disappear into the world at large. The perspective is admirably managed. The book would read aloud excellently well.