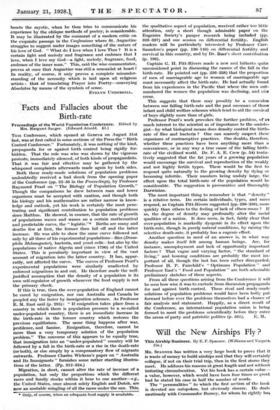 Facts and Fallacies about the Birth-rate

Proceedings of the World Population Conference. Edited by Mrs. Margaret Sanger. (Edward Arnold. El.) This Conference, which opened at Geneva on August 81st last, was at first called in some sections of the Press the" Birth Control Conference." Fortunately, it was nothing of the kind, propaganda for or against birth control being rigidly for- bidden. That the rule was wise was shown by the vigorous protests, immediately silenced, of both kinds of propagandists. That it was fair and effective may be gathered by the whispered complaints afterwards made again by both sides.

Both these ready-made solutions of population problems undoubtedly received a bad shock from the opening paper of the Conference (pp. 22-58 in the Proceedings), by Professor Raymond Pearl on "The Biology of Population Growth." Though the comparisons he drew between man and lower organisms must be accepted with caution, and though both his biology and his mathematics• are rather narrow in know- ledge and outlook, yet his work is certainly the most pene- trating and significant contribution to population problems since Malthus. He showed, in essence, that the rate of growth of populations waxes and wanes on a certain mathematical and predictable curve, the "logistic."* Births are many and deaths few at first, the former then fall off and the latter increase. He was able to show the same curve followed not only by all three of his experimental populations—flies (Droso- phila Melanogaster), bacteria, and yeast cells—but also by the populations of native Algeria and (since 1790) of the United States. This is peculiarly important in view of the vast amount of migration into the latter country. It has, appar- ently, not affected the curve. The curves of Professor Pearl's experimental populations were similarly unaffected by enforced migrations in and out. He therefore made the well- justified assumption that the density of a population is its own self-regulator of growth whenever the food supply is not the primary check.

If this is true, then the over-population of England cannot be cured by emigration, nor can Australia and Canada be peopled any the faster by immigration schemes. As Professor E. M. East said (p. 295): "If emigration takes place from a country in which there is population pressure to a so-called under-populated country, there is an immediate increase in the birth-rate in the former country which restores the previous equilibrium. The same thing happens after war, pestilence, and famine. Emigration, therefore, cannot be more than a very temporary solution of the population problem." The converse of this appears to be equally true, that immigration into an "under-populated" country will be followed by a fall in the birth-rate or a rise in the death-rate (or both), or else simply by a compensatory flow of migrants outwards. Professor Charles Wickens's paper on" Australia and Its Immigrants " furnishes some rather startling illustra- tions of the latter. (Pp. 812-824.) Migration, in short, cannot alter the rate of increase of a population, but only the proportions which the different races and family stocks within it bear to one another--e.g., the United States, once almost solely English and Dutch, are now an unstable mingling of all the races under the sun. This,

* Only, of course, when an adequate food supply is available.

the qualitative aspect of population, received rather too little attention, only a short though admirable paper on the Eugenics Society's pauper research being included (pp. 326-887) and one session on differential fertility. English readers will be particularly interested by Professor Carr- Saunders's paper (pp. 180-148) on differential fertility and survival in this country, and by Dr. Buer's short contribution (p. 198).

Captain G. H. Pitt-Rivers made a new and hitherto quite unconsidered point in discussing the causes of the fall in the birth-rate. He pointed out (pp. 286-288) that the proportion of men of marriageable age to women of marriageable age must necessarily affect the birth-rate. He had actually found from his experiences in the Pacific that where the men out- numbered the women the population was declining, and vice versa.

This suggests that there may possibly be a connexion between our falling birth-rate and the past successes of those infant and child welfare schemes which tend to aid the survival of boys slightly more than of girls.

Professor Pearl's work provokes the further problem, of as much interest to the scientist as of importance to the sociolo- gist—by what biological means does density control the birth- rate of flies and bacteria ? One can scarcely suspect these organisms of contraceptive practices. One doubts, therefore, whether these practices have been anything more than a convenience, or in any way a true cause of the falling birth- rate of the civilized world. Dr. F. A. E. Crew (p. 54) tenta- tively suggested that the fat years of a growing population would encourage the survival and reproduction of the weakly and not highly fertile types. These would be the first to respond quite naturally to the growing density by dying or becoming infertile. Their numbers being unduly large, the effect upon the total birth-rate of the population would be considerable. The suggestion is provocative and thoroughly Darwinian.

The most important thing to remember is that "density" is a relative term. Do certain individuals, types, and races respond, as Captain Pitt-Rivers suggested (pp. 286-288), more quickly than others to the feeling of lack of elbow-room ? If so, the degree of density may profoundly alter the racial qualities of a nation. It does seem, in fact, fairly clear that over-population is markedly dysgenic in its effect upon the birth-rate, though in purely natural conditions, by raising the selective death-rate, it probably has a eugenic effect.

Another question in need of an answer is, in what way density makes itself felt among human beings. Are, for instance, unemployment and lack of opportunity important factors ? That vague and varying factor, "the standard of living," and housing conditions are probably the most im- portant of all, though the last has been rather disregarded. Professor H. P. Fairchild's "Optimum Population" and Professor East's "Food and Population" are both admirable preliminary sketches of these aspects.

From all these questions arising from the Conference it will be seen how wise it was to exclude from discussion propaganda for and against birth control. These rival and ready-made solutions of population problems would have been hotly put forward before ever the problems themselves had a chance of fair analysis and statement. Happily, as a direct result of the Conference, an international population union is being formed to meet the problems scientifically before they enter the arena of party and patriotic politics (p. 861). E. M.