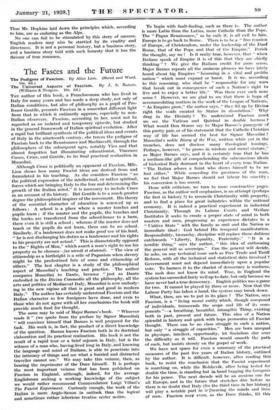 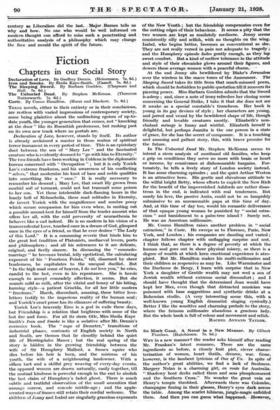 The Fasces and the Future

The Universal Aspects of Fascism. By J. S. Barnes. & Norgate. 10s. .6d.) THE author of this book, a Frenchwoman who has lived in Italy for many years and has made a deep study, not only of Italian conditions, but Also of philosophy as a pupil of Pro- fessor Gentile, presents Fascism in a somewhat different light from that in which it ordinarily appears, especially to non- Italian ObServers. Fascism, according to her must not be regarded as an isolated and temporary episode; but studied in the general framework of Italian spiritual evolution. After a rapid but brilliant synthesis Of the political ideas and events of Italy in the nineteenth century, she traces the pedigree of Fascism baek to the Renaissance and Machiavelli; through the philosophers of the subsequent ages notably -Vico and that almost forgotten but illuminating educationist, Vincenzo Cuoco, Croce; and Gentile, to its final practical realization in

. Although Croce is politically an opponent of Fascism, Mlle. Lion shows how many Fascist ideas are derived from and f&mulated in his teaching. As she considers Fascism "as the political expression of the intellectual, Or rather spiritual, forces which are bringing Italy to the fore and determining the growth of the Italian mind," it is necessary to include Croce in an account of its history. But Gentile is to a much greater degree the philosophical inspirer of the movement. His theory of the essential character of education is summed up as follows : . A school is a place where a master teaches and pupils learn ; if the master and the pupils, the benches and the books, are transferred from the school-house to a barn, there even it is still a school ; whereas if the master does not teach or the pupils do not learn, there can be no school. Similarly, if a landowner does not make good use of his land, "he is not discharging his duties as a landowner and his rights to his property are not actual." This is diametrically opposed to the "Rights of Man," which assert a man's right to use his property as he chooses—jus utendi et abutendi. "The view of Citizenship as a birthright is a relic of Paganism when slavery rnight be the predestined fate of some and citizenship of others." The last chapter is a study of the philosophical aspect . of Mussolini's teaching and practice. The author compares Mussolini to Dante, because "just as Dante embodied in the Diana Commedia all the philosophy, all the arts and politics of Mediaeval Italy, Mussolini is now embody- ing in the new regime all that is great and good in modern Italy." The author has certainly understood Fascism and the Italian character as few foreigners have done, and even to those who do not agree with all her conclusicins the book will provide much food for thought.

The same may be said of Major Barnes's book. "Whoever reads it" (we quote from the preface by Signor Mussolini) "will convince himself that Barnes is well prepared for the task. His work is, in fact, the product of a direct knowledge of the question. Barnes knows Fascism both in its doctrinal elaboration and its practical realization. His book i4 not the result of a tepid tour or a brief sojourn in Italy, but is the witness of a man Who; having lived long in Italy; and knowing the language and mind of Italians, is able to penetrate into the intimacy of things and see what a hurried and distracted traveller cannot see." We may take this Volume, then, as bearing the imprimatur of the Duce himself. It is perhaps the most important volume that has been published on Fascism in England, although; indeed, for the average Englishman seeking a working knowledge of the subject we would rather recommend Commendatore Luigi Villari's The Fascist Experiment. Curiously enough, the work of the Italian is More , Anglo-Saxon . in outlook than the logical and sometimes rather laborious treatise under notice, . To begin with fault-finding, such as there is. The author is more Latin than the Latins, more Catholic than the Pope.

The "Pagan Renaissance," as he calls it, is all evil to him.

Europe is to go back to Rome. There is to be a "free reunion• of Europe, of Christendom, under the leadership of the Dual

Rome, that of the Pope and that of the Empire." Perish the thought, say we ! Is it really true, however, that "when Italians speak of Empire it is of this that they are chiefly thinking " ? We give the Italians credit for more sense.

Major Barnes repeats all the ominous phrases we have lately heard about big Empires "hemming in. a vital and prolific nation" which must expand or burst. It is we, according to this reasoning, who. shall be "responsible for any wars that break out in consequence of such a Nation's right to live and to enjoy a better life." Was there ever such non- sense ? However, we are glad to see that there is hope of, accommodating matters in the work of the League of Nation's., "As Empires grow," the author says, "they fill up by Divine right the voids created by States in dissolution." Why drag in the Divinity ? To understand Fascism must

we see the Vatican and Quirinal in double harness ? What would Don Sturzo say to Major Barnes's panegyric of this pretty pair, or of his statement that the Catholic Christian way. of life has seemed the best for Signor Mussolini? Mussolini's noble Diary of the War, written while yet in the trenches, does not disclose many theological leanings. Perhaps, however, "lie grows in wisdom and moral stature," as Major Barnes says, and it is certainly true that he has a medium-like gift of comprehending the subconscious ideals of historical Italy dormant in the heart of every true Italian. "The Italian adores a Saint who shows himself to be no fool either." While conceding the greatness of the man, we feel that Major Barnes should not labour his sanctitY ; his conversion is too recent.

Done with criticism, we turn to more constructive pages. Fascism, as the author well emphasizes, is an attempt (perhaps the first in history ?) to reconcile Christianity -with property; and to find a place for great industries within the !lath:mai economy. It is indeed a practical experiment in industrial Christianity. Through its Labour Courts and Welfare Institutes it seeks to create a proper state of mind in both masters and men, progressing as experience dictates to a "Unitive State" with the family as unit and the Nation as immediate ideal : God behind His temporal manifestation. Responsibility, hierarchy, discipline Will replace those dubious c,atehWords "Liberty, Equality, Fraternity." "It is a terrible thing," says the author, "this idea of enthroning the general will as sovereign." Can the general will decide, he asks, on any technical issue such as Free Trade and Tariff Reform, with all the technical and statistical data involved ? Government must not depend immediately upon a popular vote. To harness it to the chariot of democracy is madness. The mob does not know its mind. True, in England the system has succeeded fairly well up to date, but only because we have never had a true democracy. English polities was a game for two. It cannot be played by three or more. Now that the Labour Party has taken a hand, the system may break down.

What, then, are we to put in its place?. The Nation, says Fascism, is a "living moral entity which, though composed of individuals, transcends the scope and life of its com- ponents "—a breathing, beautiful, intangible Thing, existing both in past, present and future. This idea of a Nation splendid in history and quick with hope permeates all Fascist thought. There can be no class struggle in such a nation, but only "a struggle of capacities." Men are born unequal in physique, intellect, opportunity, let Socialism slur over the difficulty as it will. Fascism would smooth the path of each, but insists sternly on the gospel of work.

We have not space for even a summary of the practical measures of the past five years of Italian history, outlined by the author. It is difficult, however, after reading this book, to resist the conclusion that the Fascist experiment is marching on, while the Bolshevik, after being tested for double the time, is standing hat in hand begging the bourgeois for his pence. The next decade will be an anxious one for all Europe, and in the future that stretches dim before us

there is no doubt that Italy (for the third time in her history) will play a notable part in irc'uencing the minds and lives Of men._ Fascism may even, as the Duce thinks, fill this

Century as Liberalism did the last. Major Barnes tells us why and bow. No one who would be well informed on modem thought can afford to miss such a penetrating and authoritative analysis of a philosophy which may change the face and mould the spirit of the future.