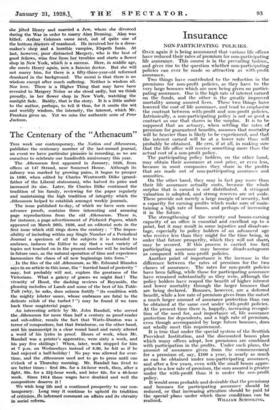 ONCE again it is being announced that various life offices have reduced their rates of premium for non-participating life assurance. This course is in the prevailing fashion, and gives riie to the qUestion whether non-participating policies can ever be made so attractive as with-profit assurance.

Two things have contributed to the reduction in the premiums for non-profit policies, as they have to the very large bonuses which are now being given on partici- pating assurance. One is the high rate of interest earned on the - funds, and the other is the greatly improved mortality among assured lives. These two things have lowered the cost of life assurance, and tend to emphasize the contrast between with-profit and non-profit policies.

Intrinsically, a non-participating policy is not so good a contract as one that shares in the surplus. It is to be supposed that an actuary, when settling the rates of premium for guaranteed benefits, assumes that mortality will be heavier than is likely to be experienced, and thitt the interest earned will be at a lower Tate than will probably be obtained. He errs, if at all, in making sure that the life office will receive something more than the actual cost of a non-profit policy. • The participating policy holders, on the other hand, may obtain their assurance at cost price, or even less, because in most companies they share in the profits that are made out of non-participating assurance and annuities.

On the other band, they may in fact pay more than their life assurance actually costs, because the whole surplus that is earned is not distributed. A stringent valuation is adopted, and strong reserves are set aside. These provide not merely a large margin of security, but a capacity for earning profits which make sure of main- tainnig a high rate of bonus, and perhaps of increasing it in the future.

The strengthening of the security and bonus-earning capacity of an office is essential and excellent up to a point, but it may result in some injustice and disadvan- tage, especially to policy holders of an advanced age who receive less than they might for the time being, in order that future prosperity, which they will not sharel may be secured. If this process is carried too fail participating assurance may become disadvantageous as compared with non-profit policies. . Another point of importance is the increase in the 'difference between the rates of premium for the two classes of assurance. The rates for non-profit policies • have been falling, while those for participating assurance - have remained substantially as they were, although the policy holders have reaped the benefit of higher interest and lower mortality through the larger bonuses that are being declared. Bonuses, however, are a deferred benefit, while a low rate of premium gives from the outset a much larger amount of assurance protection than can be obtained at the same cost under with-profit policies. At the present time there is, happily, increasing recogni- tion of the need for, and importance of, life assurance protection for dependents, and a high rate of premium, even though accompanied by large future bonuses, does not wholly meet this requirement. It is true that under the special system of the Scottish . Provident Institution, and the discounted bonus plan which many offices adopt, low premiums are combined with participation in the profits. Under such plans, the amount of assurance given from the commencemenit for a premium of, say, £100 a year, is nearly as much as can be obtained under non-participating assurance, and after a few years, even with the small bonus appro- priate to a low rate of premium, the sum assured is greater under the with-profit than it is under the non-profit policy. - It would seem probable and-desirable that the premiums and bonuses for participating assurance should reduced, or that increasing attention should be paid the special-plans under which these conditions can be