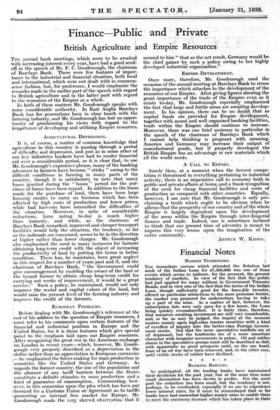 THE immediate success which attended the flotation last week of the Indian Loan for £7,500,000 was one of those events which seems to indicate, for the moment, the present tendency of markets. In view of the tact that the public had just applied for many millions in Government Treasury Bonds, and in view also of the fact that the terms of the Indian Loan, though sufficiently good for the -bona-fide investior, offered no particular attractions to the mere premium hunter, the market was prepared for underwriters having to take up a part of the issue. As a matter of fact, however, the subscription lists were only open for a few hours, the Loan being quickly oversubscribed. It is fairly clear, therefore, that resources awaiting investment are still very considerable, and, so far as may be judged, the inquiry at the moment centres mainly upon high-class trustee securities with a kind of overflow of inquiry into the better-class ForeignGovern- ment stocks. Not that the more speculative markets are at all depressed, but the tendencies are of a more uncertain character with irregular movements in prices. Oil and rubber shares in the speculative groups must still be described as dull, with apparently no great prospects until, on the one hand, fears of an oil war have been removed, and, in the other case, until visible stocks of rubber have declined.