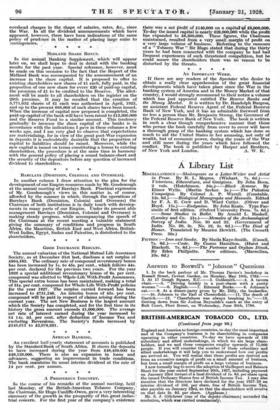 If there are any readers of the Spectator who desire to obtain a really clear apprehension of the great financial developments which have taken place since the War in the banking system of America and in the Money Market of that country, I would strongly recommend to their notice a volume which has just appeared entitled The Reserve Banks and the Money Market. It is written by Dr. Randolph Burgess, an assistant Federal Reserve Agent of the Federal Reserve Bank" Of NeW York; and it has an admirable foreword from no less a person than Mr. Benjamin Strong, the Governor of the Federal Reserve Bank of New York. The book is written in such a clear though comprehensive manner that those who peruse the book carefully from cover to cover will have a thorough grasp of the -banking system which- has-done so much to aid the United States in her amassing, not only of Wealth, but of economic power, during the years of the War and still more dining the years which have followed the confliot. The book is published b7 Harper , and Brothers,