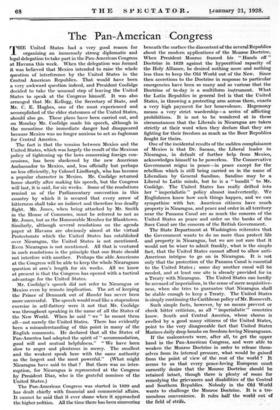 THE United States had a very good reason for organizing an immensely strong diplomatic and legal delegation to take part in the Pan-American Congress at Havana this week. When the delegation was formed it was believed that Mexico intended to raise the whole question of interference by the United States in the Central American Republics. That would have been a very awkward question indeed, and President Coolidge decided to take the unusual step of leaving the United States to speak at the Congress himself. It was also arranged that Mr. Kellogg, the Secretary of State, and Mr. C. E. Hughes, one of the most experienced and accomplished of the elder statesmen of the United States, should also go. These plans have been carried out, and on Monday Mr. Coolidge made his speech, although in the meantime the immediate danger had disappeared because Mexico was no longer anxious to act as fugleman for Central America.

The fact is that the tension between Mexico and the United States, which was largely the result of the Mexican policy of tightening up the laws concerning foreign con- cessions, has been slackened by the new American Ambassador to Mexico, and, less officially but perhaps no less efficiently, by Colonel Lindbergh, who has become a popular character in Mexico. Mr. Coolidge returned home shortly after making his speech, but the Congress will last, it is said, for six weeks. Some of the resolutions remind us of the Parliamentary convention in this country by which it is secured that every arrow of bitterness shall take an indirect and therefore less deadly flight. Mr. Jones, when being attacked by MT. Smith in the House of Commons, must be referred to not as Mr. Jones, but as the Honourable Member for Blanktown. Similarly, although several resolutions on the agenda paper at Havana are obviously aimed at the virtual Protectorate which the United States has established over Nicaragua, the United States is not mentioned. Even Nicaragua is not mentioned. All that is ventured in such resolutions is the principle that one State should not interfere with another. Perhaps the able Americans at the Congress will be able to keep the whole Nicaraguan question at arm's length for six weeks. All we know at present is that the Congress has opened with a tactical advantage for the United States.

Mr. Coolidge's speech did not refer to Nicaragua or Mexico even by remote implication. The art of keeping the Prince of Denmark out of Hamlet has never been more successful. The speech would read like a stupendous exercise in self-flattery were it not that Mr. Coolidge was throughout speaking in the name of all the States of the New World. When he said " we " he meant them all—not merely the United States. There has evidently been a misunderstanding of this point in many of the English comments. He declared that all the States of Pan-America had adopted the spirit of" accommodation, good will and mutual helpfulness." "We have been slow to anger and plenteous in mercy. The smallest and the weakest speak here with the same authority as the largest and the most powerful." (What might Nicaragua have said to that ? But there was no inter- ruption, for Nicaragua is represented at the Congress by President Diaz, who is the grateful nominee of the United States.) The Pan-American Congress was started in 1899 and has dealt chiefly with financial and commercial affairs. It cannot be said that it ever shone when it approached the higher politics. All the time there has been simmering beneath the surface the discontent of the Several Republics about the modern applications of the Monroe Doctrine. When President Monroe framed his "Hands off" Doctrine in 1828 against the hypocritical rapacity of the Holy Alliance, he desired nothing more and nothing less than to keep the Old World out of the New. Since then accretions to the Doctrine in response to particular emergencies have been so many and so various that the Doctrine of to-day is a multiform instrument. What the Latin Republics in general feel is that the United States, in throwing a protecting arm across them, exacts a very high payment for her benevolence. Hegemony means a very strict wardership—a series of afflicting prohibitions. It is not to be wondered at in these circumstances that the Liberals in Nicaragua are taken strictly at their word when they declare that they are fighting for their freedom as much as the Boer Republics fought for theirs.

One of the incidental results of the sudden complaisance of Mexico is that Dr. Sacasa, the Liberal leader in Nicaragua, in default of further help from Mexico, acknowledges himself to be powerless. The Conservative Government reigns in peace—in peace except for the rebellion which is still being carried on in the name of Liberalism by General Sandino. Sandino may be a Liberal to Latin minds, but he is a " bandit " to Mr. Coolidge. The United States has really drifted into her " imperialistic " policy almost inadvertently. We Englishmen know how such things happen, and we can sympathize with her. American citizens have much property in Nicaragua, and peace and order in all territory near the Panama Canal are as much the concern of the United States as peace and order on the banks of the Suez Canal are the concern of the British Government.

The State Department at Washington reiterates that the Government wants to do no more than protect life and property in Nicaragua, but we are not sure that it would not be wiser to admit frankly, what is the simple fact, that the United States cannot afford to allow anti- American intrigue to go on in Nicaragua. It is not only that the protection of the Panama Canal is essential to the United States ; some day another canal will be needed, and at least one site is already provided for -in a Treaty with Nicaragua. The United States can hardly be accused of imperialism, in the sense of mere acquisitive- ness, when she tries to guarantee that Nicaragua shall be stable enough to keep a Treaty. The United States is simply continuing the Caribbean policy of Mr. Roosevelt.

Such simple facts, however, by no means prevent or check bitter criticism, as all " imperialistic " countries know. South and Central America, whose chorus is swelled by a good many citizens of the United States, point to the very disagreeable fact that United States Marines daily drop bombs on freedom-loving Nicaraguans.

If the malcontents were, after all, to get the upper hand in the Pan-American Congress, and were able to weaken the Monroe Doctrine in order to release them- selves from its internal pressure, what would be gained from the point of view of the rest of the world ? It seems to us that every peace-loving European must earnestly desire that the Monroe Doctrine should be retained intact, though there is plenty of room for remedying the grievances and disabilities of the Central and Southern Republics. Nobody in the Old World wants to challenge the Monroe Doctrine. It is a tre- mendous convenience. It rules half the world out* of the field of strife.