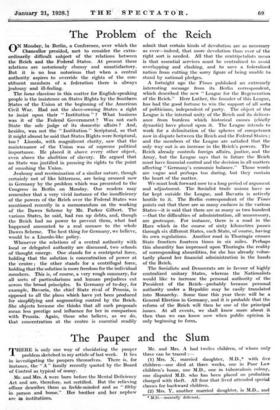 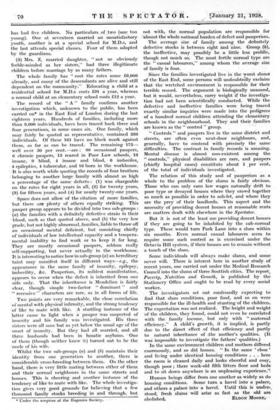 The Pauper and the Slum

THERE is only one way of elucidating the pauper problem sketched in my article of last week. It lies in investigating the paupers themselves. There is, for instance, the " A " family recently quoted by the Board of Control as typical of many.

Mr. and. Mrs. A were born before the Mental Deficiency Act and are, therefore, not certified. But the relieving officer describes them as feeble-minded and as "filthy in person and home." Her brother and her nephew are in institutions. Mr. and Mrs. A had twelve children, of whom only three can be traced :- (I) Mrs. X, married daughter, • M.D.,* with five children—one died at three weeks, one in Poor Law children's home, one M.D., one in tuberculosis colony, one disputed M.D. who has been placed on probation charged with theft. All four that lived attended special classes for backward children.

(2) Mrs. V, another married daughter, is M.D., and • M.D.—mentally deficient', has had five children. No particulars of two (one too young). One at seventeen married an unsatisfactory youth, another is at a special school for M.D.s, and the last attends special classes. Four of them. adopted by the guardians.

(8) Mrs. Z, married daughter, "not so obviously feeble-minded as her sisters," had three illegitimate children before marriage by as many fathers.

The whole family has "cost the rates some £6,000 already, and many of the descendants are alive and still dependent on the community." Educating a child at a • residential school for M.D.s costs £91 a year, whereas a normal child at an elementary school costs 112 a year. - The record of the " A " family confirms another investigation which, unknown to the public, has been - carried on* in the -East End of London during the last eighteen years. Hundreds of families, including more than 8,000 individuals, have been traced back three and • four generations, in some cases six. One family, which • may fairly be quoted as representative, contained 336 individuals. Of these 161 have no black mark against them, as far as can be traced.- The remaining • 175— well over 50 per cent.—are : 98 occasional paupers, 6 chrcinic paupers, 15 reared in -Poor Law schools, 13 insane,- 9 blind, 4 insane and blind, 6 imbeciles, 4 epileptics, 4 tubercular, and 16 born in the workhouse.

• It is also worth while quoting the records of four brothers belonging to another large family with almost as high a percentage of the same defects : (1) was chargeable on the rates for eight years in all, (2) for twenty years, ' (8) for fifteen years, and (4) for nearly twenty-one years. Space does not allow of the citation of more families, but there are plenty of others equally striking. This • pauper group appears to be divided into two sub-groups : (a) the families with a definitely defective strain in their • blood, such as that quoted above, and (b) the very low grade, but not highly abnormal, families, liable to throw off an occasional mental deficient, but consisting chiefly of individuals of low intellectual capacity and a tempera- mental inability to find work or to keep it for long. They are mostly occasional paupers, seldom really self-supporting, but never actually in the workhouse. It is interesting to notice how in sub-group (a) an hereditary • taint may manifest itself in different ways—e.g., the appearance in the same family of insanity, epilepsy, imbecility, &c. Pauperism, its mildest manifestation, appears to occur when the -defect is inherited from one side only. That the inheritance is Mendelian is fairly -clear, though simple two-factor " dominant " and • " recessive" characters are rare, as in all forms of life.

• Two points are very remarkable, the close correlation of mental with physical infirmity, and the strong tendency of like to mate with like. A startling instance of the latter came to light when it pauper Was suspected of • insanity and his family was investigated. His three sisters were all sane but as yet below the usual age' of the onset of insanity. But they had all married, and all three husbands had been in lunatic asylums. One of them (though neither knew it) turned out to be the uncle of his wife.

• Whilst the two sub-groups (a) and (b) maintain their identity from one generation to another, there is 'considerable cross-breeding between them. On the other band, there is very little mating between. either of them and their normal neighbours in the same streets and houses. This is cheering and another instance of the tendency of liketo mate with like. The -whole investiga- tion gives very good grounds for believing that a few -thousand family stocks breeding in and through, but *Under the novices of the Eugenics Society. --- not with, the normal population are responsible for Vinost the Whole national burden of defect and pauperism. The average size of family among the definitely . defective stocks is between eight and 'nine: Group Pt), the ineffective, may possibly be a little less prolific, though not much so. The most fertile normal 'type are the "casual labourers," -among 'whom the average size of family is four.

Since the families investigated live in the worst slums of the East End, some persons will undoubtedly exclaim that the' wretched environment is responsible for " their terrible record. The argument is biologically 'unsound, but it would, nevertheless, carry Weight if the investiga- tion had not been scientifically conducted. While the defective and ineffective families were being traced exactly similar inquiries were made into the pedigrees of a hundred normal children attending the elementary schools in the neighbourhood. - They and their families are known as the" control" group. , " Controls " and paupers live in the same district and streets, are often, even next-door neighbours, . and, generally, have to contend with precisely the same difficulties. The contrast in family records is amazing. Mental disease is almost non-existent among the "controls," physical disabilities are rare, and paupers (chiefly hospital cases) constitute about 1 , per Cent. of the total of individuals investigated.

The relation of this study and of pauperism as a whole to the problem of the slums is fairly- obvious.

Those who can only earn low wages naturally drift to poor type or decayed houses where they crowd together as much as possible in order to sub-let, and where they are the prey of their landlords. This aspect and the necessity of providing decent houses at reasonable rents are matters dealt with elsewhere in the Spectator. , But it is not of the least use providing decent houses if they .are going to be inhabited by the sub-normal type. These would turn Park Lane into a slum within six months. Even normal casual labourers seem to require some such control as is exercised under the Octavia Hill system, if their houses are to remain without a touch of the slum.

Some individuals will always make slums, and some never will. There is interest here in another study of recent years, one carried out under the Medical Research Council into the slums of three Scottish cities. The report, Poverty, Nutrition and . Growth, is published by the Stationery Office and ought to be read by every social worker.

. The investigators set out confessedly expecting to fuld that slum conditions, poor food, and so on were responsible for the ill-health and stunting -of the children.

The expectation was not realized. The height and weight of the children, they found, could not even be correlated with the family income, but only with "maternal efficiency." A child's growth, it is implied, is partly due to the direct effect of that efficiency and partly to natural inheritance of the mother's qualities. (It was impossible to investigate the fathers' qualities.) In the same environment children and mothers differed enormously, and so did homes. "In the same 'close', and living under identical housing conditions . . . here the room is cleaned daily and looks cheerful and cosy, though poor ; there week-old filth litters floor and beds and to sit down anywhere is an unpleasing experience, Human beings differ front one another as widely as do 'housing conditions. Some tutn a hovel 'into- a -palace, and others a palace into a hovel. Until this is under., 'stood, fresh sluins will arise as fast as the old -are