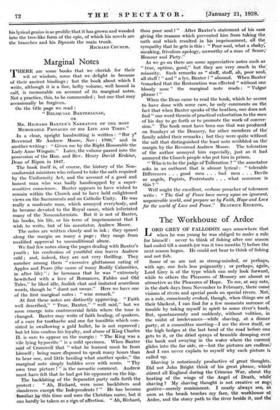 THERE are some books that we cherish for their wit or wisdom, some that we delight in because of their ancient bindings; but the book about which I write, although it is a fine, hefty volume, well bound in calf, is memorable on account of its marginal notes. Not a practice, this, to be commended; but one that may occasionally be forgiven. On the title page we read:

" RELIQUIAE BAXTERIANAE, OR • MR. RICHARD BAXTER'S NARRATIVE OF THE MOST MEMORABLE PASSAGES OF HIS LIFE AND TIMES."

In a clear, upright handwriting is written: " ffor ye Reverend Mr Andrew Moore, Nov : 1700," and in another writing: "Given me by the Right Honorable the Lady Anne Wingate." Later, the volume passed into the possession of the Hon. and Rev. Henry David Erskine, Dean of Ripon in 1847. The book itself is, of course, the history of the Non- conformist ministers who refused to take the oath required by the Uniformity Act, and the account of a good and honest man who was badly handicapped by a super- sensitive conscience. Baxter appears to have wished to remain within the Church and to have held enlightened views on the Sacraments and on Catholic Unity. He was really a moderate man, which annoyed everybody, and he became devoted to the Royal cause, which infuriated many of the Nonconformists. But it is not of Baxter, his books, his life, or his term of imprisonment that I wish to write, but of his annotator, Andrew Moore. The notes are written closely and in ink; they sprawl along the margin on many a page; they range from modified approval to unconditional abuse. We find few notes along the pages dealing with Baxter's youth; his confession of youthful sins leaves Andrew cold; and, indeed, they are not very thrilling. They number among them "excessive gluttonous eating of Apples and Pears (the cause of many Bodily Calamities, in after life) " ; he bemoans that he was "extremely bewitched with a love of Romances, Fables and Old Tales," he liked idle, foolish chat and imitated scurrilous words, though he "durst not swear." Here we have one of the first marginal notes: "wise remark." At first these notes are distinctly approving. "Faith well described," "True, Baxter," "well said," but we soon emerge into controversial fields where the tone is changed. Baxter may write of faith healing, of quakers, of a cure for toothache and one for tonsilitis which con- sisted in swallowing a gold bullet, he is not reproved ; but let him confess his loyalty, and abuse of King Charles H. is sure to appear on the margin: "The King was a vile lying hypocrite" is a mild specimen. When Baxter , said of Cromwell that •" what he learned must be from himself; being more disposed to speak many hours than to hear one, and little heeding what another spoke," the marginal note simply bubbles over with scorn. "Thy own true picture ! " is the sarcastic comment. Andrew must have felt that he had got his opponent on the hip. The backbiting of the Separatist party calls forth the protest: " Ah, Richard, were none backbiters and slanderers except the Independents ? " He has become -familiar Jay -this time and uses the Christian name, but it can hardly be taken as a sign of affection. " Ah, Richard, thou poor soul I" . After Baxter's statement of his case giving the reasons which prevented him from taking the oath and which resulted in his imprisonment, all the sympathy-that he gets is this : "Poor soul, what a shaky; sneaking, frivolous apology,- unworthy of a man of Sense,' Honour and Piety." As we go on there are some appreciative notes sueh as " true, optime, good," but they are very much in the' minority. Such remarks as "stuff, stuff, ah, poor soul; all stuff! " and " a lye, Baxter! "abound. When Baxter' remarked that the Restoration was effected "-without one bloody nose" the marginal note reads:' -" Vulgar phrase ! " When the Dean came to read the book, which he seems to have done with some care, he only comments on the fact that when Baxter speaks of the heathen, one does not find" one word therein of practical exhortation to the men of his day to go forth or to promote the work of conver-' sion." The book must have been one that was produced on Sundays at theDeanery, for other members of the'. family added their remarks; but they were quite without the salt that distinguished- the least note scribbled on the margin by the Reverend Andrew Moore. The toleration of the author annoyed him especially, just as it had annoyed the Church people who put him in prison, "Who isto be the judge of Tolleration ? "the annotator asks in an outburst that is almost lyrical : " tolerable Differences . . . good men . . . bad men . . . Devils or angels, Papists, Protestants . . , what nonsense is this ? " Well might the excellent, verbose preacher of tolerance write: "The God of Peace have mercy upon an ignorant,' unpeaceable world, and prepare us by Faith, Hope and Love for the world of Love and Peace." BEATRICE ERSKINE.,