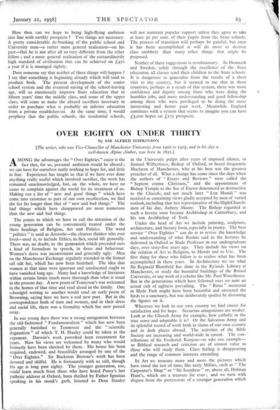 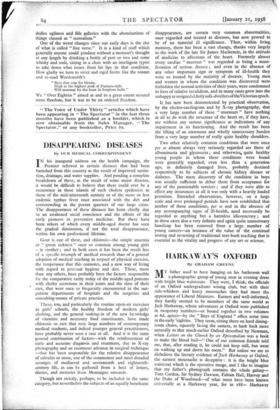 OVER EIGHTY ON UNDER THIRTY

[The writer, who was Vice-Chancellor of Manchester University from 1900 to 1913, and in his day a well-known Alpine climber, was born in 1851.] AMONG the advantages the " Over Eighties" enjoy is the fact that, for us, personal ambition would be absurd ; we can have for ourselves really nothing to hope for, and little to fear. Experience has taught us that if we have ever done anything really useful which involved sacrifice, the work has remained unacknowledged, but, on the whole, we have no cause to complain against the world for its treatment of us. Making out a list of " new and good things " which have come into existence as part of our own recollection, we find the list far longer than that of " new and bad things." The bad things which have disappeared are more numerous than the new and bad things.

The points to which we have to call the attention of the young generation can be conveniently treated under the three headings of Religion, Art and Politics. The word " politics " is used as Aristotle—the clearest thinker who ever lived—used it, to include Ethics, ins fact, social life generally. There was, no doubt, in the generatioh which preceded ours a kind of formalism in speech, in dress and behaviour. Women's dress was inconvenient and generally ugly. Men on the Manchester Exchange regularly attended in the formal tall silk hat, which has now been banished. The idea that women at that time were ignorant and uneducated ought to have vanished long ago. Many had a knowledge of literature within certain limits much more thorough than what is usual in the present day. A new poem of Tennyson's was welcomed in the homes of that time and read aloud in the family. One schoolgirl writing to another would send an early poem of Browning, saying here we have a real new poet. But in the correspondence both of men and women, and in their dress and social life, there was a formality which has now passed away.

In our young days there was a strong antagonism between the old-fashioned " Fundamentalism " which has now been generally banished to Tennessee and the " scientific dogmatism " of which T. H. Huxley could be taken as the exponent. Darwin's work provoked keen resentment for years. Now his views are welcomed by many who would formerly have been shocked by them. His house has been acquired, endowed, and beautifully arranged by one of the " Over Eighties." Sir Buckston Browne's work has been devoted and skilful. He is fortunately with us still, though his age is long past eighty. The younger generation, too, could learn much from those who have heard Pusey's last pathetic address at Oxford, been thrilled by Father Ignatius speaking in his monk's garb, listened to Dean Stanley in the University pulpit after years of imposed silence, or Samuel Wilberforce, Bishop of Oxford, or heard frequently Maclaren of Manchester, who at his best was the greatest preacher of all. What a change has come since the days when the authors of " Essays and Reviews " were called the " Septem contra Christum," and the appointment of Bishop Temple to the See of Exeter denounced as destructive to the Church; and not much later " Lux Mundi " was received as containing views gladly accepted by men of varied outlook, including that last representative of the High Church- men of his day, Aubrey Moore. The Bishop regarded as such a heretic soon became Archbishop at Canterbury, and his son Archbishop of York.

Under the head of Art we include painting, sculpture, architecture, and literary form, especially in poetry. The best service " Over Eighties " can do is to revive the knowledge and understanding of what Ruskin said in the lectures he delivered in Oxford as Slade Professor in our undergraduate days, over sixty-five years ago. They include his views on the relation of Art to Religion, to Morals and to Use. The first thing for those who follow is to realise what has been accomplished in these years. In Architecture we see what Sir Reginald Blomfield has done in the Rylands Library at Manchester, or study the beautiful buildings of the Bristol University, or any work of a scholar like Mr. Paul Waterhouse. But in the generations which have followed ours we note an actual cult of ugliness prevailing. The " Rima " memorial in Hyde Park might have been beautiful and attracted the birds to a sanctuary, but was deliberately spoiled by distorting the figures on it.

Wherever we look in our own country we find causes for satisfaction and for hope. Sectarian antagonisms are weaker. Look at the Church Army for example, how catholic in the true sense and adaptable it is ! Or the Salvation Army and its splendid record of work both in slums of our own country and in dark places abroad. The activities of the Bible Society are increasing and world-wide in extent. The con- tributions of Sir Frederick Kenyon—to take one example— to Biblical research and criticism are of utmost value to those who will study them. Class feeling is disappearing and the range of common interests extending.

In Art we treasure more and more the pictures which have stood the test of time, like early Millais, such as " The Carpenter's Shop " or " Sir Isumbras " or, above all, Holman Hunt's, which are a treasure for ever ; and we turn with disgust from the pretensions of a younger generation which deifies ugliness and fills galleries with the abominations of things classed as " surrealism."

One of the worst changes since our early days is the rise of what is called " free verse." It is a kind of stuff which generally anyone could produce without a moment's thought at any Length by drinking a bottle of port or two and some whisky and soda, sitting in a chair with an intelligent typist to take down what issues from his lips in that ' condition., How gladly we turn to strict and rigid forms like the sonnet and re-read Wordsworth's

" Bees that soar for bloom, High as the highest peak of Furness-fells Will murmur by the hour in foxglove bells."

We " Over Eighties " aimed at and to a great extent secured more freedom, but it was to be an ordered freedom.