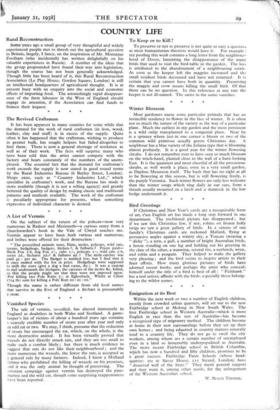 Rural Reconstruction Some years ago a small group of very thoughtful and widely experienced people met to thresh out the agricultural question in Britain, largely, I fancy, on the inspiration of Mr. Montague Fordham (who incidentally has written delightfully on his valuable experiences in Russia). A number of the ideas that the group propounded have found their way into legislation, though the source has not been generally acknowledged. Though little has been heard of it, this Rural Reconstruction Association (Le Play House, Gordon Square, London) is still an intellectual headquarters of agricultural thought. It is at present busy with an enquiry into the social and economic effects of importing food. The astonishingly rapid disappear- ance of the farm labourer in the West of England should engage its attention, if the Association can find funds to finance their inquest.