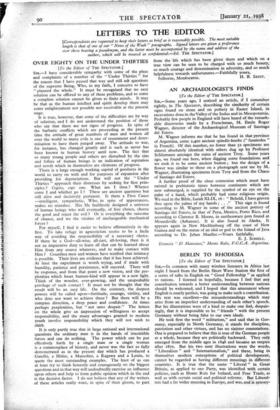 [Correspondents are requested to keep their letters as brief as is reasonably possible. The most suitable length is that of one of our " News of the Week" paragraphs. Signed letters are given a preference over those bearing a pseudonym, and the latter must be accompanied by the name and address of the author, which will be treated as confidentiaL—Ed. THE SPECTATOR.] OVER EIGHTY ON THE UNDER THIRTIES [To the Editor of THE SPECTATOR.]

SIR,—I have considerable sympathy with some of the pleas and complaints of a number of the " Under Thirties " for the reason that I have passed that way and still ask questions of the supreme Being, Who, in my faith, I conceive to have " planned the whole." It must be recognised that no easy solution can be offered to any of these problems, and to some a complete solution cannot be given to finite minds. It may be that as the human intellect and spirit develop there may come enlightenment not possible nor receivable at the present, stage.

It is true, however, that some of the difficulties are by way of solution, and I do not understand the position of those who say that there are not signs of progress. In spite of the barbaric conflicts which are proceeding at the present time the attitude of great numbers of men and women all over the world to many evils is one of resentment and deter- mination to have them purged away. The attitude to war, for instance, has changed greatly and is such as never has been known in human history until now. The fact that so many young people and others are disturbed by the sins and follies of human beings is an indication of aspiration and revolt which in themselves are elements of progress.

There is a large enough working capital of goodness in the world to carry on with and for purposes of expansion after providing for depreciations. But will not the " Under Thirties " approach their distresses by seeking for first prin- ciples ? Cogito, ergo sum. What am I then ? Whence come I and whither go I ? These are ancient questions but still alive and decisively pertinent. Is there a First Cause —intelligent, sympathetic, Who, in spite of appearances, makes no mistakes, Has He faultlessly designed a universe of human beings who will eventually, of free choice, choose the good and reject the evil ? Or is everything the outcome of chance, and we the victims of unchangeable mechanical forces ?

For myself, I find it easier to believe affirmatively in the first. To take refuge in agnosticism seems to be a facile way of avoiding the responsibility of a necessary choice. If there be a God—all-wise, all-just, all-loving, then is it not an imperative duty to learn all that can be learned about Him from any source whatever, and to make contact with Him ? Countless men and women have testified that intimacy is possible. Their lives are evidence that it has been achieved. At least the experiment is worth trying, and if made with humility, patience and persistence, will succeed. There will be response, and from that point a new vision, and the per- plexities which beset human-kind will appear in a new light. Think of the wonder, ever-growing, and the unspeakable privilege of such contact ! It must not be thought that the result will be an easy life. On the contrary, the deepest powers will be called upon—fortitude, courage, virility, and who does not want to achieve these ? But there will be a compass direction, a deep peace and confidence. At times perhaps perplexities, but " not unto despair." The letters on the whole give an impression of willingness to accept responsibility, and the many advantages granted to modern youth involve responsibility which they will not wish to shirk.

It is only partly true that in large national and international questions the ordinary man is in the hands of irresistible forces and can do nothing. The power which can be put effectively forth by a single man or a single woman is a commonplace of history, and never was the fact so fully demonstrated as in the present day which has produced a Gandhi, a Hitler, a Mussolini, a Kagawa and a Lenin, to

quote the most outstanding examples. The least of us can at least try to think honestly and courageously on the biggest questions and in that way will undoubtedly exercise an influence upon others and help to form public opinion which in the end is the decisive factor. I do not believe that any of the writers of these articles really want, in spite of their gloom, to part.

from the life which has been given them and which on a true view can be seen to be charged with so much beauty, so much courage and determination in adversity, and so much helpfulness towards unfortunates.—Faithfully yours,