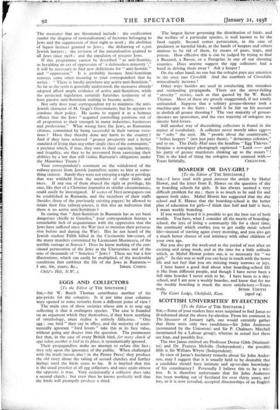 Sta,—Sir W. Beach Thomas contributes another of his pin-pricks for the oologists. Is it not time your columns were opened to some remarks from a different point of view ?

The main case of those societies whose aim is to stop egg collecting is that it endangers species. The case is founded on an argument which they themsehies, if they know anything of ornithology, must realise is entirely fallacious. " One egg : one bird " they say in effect, and the majority of senti- mentally ignorant " bird lovers " take this at its face value, without going any deeper into the question. The paramount fact that, in the case of every British bird, for every clutch of eggs taken another is laid in its place, is systematically ignored.

Their propagandists make no attempt to refute this fact ; they rely upon the ignorance of the public. When challenged with the truth (never, alas ! in the Penny Press) they produce the old story about the taking of second clutches and further layings until the birds cease to lay. It is implied that this is the usual practice of all egg collectors, and once again almost the opposite is true. Very occasionally a collector does take a second clutch ; but even then he knows perfectly. well that the birds will promptly produce a third. The largest factor governing the distribution of birds, and the welfare of a particular species, is well known to be the food supply. Second comes persecution, in the case of predatory or harmful birds, at the hands of keepers and others anxious to be rid of them, by means of guns, traps, and poison. How effective this is can be judged by trying to find a Buzzard, a Raven, or a Peregrine in one of our shooting counties. Does anyone suggest the egg collectors had a hand in driving them away ? Ask a keeper !

On the other hand, no one but the oologist pays any attention to the once rare Crossbill. And the numbers of Crossbills miraculously increase !

Other ways besides are used in conducting this mistaken and misleading propaganda. There are the never-failing " atrocity " stories, such as that quoted by Sir W. Beach Thomas. Most of these are grossly exaggerated, if not totally unfounded. Suppose that a solitary grouse-shooter took a machine-gun to the butts : would it be fair on his account to abolish all grouse shooting ? The vast majority of grouse- shooters are sportsmen, and the vast majority of oologists are sincere bird-lovers.

Still another way of discrediting collectors is found in the matter of vocabulary. A collector never merely takes eggs—

he " robs " the nest. He " prowls about the countryside," " bribes keepers " (not just pays them), " devastates colonies,"

and So on. The Daily Mail uses the headline " Egg Thieves." Imagine a newspaper photograph captioned " Lord — and his party of grouse murderers slinking up to the moors " ! This is the kind of thing the oologists most contend with.—