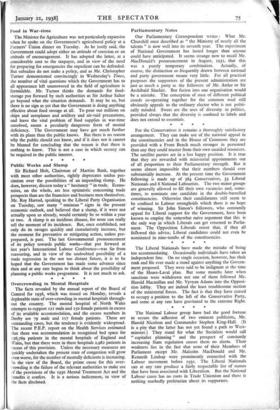 Page 3, 21 January 1938 — Overcrowding in Mental Hospitals The facts revealed by the annual
Close

Overcrowding in Mental Hospitals The facts revealed by the annual

report of the Board of Control for 1936, which was issued on Monday, reveals a deplorable state of over-crowding in mental hospitals through- out the country. The mental hospital of North Wales attempts to support 121 male and 15o female patients in excess of its available accommodation, and the excess numbers in Derby are 79 male and 117 female patients. These are outstanding cases, but the tendency is evidently widespread. The recent P.E.P. report on the Health Services estimated that there was accommodation in recognised bed space for 126,769 patients in the mental hospitals of England and Wales, but that there were in these hospitals 2,982 patients in excess of this provision. Unless the necessary measures are quickly undertaken the present state of congestion will grow even worse, for the number of mentally deficients is increasing. In the view of the Board, the prime cause for this over- crowding is the failure of the relevant authorities to make use of the provisions of the 193o Mental Treatment Act and the benefits it confers. It is a serious indictment, in view of the facts disclosed.